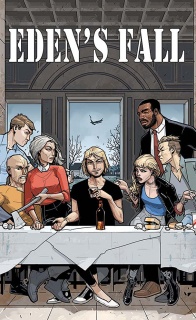 Top Cow combines three of its most provocative titles (THINK TANK, THE TITHE, POSTAL) in an unflinching fable of revenge and consequence. FBI Agent James Miller (THE TITHE) follows a sociopath into the off-the-grid town of Eden, Wyoming on a personal mission of vengeance. The price of this vigilante justice will be paid in blood, and both Eden and James Miller will never be the same.

Eden’s Fall is the combination of a lot of relatively obscure and it’s probably important we do a quick recap of what those things are.

1.) “The Tithe” is about a criminal hacktivist who robs money from churches and donates them to charity. The FBI recruits her and they go on to solve other cases.

2.) “Think Tank” follows a guy who was recruited to DARPA at age fourteen to create weapons for the government. Deciding he no longer wants to be responsible for the deaths of thousands, he escapes from the weapons manufacturing game and ends up on the run.

3.) “Postal” takes place in the town of Eden, Wyoming where criminals of all stars and stripes live out regular lives while hiding out from their past.

Now that we’re all caught up, “Eden’s Fall” is a crossover between all three of these series as the characters from “The Tithe”, teaming up with the scientist in “Think Tank” try to infiltrate Eden so they can arrest a right-wing terrorist responsible for blowing up churches. You know, the usual.

“Eden’s Fall” is in a very weird spot because while it’s three series (that I haven’t read, sorry) coming together, the plot feels like it could stand on its own. Federal agents sneaking into a town of criminals so they can catch their man? Great, slap a sticker on it and send that bad boy over to FX. The problem is that, since this is three stories come together for what’s more or less a big crossover, we’re kind of speeding past who these people are. Sure, there’s a lot of exposition that explains who everyone is but it all feels pretty blatant. It’s like an action movie that’s about 80% done because everyone’s backgrounds were covered in a title card at the beginning. So it’s like Star Wars. Maybe this was a bad example.

Aside from that weird unfinished feeling, which I should make clear has a whole lot to do with me having never read “The Tithe”, “Think Tank”, or “Postal”, “Eden’s Fall” starts with a very strong premise. While some of the characters feel like you need to have read their books to really dig into, Mayor Laura Shiffron ended up being a huge highlight of the book for me. She’s the mayor of Eden, in charge of keeping its cover story and the cover story of every criminal who paid a lot of money to hide out in her town. She’s a dynamic character, in that tradition of people doing the wrong thing you still wanna cheer for (think Tony Soprano or Walter White). And I can only guess, if you’ve been following along with these three titles, that there’s a major delight to be had in all these characters you’re rooting for clashing together like this.

The art in “Eden’s Fall” has a notable use of light and shadow in the art, which helps propel the whole true crime vibe we’re striving for here. And when it comes to scenes like an ex-FBI agent being smuggled into a community of criminals by guys in hockey masks, the use of shadows makes for a compelling scene. Unfortunately, some characters look like they’re overacting with exaggerated faces that briefly took me out of the story. Aside from that, “Eden’s Fall” does a great job in maintaining the dark, violent kind of atmosphere the town of Eden exists in.

Final Verdict: 6.8 – Overall, I’d suggest giving any of the books that relate to “Eden’s Fall” a try before diving into this comic. It’s a good comic with a great premise, but it’s lacking the edge that makes me really ant to suggest it to people. That edge might be in “Think Tank”, “Postal”, and or “The Tithe” but I didn’t really see it in “Eden’s Fall” #1. Still, it’s an interesting idea for three comics that are relatively realistic to have a big crossover like this, and it’s the kind of thing I’d like to see more of in indie comics. As a first impression however, “Eden’s Fall” left me wanting just a little bit more. That little bit just happens to possibly live in three other comics. Sorry that I don’t have any final answer here, since I haven’t read the other comics but I hope you enjoyed Schrodinger’s review.