DC Comics lore is rich with story potential within its vast narrative tapestry. Like any good superhero universe, it’s packed full of alternate futures, Earths, and other settings, so it seems strange that mainstream DC only focuses on a short amount of time and space. Enter “Electric Warriors” #1. Steve Orlando and Travel Foreman are set to explore the unknown in a future after the already dystopian future of Jack Kirby’s “Kamandi”. Will they find success, or will the book fall short? 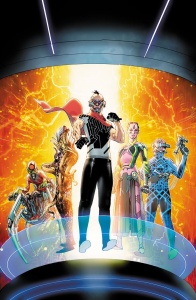 Cover by Travel Foreman and Hi-Fi

Years after the Great Disaster, the Earth has started to rebuild and rejoin the universal coalition. In order to prevent a galactic war, different worlds throughout the known cosmos have created a new system of competitive combat to give each participating planet their own voice in the intergalactic struggle. Each world has one diplomatic gladiator, chosen to possess the Electric Seed and fight for their homeland as the Electric Warrior! Each fighter forsakes their personal life in the name of peace.

So what happens when Earth can’t choose a single combatant and sends two instead? The bruiser War Cry represents the humans of Earth, while Deep Dweller, a shape-shifter from the Octopus Tribe, represents the animal kingdom. Can they maintain one common goal, or will they tear Earth’s tenuous coexistence to shreds and destroy the rest of the universe with it? Oh, and War Cry also has a powerful relic from Earth’s past: Superman’s cape!

With the titling of this era as the Cosmic Dark Age, there come certain expectations, and Orlando delivers on them with his characters, specifically Ian Navarro, War Cry himself. In the Navarro family, it’s expected that the nobler Oscar will take the Warrior name and split the electric seed. However, we get Ian, a tortured, aggressive soul who misguidedly fights for his brother’s innocence, for him to not have to fight for the sake of humans and animals. It’s an idea that shows him as trying to fight for those in need, yet still shows him as a corrupted character because he refuses to do so for other races. On the other hand, we have the innocent and good-natured Kana. She is eager to accept the exotic traits of the universe above her ocean, yet exists in a naivety that may as well be a dark age within itself. Orlando finds a careful balance between these two characters that ends in a careful respect for each other when they finally meet, to the reader’s satisfaction.

Of course, we couldn’t examine an aspect of the DC universe set in a new alternate future without examining said future too. What Orlando gives us here is a natural, yet not necessarily peaceful evolution of the setting established in the “Kamandi” future after the Great Disaster. Orlando sets up a discourse between the human and animal tribes here that feels as organic as it is violent. The opening scene shows Ian in a bar fight with an animal over a debate about the two race’s history, and no one around them seems to bat an eye. Yet, despite how distant this future is from present-day DC, there are still some neat connections that work well as worldbuilding elements without feeling shoehorned in for the sake of continuity. Having Jokerized fish show up as drug-like snacks called Blissfish is great, even if the dialogue detailing what they do and that they used to be toxic feels a little heavy and unnecessary. Seeing that the Trinity has left a lasting impression on the world also works considering their cosmic notoriety, and having Superman’s cape exist as the Shroud of Kal-El, acting as a heroic sigil for an Electric Warrior feels like a perfect capstone to that point, especially considering the use of his Kryptonian name.

Travel Foreman is one of the most conceptual and interesting artists to grace the big two’s pages, having previously appeared in one of Marvel’s more cosmic titles, “Ultimates 2”. His style finds a good balance of grandiose and a more kinetic, Kirby-esque style. The first panel sets us up for this perfectly, showing a closeup of a lion humanoid grabbing Ian by his collar in a fierce, Speedline-tinged movement, while juxtaposed on the other end of this page is a short detailing of how the universe narrative got from the Great Disaster to this point. We get this on a broader scale, however, when examining the worlds around Ian and Kana. Ian represents this faster, inelegant and rough-edged aesthetic, trudging bloodied through a crowded city of low hanging telephone wires and fast food vendors selling from the backs of their cars. Kana, however, represents the composed and conceptual aesthetic, hailing from an undersea setting filled with quiet spaces, connected by matrix-like light formations and highlighted by luminous figures and sigils. In a way, Foreman is reconciling the two visions of DC’s future: the tougher, grittier Kirby influenced side, and the more refined, Silver Age, “Legion of Super-Heroes” defined aesthetic.

Yet as much as Foreman’s work excels on a broader scale, there’s a lot of intimacy and emotional beats that works just as well. Every moment we witness Ian closeup, we see him fighting through an interior turmoil. He bears a sneer that reminds me a lot of Kaneda from “Akira”, with an attitude that defies authority, yet an innate feeling to try and do good in some way. There’s an even more tender moment between Ian and his brother Oscar at home when Ian expresses his feelings about Oscar becoming an Electric Warrior. The facial expression when Ian stands to hold his brother’s head shows one of anger and worry and his body language equally displays that concern, resulting in a touching moment between the two that culminates in a heartfelt embrace. Kana, however, is the opposite. Hailing from a race that displays emotions through the color of their words and skin, Foreman keeps her completely static in her home environment, creating a clever contrast between her spellbound dialogue and cold exterior. It makes sense, then, that when she reaches the surface garbed in an armor to assist her, we see more of that endearing nature coming through in her body language as she meets the animal ambassadors.

HiFi’s coloring lends a lot to the visual stylistics and worldbuilding of “Electric Warriors” #1. There’s a good mix of shading styles that makes this book feel distinct as we travel from character to character, setting to setting. When we open on the bar fight between the lion and Ian, the style is a little more painterly, using semi-hard shading to show all the detail in the characters and the world around them, with the brilliant bar lights illuminating the scene. The underwater scenes with Kana are a lot softer, however, with more use of gradient blurs to color with the environment being totally submerged and dotted by small, neon light sources. One little touch I love works with the idea that Kana’s people, the Gil’Dishpan, communicate emotion through colored words. HiFi specifically colors the word balloons to specific gradients of color to convey Kana’s emotion. When Kana says she is unsure, we get some clashing, darker purples and greens to show this uncertainty in the word balloons. It’s clever storytelling that works within this unique futuristic setting.

“Electric Warriors” #1 is a great exploration and introduction to a world never previously explored in DC continuity. Orlando uses contrasting protagonists to show a racial struggle within the greater universe, and carefully connects it to the present day DC without overdoing it. Foreman balances stylish grandeur with quicker, more kinetic inks to show a link between the two extremes of DC Comics sci-fi. It’s a corner of the publisher’s universe that feels fresher than ever, and I’m keen to explore it with the creators.

Final Score: 8.8 – “Electric Warriors” #1 is an exciting exploration of a new future for DC, with great character work and visual stylistic balance.