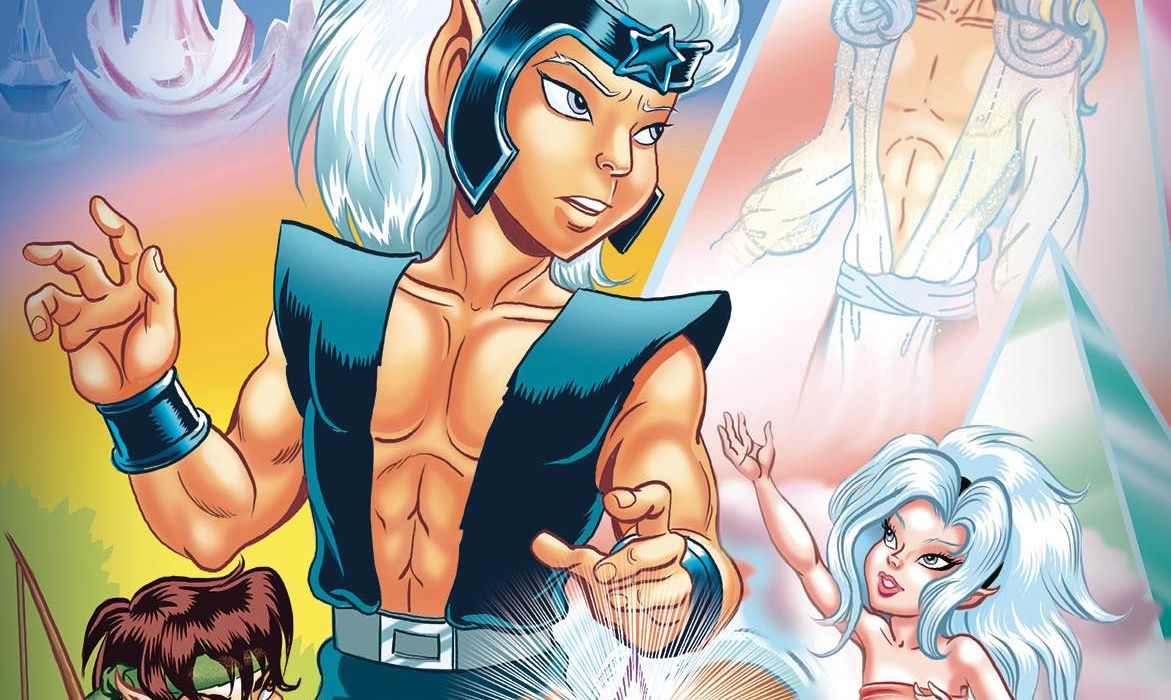 “Elfquest” has been a blank spot in my comics reading experience, which is wild considering that it’s a long-running acclaimed series that works within genres that I love. Wendy and Richard Pini closed the book on one of the character’s story last year, but now they look to continue on another character’s arc this entry in their saga, “Stargazer’s Hunt”. Let’s see how this issue fairs as a new story within the “Elfquest” universe, and if the series still feels relevant after all these years. 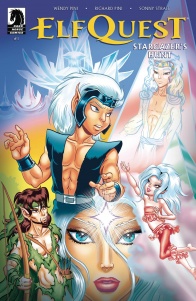 When ElfQuest: The Final Quest concluded, it ended the hero’s journey of Cutter Kinseeker, chief of the Wolfriders. But that was only the start of a new adventure for Cutter’s ”brother in all but blood,” Skywise. Now the stargazer elf, who thought he knew everything about Cutter, discovers how mistaken he was. That, combined with a tragic accident involving his daughter Jink, sends Skywise on a quest of his own, from the elves’ ancestral Star Home through uncharted space, and back to the World of Two Moons. Stargazer’s Hunt has a story by ElfQuest co-creators Wendy and Richard Pini, with a script by Wendy Pini. Veteran Elfquest alumnus Sonny Strait returns at full force as the artist and colorist for the new series. All-new material for an established character.

It’s clear from the get-go that while this story is fairly accessible, long-time fans are going to be getting the most out of this one. The lore of this world is complicated and pre-established, but jumping into the deep end on that note is honestly fun, and requires readers to focus to figure everything out. That’s because the Pini’s are no slouch at this storytelling game: they don’t directly tell you things like what ‘Jinking’ or Pods are, but everything you need to know about them is present in the story, it just takes a little more effort for newer readers. Similarly, the characters, especially the protagonist Skywise, have embarked on countless intriguing quests in the past, but the Pini’s touch on them briefly to make them feel like well-developed characters that have tonnes of experiences to rely on. My only qualm here is that there’s a lot of real-estate dedicated to re-introducing that information and the motivation behind each character. It might be interesting to know how Jink was born (and even conceived? Okay!) but it does make the opening section something of a slog to get through.

What I do love is that the Pini’s take readers through a veritable tour of their wide world and reintroduce wild, psychedelic fantasy concepts that made this comic so popular back in the day. The way that we’re guided through the comic is done in a subtle method of showing the reader around, too. The issue opens with Skywise and Jink flying through the empty sky, which already shows readers that these guys can fly with the grace of dang ballet dancers, but doesn’t show anything else to distract from that yet. Slowly, the narrative descends through the clouds, and the Pini’s start to reveal what’s happening in their world, starting with the crystal spires of Palace City, showing how each piece of architecture is adorned with thriving flora. Then we continue down even further to visit the Trolls, and although the plot point of them visiting is largely to show this section of the world to the reader and inconsequential to the grand scheme of the plot, it’s still a lot of fun because it shows off the heart of this world the Pini’s have constructed. Ending with going to the forest area is great too because it brings the series right back to its Tolkien-esque fantasy roots, showing that the series can go from bat-shit wild to traditional feeling 20th-century fantasy.

Sonny Strait handles the art here and does a great job of evoking the free-flowing, manga-esque art style the series is infamous for. This kind of simplistic, animated style allows for a lot of potential with character acting and emotional range. From the start, we get this with Skywise, who goes from being joyous about his daughter Jink to being shocked about her sudden disappearance and finally, pensive and lamenting on thinking of his former lover Timmain. The simple line work also allows for some nice subtle emotional changes due to the stripped-back nature of it. When Jink tries to psychically find out what’s bothering her father, we see he’s sad and reflective, yet in the very next panel, he looks hopeful and content with Strait merely changing the shape and angle of his mouth. Strait also does a great job showing the extremes of his emotional range with the Trolls, who vary from extremely satisfied and happy to going bananas when Jink gives the eldest of them a shock from behind.

It’s also good to note the scenery and fantasy settings in this book given its fantastical genre. Strait does a great job of having characters interact with the busy environments around them, giving the book a very lived-in and genuine feel. The Troll Caverns scene seems to do this the best. On one level, we’ve got mines that are spotted with creeping vegetation and lined with pockets of crystal, with Old Maggoty’s house having these details turned up to eleven, whilst also spotted with funky gadgets, piping, and weird creatures. On another level, the trolls are all constantly bouncing around the room, mining the gems, playing what looks like marbles on the cold stone floor, or heaving minecarts through passageways, showing Strait’s effort to make the world feel realistic. My only qualm is that the forest and Palace City don’t have this level of depth with characters running through them so uniquely, and the design of the settings feel a little generic and placeholder-ish.

Strait’s coloring here is probably my biggest issue with this book. For the most part, it’s fine and can add a lot of majestic grandeur to places like the Palace City, which sparkles with radial blurs and glistening multicolor palettes. However, most of the shading and coloring looks a little basic and feels like a product of the early 2000s. When we descend lower through the crystal city, we start to see these glistening blurred colors become a little muddier and distract a lot from the focal point of any given picture, like Skywise and Jink flying down the crystal stairs. The Troll Caverns handles coloring the best because it has a distinctly darker color palette without having to worry about glowy environments, and combines dark navies with greens well. However, in the forest scene, Strait overuses digital blurring techniques to add a sense of realism, and it takes away from a lot of the immersion the comic brought to us in previous scenes.

“Elfquest” is undeniably a classic series with tonnes of plot history to dig up and reference, and that is evident in “Stargazer’s Hunt”. The Pini’s do a good job of introducing the fantastical world and characters that inhabit it, and Strait evokes the classic, brush-heavy art style really nicely. There are some issues with re-introducing character motivations that slow down the pace, and the coloring can feel a little old-school at times, but this is still a worthy continuation of a classic series.

Final Score: 7.0 – “Elfquest: Stargazer’s Hunt” is a great series continuation for older fans and re-introduces the world nicely for newer ones.