Alexander offers up a deliciously dark fever dream of a first issue that will leave you wanting more. 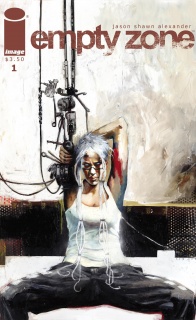 JASON SHAWN ALEXANDER returns with an ALL-NEW SERIES! In this sci-fi/horror saga, Corinne White attempts to reconcile with the ghosts of her violent past, literally, as she trudges through a world of dystopian cityscapes, reanimated corpses, & ganglands full of animal human hybrids.

2015 has been a big year for original properties. DC may be debuting a whole new universe, while Marvel are serving up unpredictable gems like “Spider-Gwen” alongside reinvigorated fan favourites like “All-New Hawkeye”, but it’s been the independents that have really turned up the heat over the past six months. We’ve seen imaginative new entries from comic-book staples like Grant Morrison (“Nameless”) and Warren Ellis (“Injection”), while lesser known creatives are putting out engaging, beautiful books like “Southern Cross”, “Rasputin”, and “They’re Not Like Us”, to name just a few. Hell, even novelists are getting into the funnybooks game, with Michael Chabon hopping onto Matt Fraction’s hugely successful “Casanova” and Chuck Palahniuk choosing the format for a sequel to Fight Club. More and more creative people are recognising the unique nature of the medium, driving it forward in new and incredible ways.

This might seem like a pretty roundabout introduction, but I just wanted to let you know how stiff I consider contemporary comic-book competition before I say that I think “Empty Zone” #1 is the best first issue I’ve read so far this year. Hands down.

That being said, Alexander did initially put out a book set in the world of “Empty Zone” during the 90’s, his first piece of paid comic-book work, but given the significant hiatus, the change of publisher, and the fact that this incarnation of “Empty Zone” requires no information from the previous mini series it’s more than stand-alone enough to be considered a whole new world.

Alexander’s offered story isn’t the most wildly original that I’ve ever come across, Corinne, the comic’s protagonist, is a mysterious loner who lives the callous, connection-free life of an ex-soldier. She is plagued by visions of an event that seems to blur the most painful parts of her past with new, unknown elements and seems destined to drink herself into oblivion. That is, until she finds herself caught in the crosshairs of an enigmatic and shady company who have plans for her that don’t include a long and peaceful retirement. It’s initial premise is one that any fan of sci-fi dystopia will be familiar with, but it’s Alexander’s execution that raises “Empty Zone” above the hundreds of carbon copies that are created every year.

the first thing that hits you with this comic is the art-work. It’s dark, layered, and full of emotion. Alexander uses shadows and negative space beautifully in the early pages to get across Corinne’s complete disconnection from the rest of the world in swift, concise brush strokes. Rather than high-chrome ultra-modernism or heavily detailed dystopianism, Corinne’s world is more fluid, amorphous, and feels far more indicative of her own, hazy mental state than any concrete architecture. The first half of the comic-book is all but devoid of internal monologue and yet it feels as though everything visual, from Corinne’s low-key, vulnerable facial expressions to the walls and ceilings of her oppressive tenement building apartment, feel as though they’re part of her damaged psyche.

In fact, the union of Corinne’s mind and her surroundings becomes so complete that, during the middle portion of the comic, there is a sequence that flows so smoothly between visions and reality that you’ll struggle to pinpoint the moment it switches. Here Alexander’s art takes on more of a classical flourish. His tender representation of the human body blends carnality with fragility in a way that feels more like a painting by Goya than a panel from a comic and, when the moment of closeness is interrupted you truly feel Corinne’s visceral reaction, perfectly encapsulated by the subtle switch in tone.

While the CliffNotes version of the story may not seem ground breaking, Alexander manages to inject a sense of originality into well-worn archetypes. What’s more, there’s an element of playfulness, a lightness of touch and a realness that makes Corinne’s interactions feel like they have a history to them. Whether it’s the terseness of her usual conversation with ‘Eight’ the bounty hunter or the tender, more humanised conversations with her best friend ‘Hank’ and their bartender buddy Tim, there are clear levels to the protagonist of  “Empty Zone” that spread far beyond the standard grizzled super-soldier trope.

The real world-building story progression doesn’t kick in until the final few pages but when they do Alexander raises the stakes of “Empty Zone” with a sense of true precision. He’s stated in a number of interviews that he’s looking to blend the, usually disparate, worlds sci-fi and the supernatural and I’d say he’s very successful in this respect. That being said, I think that, in highlighting those two elements he’s underselling the horror element that sits at the core of this first issue. There’s a real sense of creeping, gothic fear that plays at the corners of the narrative, only truly rearing its head in the closing pages with presentation that would curl even the toes of “30 Days of Night” artist Ben Templesmith.

I would urge anyone who is a fan of high concept sci-fi to pick this up and, for those of you not usually into that kind of thing, this is the comic to take a chance on, there’s so much more to it than meets the eye.

Final Verdict: 9.3 – A gripping first issue that shows that it’s how you tell the story that makes all the difference. Pretty much perfect.