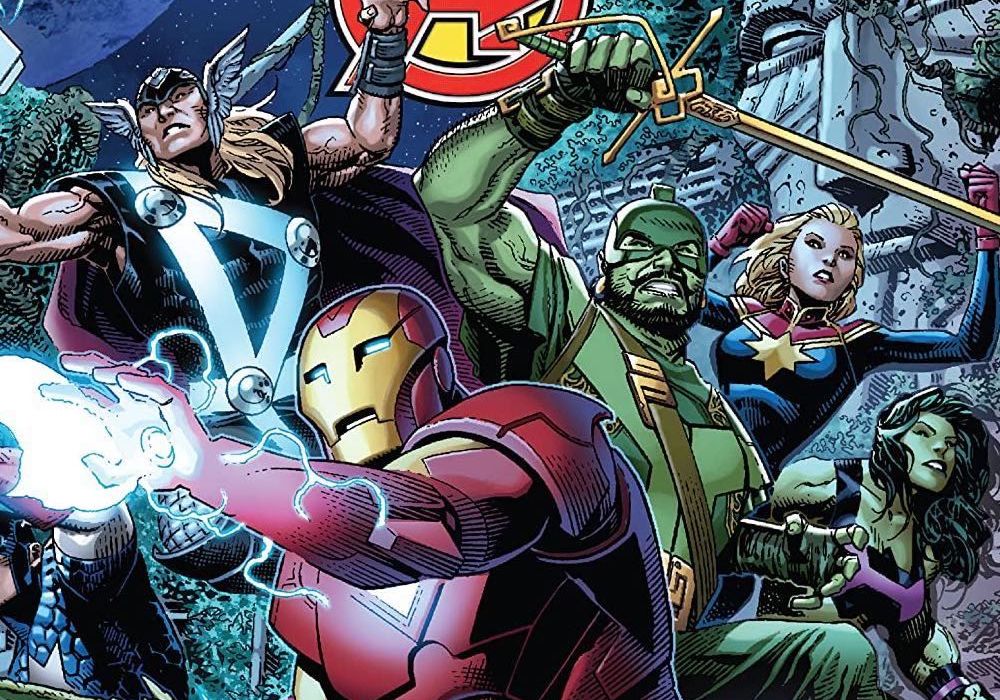 Marvel Comics initially solicited the first issues of the “Empyre” event for the first day of April. Over two months after the original solicitation date, The House of Ideas is finally ready to give us the comic we anticipated for months. With the extra hype and anticipation will Marvel be able to deliver on “Empyre”? The publisher is combining the Kree and Skrull for an offensive pitched directly against Marvel’s premiere superhero team, The Avengers. Superstar “Immortal Hulk” writer Al Ewing is joined by acclaimed “House of X” artist Pepe Larraz for the debut of a brand new event comic book! Can Marvel possibly live up to the immense hype and usher in the return of comics? Join us for a review of “Empyre #0: Avengers” to find out! 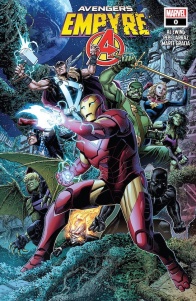 Tony Stark wakes from strange dreams ? as old allies make a distress call to the Avengers. In the new Green Area of the Moon, the Cotati are waiting with news of a terrible enemy that could wipe out both them and humanity itself. The Celestial Messiah has returned… but are the Avengers ready to hear his message?

There’s a lot of baggage in Marvel when it comes to the intergalactic Kree and Skrull threats. Author Al Ewing efficiently catches readers up to the current events of these races to bridge them into the publisher’s latest event. However, “Empyre #0: Avengers” crumbles in the scope of its own ambition. The comic book reads as a pure exposition dump recapping countless Avengers stories to get readers ready for the landmark event. It is disheartening to see writer Al Ewing establish the setting for where the event is placed and then proceed to recap everything readers are supposed to know about the alien races.

While getting an in-depth recap of the issue and seeing a couple more plot developments take shape was interesting, Ewing devotes too much of the script towards setting each player in the right place. The issue even packs a couple of plot reveals but has to take a significant portion of time to explain why they matter. The most popular Kree and Skrull stories are decades old and this event is riffing directly on those comics. Marvel aficionados and devoted Avengers fans are going to enjoy the deep callbacks to history that Ewing pulls from in this issue. New readers are no doubt going to be worried by the huge layers of exposition and subpar characterization here. I wish Ewing could strike a better balance between riffing on old Avengers stories and threading new ones.

Artist Pepe Larraz delivers a good set of pencils to this issue. Larraz’s pencils carry a lack of expression that I felt titles like “House of X” captured stronger. I really enjoy how Larraz delivers a set of pencils that recall some of the best Avengers artists like Jack Kirby. There are huge purple and green adversaries as well as new designs for Kirby creations like the Skrulls. The issue features a couple of really great layouts and sleek colors from Marte Gracia. When Ewing starts delivering history lessons to readers, Larraz lays out each page to take advantage of the script. The recap of Swordsman features Jacques Duquesne in three different costumes on one-page emphasizing three different incarnations of his sword.

Towards the end of the issue, Ewing does a great job starting to build the plot momentum until a cookie-cutter speech from Iron Man ‘uniting’ the Avengers bridges the script back into cliches. Instead of saying something new about Iron Man, Thor, Black Panther or Captain Marvel Ewing repeats the status quos and basic personality traits of the character. In fact, Ewing’s happy-go-lucky approach to Thor even deflates the characterization of the hero portrayed in his current solo title. I don’t need all the continuity to line up across each book Marvel is publishing, I just need to see something interesting beyond plot mechanics.

Going back to a previous point, it just can’t be overstated how many cliches Ewing throws at founding Avengers. Having Captain America throw praise at a job well done is so retro that it becomes derivative. Ewing’s script lays out so many plot threads and establishes so many relationships that there is little room for anything interesting to take place in between these panels. I’m optimistic that this issue isn’t going to be a sign of things to come based on Ewing’s track record of telling interesting stories with Marvel characters in other books. However, Marvel’s editorial needs to place a more concerted effort into avoiding simple recaps of characters that are familiar to Marvel fans across several mediums. I wish Ewing would have used these pages to dive deeper into the Avengers mythos with the dialogue.

Pepe Larraz delivers a solid set of pencils that aren’t among his best but still manage to be incredibly kinetic and sleek. Despite a lackluster debut, I’m going to hold out hope that Marvel hits the gas pedal when “Empyre”‘s proper debut issue launches next month. I’m also crossing my fingers that the dull characterization in the issue isn’t a sign of things to come for Marvel Comics.

Final Verdict: 5.3 – “Empyre #0: Avengers” loses sight of being a good comic in order to give readers an in-depth recap of key “Avengers” stories.