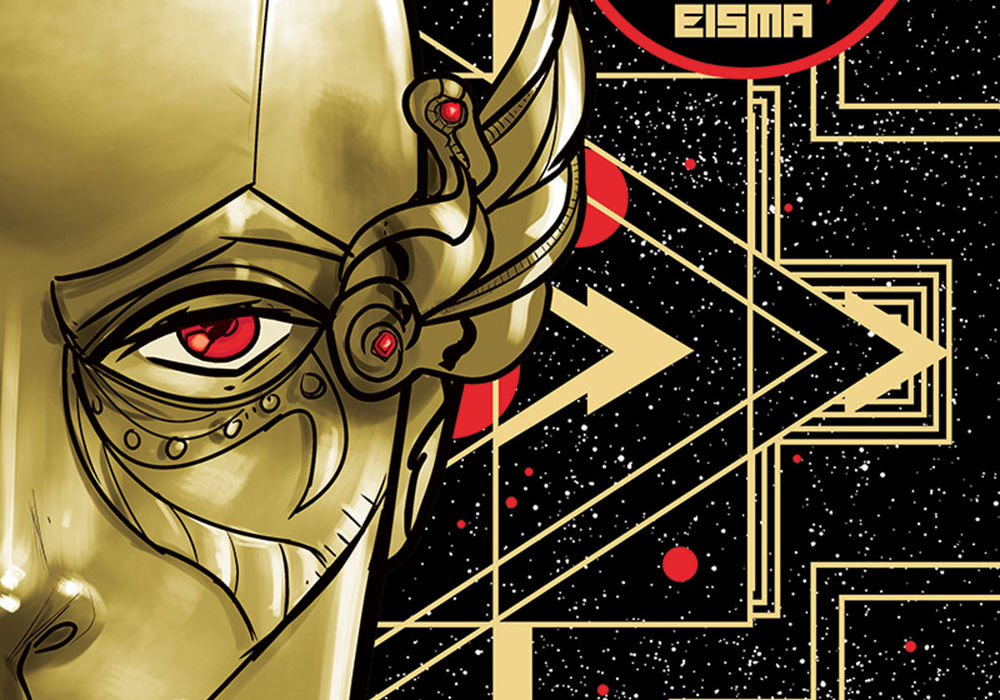 Slated as a 12-issue series, “Engineward” #1 is a well-balanced debut, laying out the central themes, characters and plot points, while also leaving space for plenty of mystery and intrigue. (Warning: may contain minor spoilers.) 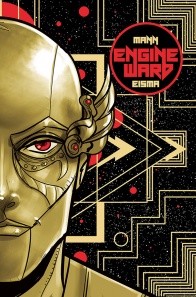 Earth is an ancient myth, long forgotten. Now, the word of the god-like Celestials is absolute, and they rule with brutal efficiency. When Joss, an Engineward, discovers and reactivates the head of an ancient ghoulem, she finds all is not as intended. Her destiny––and that of her world––lies somewhere far beyond the borders of her shantytown.

Joe Eisma’s symmetrical, wraparound A-cover for “Engineward” #1 is the kind of high concept piece that can stop you in your tracks. It’s not only one of the best covers of the year, with its tightly constrained color palette of gold, black and red and a similarly constricted Art Deco geometry, it also somehow strikes the balance between minimalist elegance and artistic overindulgence. It’s lush, evocative, gorgeous and far more mysterious than it might seem at first. On one level it feels simple and straightforward. It’s easy to digest. Not hard to comprehend…. The longer you look at it, though, the more you start to notice all the little details and subtle flourishes—arcs and dots and angles that echo and repeat, interacting and intertwining in ways that take time to absorb. Is it a circuit board? A star map? Just a simple, geometric design?

Intentional or not, it’s also an apt metaphor for the story within, blending familiar tropes and recognizable elements, but combining them in ways that are deeper and more nuanced the longer you stick with them.

In fact, in a lot of ways, the visual aesthetic is more reminiscent of high fantasy than it is Golden Age sci-fi or some sort of future-retro Victorian space opera, as the book’s cover and overall design might imply. Certainly, there’s the requisite angsty robot and huge pieces of spacecraft debris poking up from the barren sand, but there’s also a standard cross bow, plenty of capes and tunics, and a large dragon-like beast that chomps the crap out of Jarvix before we hit page five. (Pretty sure that’s not a spoiler. Apologies if somehow it is.)

In short, the general setup pretty much feels like a standard “backwater desert planet” where large reptilian beasts of burden carry scavenged pieces of wreckage—along with mysterious, vaguely comprehensible high tech components—to be sold, bartered or gifted to self-taught mechanics who are desperately trying to keep the machinery running.

Even so, despite the decidedly blatant post-Star Wars influences, Eisma does a great job keeping things fresh and dynamic. As always, his paneling is top notch, with an excellent balance between bold, uncluttered compositions and a decent level of detail. In the particularly dialogue-heavy middle pages, things start to feel a bit cluttered, but once the “celestials” are introduced, things start popping again.

Rounding out the rest of the art team, Michael Garland delivers great colors, from the muted rusty reds and pale yellows of the parched exterior to the sumptuous aquas and turquoise blues of the decadent bath house, while Hassan Otsmane-Elhaou over-delivers on letters. For starters, he does a great job intuitively differentiating character dialogue from narration, while adding occasional color to give certain words and phrases extra punch. On top of that, his sound effects become an actual part of the scene, taking things to the next level without going overboard.

Narratively, there are two crucial differences—so far, anyway—between this story and a dozen other interstellar epics. The first is the notion of earth as a chronologically—and perhaps spatially—distant, mythical world, remembered only vaguely through legend and folkloric tradition. The other is the vast economic and social gulf between the god-like ruling class and their subservient underlings.

Writer George Mann, who’s probably better known as a novelist, but has also scripted comics for Dr. Who and Warhammer 40,000, delivers brilliantly on both points. Illustrating the subtle, yet nonetheless meaningful transformation of quotable, “common knowledge” over time, the titular engineward Joss says, “There are more things in the stars and the soil, than are dreamt of by the sleepers.” It’s a mangled version Shakespeare, from Act 1, Scene 5 of “Hamlet,” when Hamlet himself says to his fellow student Horatio, “There are more things in heaven and earth, Horatio/Than are dreamt of in your philosophy.” It’s a brilliant bit of writing that packs a lot of subtext into a compact space, not only exemplifying the tenuous connection between the villagers and distant Oert, but eerily foreshadowing “the sleepers” as well.

Similarly, Mann shows us the huge disparity in wealth and status between the celestials and the common villagers by having Armuth bemoan the villagers’ demand for more water. “More?” he asks indignantly, “Don’t they realize how limited our resources are? How scarce it is? I don’t even fill my second bath house any more.” Much of the imagery feels Greek or Roman inspired, but it’s a comment that also feels a bit too familiar in the current global context.

In the end, if there’s one knock so far, it’s the characters. Undoubtedly, we get a taste of what each one’s about, but at this point, it’s only that. There’s not much that feels very special, unique or compelling. The plot may be enough to carry the book for 12 issues, but stronger characters will make it something special.

Final Verdict: 8.2 “Engineward” #1 is a solid debut. The story is unique and intriguing, with artwork to match. Keep your eye on this series.