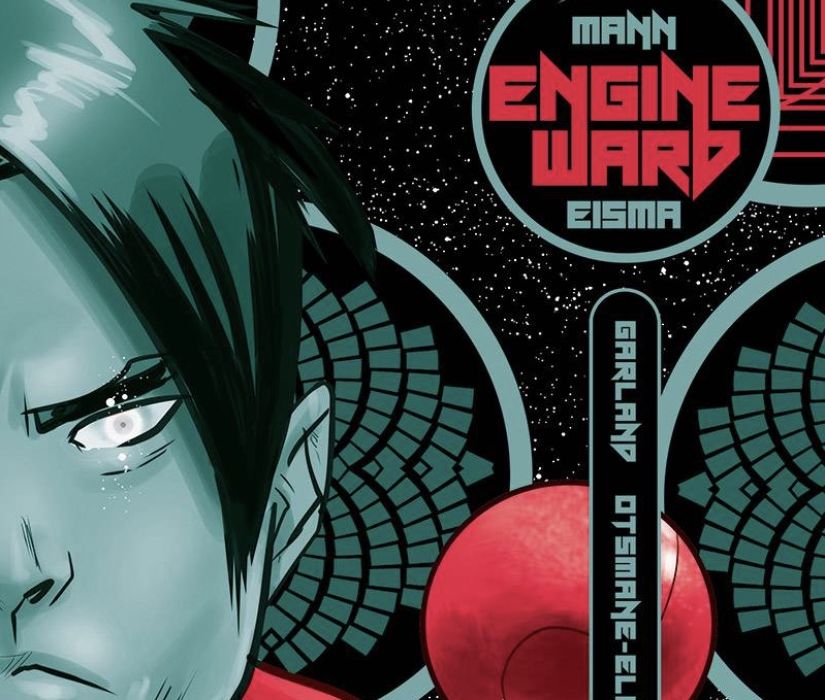 “Engineward” #4 sees Joss and the crew in a bit of hot water with an atom-worshiping cult, while Gemini and Libra pick up the group’s trail. Warning: spoilers ahead. 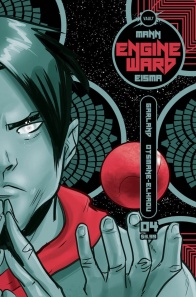 Cover by Joe Eisma
Written by George Mann
Illustrated by Joe Eisma
Colored by Michael Garland
Lettered by Hassan Otsmane-Elhaou As the Celestials discover the truth about the Terran seed, Libra tries to tip the balance in their favour, and a betrayal in Shiptown puts Gemini on Joss’s trail. Meanwhile, held prisoner in the Atomists’ camp, the ghoulem’s head helps Joss plot an explosive escape-but even success means facing her deepest fears: the shades.

“Engineward” #4 continues an intriguing, futuristic look at a civilization so detached from our current reality they’ve gotten more than a few things wrong. Not the least of which are the mysterious Celestials, whose zodiac-inspired names and personae evoke the last emperors of Rome more than their constellation counterparts.

Mann’s scripting is good, with believable, flowing dialogue and enough emotion present for each character that the story feels deep enough to generate interest, but not so melodramatic as to puncture all the mystery at once. Joss is something of a box-standard female protagonist in the current comics sphere – complete with the ever-present side shave – but her curiosity and good heart lend her some depth. The cult featured in this issue are a weird mash-up of sci-fi serial villains and the Children of the Atom from the Fallout universe, but they’re a believable mid-desert threat to the expedition. The transition from the camp to the mysterious thicket is a bit jarring, but the final page promises some interesting revelations in the next issue. The constant threat of the Celestials on the band’s tail propels this issue at a good pace, too. The main drawback of “Engineward” is the meta-narration, however.  The mythic style of the writing doesn’t track well, spread out as it is over multiple pages, and multiple issues. It needs truncation, both in each narration box and in its overall length. Dialing that back wouldn’t detract from the world-building thus far.

Eisma’s art is interesting, with a lot of thought put into character design, intricate facial expressions and economy of detail. Kreek’s design in particular is evocative of his burgeoning personality, and Artemis’s bland, out-of-the-box A.I. head carries a sinister edge with its glowing eyes and dismembered calm. Eisma favors a thick outline on some characters – generally against light backgrounds like the blasted desert – and puts a lot of work into fine facial details in some medium and wide panels where they can otherwise break down. There’s a bit of blur at times, but the effort matters. Joss’s personality comes through in her wide eyes, grimaces and determined jawline, and Ichabod’s hulking self and mysterious illness take up good space on the page. Eisma goes clean for the Celestials, but the contrast doesn’t always work. Instead of marveling at the intricacy there, it’s easy to wonder if a cleaned-up line wouldn’t serve the book a bit better and make for a more cohesive aesthetic. Still, “Engineward” has its own careful style. The world feels alive thanks to Eisma’s work, and there are a few nice layouts that flirt with form in issue #4.

Garland picks some sand-blasted hues for the desert scenes that work well, with bright pops of color on the cultists’s uniforms. The thicket is a tangle of moody purples and darker hues that shifts on a gradient from blue in the top left corner of the spread to orange and yellow in the bottom right. The Celestials are blessed with a broad palette, and Libra’s Mister Miracle-esque green and red costume generates some interest. Garland’s work on the Libra splash, particularly in the detail in each sphere, helps the scene’s clarity and demonstrates how to balance a difficult concept in execution.

Otsmane-Elhaou adds flair to the book, but there are too many touches to really make a cohesive whole. We don’t flirt with different font sizes like we did in issue #2, thankfully, but the left-leaning dialogue font is a bit too scratchy to suit Garland’s line, and the Celestials’s dialogue font is too uniform and neat. The intention behind each is to pick out and enhance the aesthetic for each kind of character, but a subtler take would suit better. Similarly, Otsmane-Elhaou’s efforts to add emphasis with color in the dialogue is interesting, but shouldn’t be echoed in the balloons. The text can carry the emphasis just fine, and limiting it to a few colors would also aid cohesion. Adding color to the balloons and tails highlights the artificiality of the medium in which we’re reading – “Engineward” is an immersive sci-fi future, and no one’s aware that they’re in a story. We’re on the right track with the effort, but the result is style over substance and the lettering does not blend like it should. The sound effects, on the other hand, are melodramatic and big in the right way – even if the “Snickt!” at the end is, again, a meta reference that shouldn’t be.

Overall, “Engineward” #4 is a solid entry into the story thus far. Mann, Eisma, Garland and Otsmane-Elhaou are putting in good work to make an enjoyable comics experience, and the story is blessedly expansive without sinking too far into cynicism and despair. We’ve still got some hope that Joss and her friends can find the Seed and save everyone, and there’s enough left to explain that the book has some runway before it.