The consequence of battle, the loneliness of leadership, and all that war leaves behind. Read on for our review of “Eternal: A Shieldmaiden Ghost Story,” which contains minor spoilers. 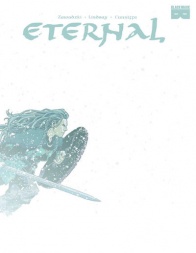 A group of isolated shieldmaidens protect their village against a tide of men who think they can take their land land from them. Vif takes her band of women off viking to quell the advances of a loitering mystical scumbag, Bjarte. But some battles rage on inside us long after the field is empty, and some opponents won’t ever stay down. Eternal is a haunting story of how vulnerable you make yourself when trying to protect everything around you. This oversized bande dessinee graphic novella is a love letter to brutal violence and eternal emotions. With hyper-detailed art and gorgeous fluid motion from artist Eric Zawadzki [hot off THE DREGS], this story will be one of the most beautiful and heartbreaking things you will read this year. Written by Ryan K Lindsay, known for marrying emotion to genre in BEAUTIFUL CANVAS and the award winning NEGATIVE SPACE, this self-contained story is aimed to be a boutique item for your shelves, and a gateway gift to others you know and love.

Like any good ghost story, timing is everything. There’s so much more to “Eternal” than being just another ghost story but the extra space afforded this tale allows for the tone to be set through the pace of the narrative, and the extended page count gives the feeling of loneliness, desolation, and despair that a good ghost story needs.

“Eternal: a Shieldmaiden Ghost Story” tells the tale of Vif, an eponymous shieldmaiden who, along with her sisters and fellow women of the village of Hvallatr have been left alone as the men have all gone to fight in an unspoken war. A village full of women is seen as fair game by those around them, forging within the shieldmaidens a fire for battle as they alone stand to defend their village. As such, they take their fight to Bjarte, a local tribal leader and dark mage who’s been sending waves of marauders to Hvallatr, and it’s in him that the ghostly portion of this tale comes into focus.

“When you play with magic, you come across problems. When you murder magic, you create problems.” Such is the case with Vif, who becomes plagued with ghosts who are very much of her own making, in more ways than one. It’s through Vif that we explore this world of hyper-violence and eternal solitude. She’s a powerful character to craft a story around: a natural leader in an unnatural world, albeit one cursed with the burden of responsibility, both over her village and over a young ward who’s destined to lead one day.

“Eternal” is written by Ryan K Lindsay, but there’s a reason this book credits both him and Eric Zawadzki with producing the story, as so much is told in the art. The tone, the pacing and the emotional beats are all there in the linework, and it’s to Black Mask’s credit that their flexibility allows for a book like this to avoid the restrictions of a standard issue length. The book doesn’t waste a panel, and Zawadzki uses the extra room to breathe in multiple ways. Firstly, the pace isn’t slow, but certainly more thoughtful, more contemplative, as Lindsay’s narrative explores the consequences of war and its effects on Vif’s psyche. Secondly, Zawadzki pushes composition in a way that feels unique to every page (something he carries through all of his work), using repetition in places to drive home the power of movement, or being unafraid of opening up to a full bleed page to really explore a single moment.

Thirdly, Zawadzki layers panels in a nuanced, masterful way. There are panels early on that are framed in a celtic-like braid, which forms an association in your head that is brought back later on to add an extra dimension to a heartbreaking moment. There’s also a page denoting the passage of time: four wide panels intersected down the right hand side by three vertical frames, showing the effect of the various seasons on a single, symbolic sword.

Throughout “Eternal,” we’re presented with a blood-soaked page of Vif in violent battle, the time frame of which isn’t immediately evident. The extra room afforded to “Eternal” really comes into its own here, as Zawadzki uses four wide panels to craft moments of this battle in a startlingly real way. The choreography on display only enhances that reality, as these aren’t separate images of war but rather a fast-flowing, second-by-second moment from a raging conflict.

It’s on these pages that you’re reminded too just how good Dee Cunniffe is. His coloring throughout “Eternal” is rich and bold and intense. There’s a bleakness to the landscape that’s captured in Cunniffe’s pallete, as is the loneliness felt by Vif and her clan, which is reflected in the cold, muted tones. A scene imbued with magic is enhanced by an unnatural twilight hue, and those battle pages that intersect the narrative are drowned in blood-red.

“Eternal” is a truly exceptional viking tale of isolation, desperation, ghosts and the consequences of battle. Lindsay’s minimal script allows Zawadzki’s detailed, graphic and indulgent art to shine. This is a gorgeous book deserving of a prestige format, with a story that feels iconic and universal. The themes of responsibility, the burden of being left behind and the terror of being alone all touch on core human emotions in a way that capture the imagination.“Eternal” is a must-read viking tale of war, and a great ghost story to boot.