“Eternal Empire” has been a great fantasy study by the creative team of Sarah Vaughn and Jonathan Luna. The two have crafted a carefully thought out world with interestingly naive and human characters, but one that looks to be coming to a conclusion this week. Let’s see how they stick the landing. 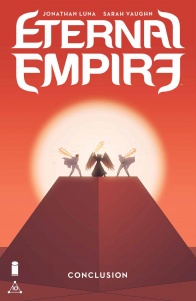 Series conclusion. Tair, Rion, and the Empress decide the fate of Saia in their final battle.

One problem that I always had with this series prior to this was that Vaughn’s protagonists always seemed uncertain in their actions and motivations. This is not the case here. Right off the bat, we see Tair and Rion aggravated by the deaths of their dragons beyond words, moving straight to the fight. There’s no dialogue: it’s simply fierce and straight to the point enraptures the readers with its unabashed confidence. Vaughn has progressed in her writing to be able to deliver a cinematic, movingly-scripted action piece. It’s deconstructed in the best way, feeling emotionally heavy and slow-moving to make scenes like the dismembering of Tair and Rion’s hands appropriately dramatic.

Vaughn then takes it a step further than most action movies and texts might, by having the protagonists and a second party consider ‘fixing’ the empire in a post-Empress world. It’s at first something of a system shock for readers. Coming off almost no dialogue to panels taut with speech bubbles brings the pace right down, and might be a bit of a turn off initially, but Vaughn laces the dialogue with interesting ethical ideas about the corruption of power and freedom to keep readers interested. Vaughn masterfully ensures that it doesn’t stay long enough to become weary and boring for readers, moving on after roughly five pages of ethical discussion to a well-deserved freedom for the protagonists. The dialogue is stripped back again giving a more emotional power to the scene when Tair and Rion choose a more emotional and freeing fate than those presented to them.

I will say that I thought the turning point of the action narrative was a little abrupt. Vaughn held back a lot of dialogue to give a more visual narrative in her script at this point. As the black dragon arrived injured and hurt, we didn’t need dozens of speech bubbles to exemplify that the Empress saw this as a symbol for the pain she inflicted on her own empire. It was superbly crafted storytelling at its finest. However, to have the protagonists immediately vaporize her, after this strikingly moving emotional change was alarming. The characters even acknowledged it later on in the script, saying “I can’t stop thinking about the look on the Empress’ face… how gentle she seemed… Right before we killed her”. It’s never properly justified and feels like a big thread to leave hanging at a series end.

Jonathan Luna has honed his art style to a fine point over his career but never has it looked so good as it does here. The opening scene has its success due largely to Luna’s efforts. I’ve found that early on in this series, like Vaughn’s scripting, Luna was trying to find the balance between rendering fluid action and solid emotional figures, but the action here is as fluid as it gets. The fire sword dueling is as tightly choreographed as some of the best Star Wars duels, with weighty sword-play and blows that make the victims genuinely flinch. Something outside of the fights that intrigued me was how Luna made the Empress’ dragon look truly injured and weary. Every time it lifted off into the air, it was stiff and awkward, looking even more exaggerated when it crashed. It added to a lot of the emotional weight in the key turning point of the issue and only worked through Luna’s art style.

One thing I’ve found lackluster about this series is that having a desert/apocalyptic-type environment didn’t give Luna the opportunity to wow readers with fantastical settings. However, the sparse environment works well as a backdrop for the final emotional scene. It brings a lot of attention to the focal point, the protagonists fighting with the Empress, while still providing a slick and bold ziggurat-style arena. I love that when the scene is over, however, that we do get to see Luna render a few shots of the different biospheres of the “Eternal Empire” world. It does feel a little too short of a glimpse, and I would love to see more, but just the fact that we get to shift to an oasis-style setting afterward is still rewarding.

Luna’s coloring has some serious confidence that gives this a truly big budget high-fantasy tone. The colors blend hard cel-shading that dance just on the edge of video game-ish without stepping too far, and soft, warm gradients throughout the palette to accentuate the grandeur of the series. I love the use of the suns throughout the series, and the sun as the centerpiece of the cinematic opening fight highlights the whole scene beautifully. I love that the whole fight has the sun setting on the scene too, which we get both literally in the background and as a soft darkening of the palette in the scenes. It symbolizes a setting of an old era before we get the dawn of a new day post-Empress in the latter half of the issue, and coloring is a big part of portraying this. The use of gold highlighting in the dragon’s fire is always super pretty as well and has given the series an unabashed beauty from day one.

Vaughn and Luna’s “Eternal Empire” manages to deliver a satisfying conclusion that could very well be the best issue in the series as a whole. Vaughn holds back just enough on the script at times to bring grandeur and big emotion to the scenes, and Luna brings his unique style like never before, delivering fluid fight scenes and beautiful environments. This will surely be a run to remember.

Final Score: 8.2 – “Eternal Empire” #10 concludes the series in a bombastic and spectacular way, not only deliver a cinematic conclusion, but one with clever ethical discussions too.