The team behind Alex + Ada return with a new ongoing series, this time tackling high fantasy and one hundred years of war. Read on for our spoiler free advance review 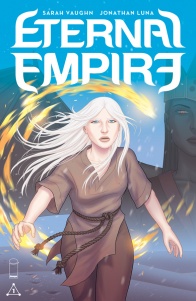 Written by Jonathan Luna, Sarah Vaughn
Illustrated by Jonathan Luna
JONATHAN LUNA (ALEX + ADA, THE SWORD, Spider-Woman: Origin) and SARAH VAUGHN (ALEX + ADA, Deadman: Dark Mansion of Forbidden Love, Ruined) return with ETERNAL EMPIRE, a fantasy epic! The Eternal Empress has waged war against the countries of Saia for over one hundred years and now her sights are set on the last country standing. Within the brutal Empire’s workforce, a young woman receives strange visions that give her the courage to escape her fate…or run straight toward it.

There’s something extremely satisfying about “Eternal Empire”. It could be the fact that “Alex + Ada” was consistently one of the best series coming out and it feels great to get a new series from the creative team. It could be that this opening issue feels like the start of something big, and the opportunity to dive into a brand new saga is always exciting. It could simply be that this is a strong debut issue.

It’s not unfair to say that “Eternal Empire” #1 is almost entirely setting up a grander story, but when a series is attempting something as potentially epic as this, that can be forgiven. After all, there’s a lot to set up; a brand new fantasy realm with various regions to explore (including a handy map); a centuries spanning war that threatens the entire world; new characters with their own lives and secrets. It’s difficult to not compare any new fantasy to the behemoth that is Game of Thrones, and while there are similarities in terms of scope, it’s clear that Vaughn and Luna are forging their own path using traditional fantasy as a jumping off point into something entirely their own.

“Eternal Empire” is a significant departure from “Alex + Ada”, but there are already hints at connecting threads. Both series focus on central characters trapped in a system that they yearn to be free from, here it’s an unnamed worker forced into the service of the Eternal Empress, receiving visions of a life beyond her own. There is only a very slight hint of this in the issue itself, but the connecting covers released by Image Comics for issues 1 and 2 lead to the idea of two central characters, both covering unique aspects of the central conflict, coming together to combat the unfairness imposed upon them – another link to Luna and Vaughn’s previous work.

There’s enough information given to the reader to understand the motivations of the protagonist – the nature of her servitude makes it obviously why she longs to escape – however there’s not much revealed about the character herself. It’s a deliberate choice at this stage to internalise a lot of her decision making, her only real dialogue being about the visions she receives, yet that leaves us with an individual we know next to nothing about. That’s potentially the point: not only will that be revealed as the series progresses, but maybe her struggle is an internal one, finding herself as she goes, the reader learning her limits only when she surpasses them.

Adding to that feeling of satisfaction is Luna’s art. Uniquely familiar to fans of his work, Luna’s clean lines, widescreen panels and deliberately paced structure are instantly recognisable. There’s no denying that the almost sterile nature of both the linework and colors were more suited to the subject matter of “Alex + Ada,” Luna’s work here, however, adds a cinematic feeling to “Eternal Empire” that is necessary for a story this big. There’s not a sense of any boundaries being pushed, but the nature of fantasy also allows Luna to explore more outrageous concepts and visuals, so here’s hoping he’s able to rise to the challenge. In this issue specifically however, the focus is tighter and drawn closely around the central protagonist and the start of her journey.

The familiar pacing is very welcome, and demonstrates a deceptively complex skill that Vaughn and Luna share, and something lost on a lot of creators. There’s a play with panel structure that allows, for example, a dramatic moment in the first scene to be realised with a full page panel, to a twenty panel grid to emulate a sense of disorientation when a character gets lost in a snow storm. There’s never a break from the sanctity of the panel borders, yet Luna is still in control of how you read them. This is primarily a tale of a character’s struggle both physically and emotionally, all with a heaping serving of world building that’s all introduced to the reader naturally, so managing to deftly pace both of these things in a quiet way that moves swiftly but never feels rushed, that’s a real achievement.

There’s definitely a sense that the best is yet to come, and “Eternal Empire” #1 is merely the first chapter in what promises to be a new and intriguing fantasy saga. It’s encouraging to find Vaughn and Luna exploring a narrative so different to their previous work, however it’ll be satisfying to continue to draw parallels as they build a body of work together. Fans of “Alex + Ada” will find a lot to love here, but fantasy lovers should take note; while the art style may not feel conventional for the genre, there’s no denying that the groundwork is being laid for something deserving of the word epic.

Final Verdict: 8.0 – A strong debut with a slow build. The best may be ahead, but here is where it all starts.