“Eternity Girl” is the first series to launch under the ‘Young Animals’ line after the conclusion of the ‘Milk Wars’ crossover. Editorially, all series under the publishing line promise an even stranger set of concepts, characters, and situations. But does the introduction of Caroline Sharp truly stand out or is it a rehash of past reinventions of the superhero genre? 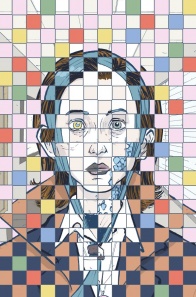 Caroline Sharp has been a lot of things, including both a superhero and a super-spy. But now, with those days behind her and her powers proving unreliable, Caroline finds herself stuck in a life weighed down by her depression and an inability to change. You see, Caroline is going to live forever, and there is no escape to be had. The very act of living reminds her that, to the rest of existence, she is an anomaly.

The deconstruction of the superhero mythos has been a long-standing tradition on its own over the past decades, ever since series and graphic novels started to tackle the negative side of super powers, their impacts on society, and on the mental health of ordinary humans turned extraordinary. To dip its feet on this pool is to enter the fray of acclaimed artists like Moore, Morrison, and Gaiman, which is certainly no easy feat. And it is because of this condition the initial issue by Magdalene Visaggio and Sonny Liew is such a welcomed addition to the roster.

First of all, the artistic choices presented on this debut issue are exactly what a series like this needs. For a story that will address the emotional balance of the day-to-day life for an incredible being, drawings and style need to be able to convey the mundane just as effectively as the larger-than-life. Liew’s pages are mostly traditional, almost adhering to a nine-grid layout, with very few experimental designs. That is certainly a smart choice, as readers are pulled in by the familiarity of the story, by observing a woman visit her friends, therapists, and attempting to return to work after a traumatic experience. These are all situations readers can be familiar with and facial expressions, movement lines, and coloring (more on this later) all come together to ease the audience into the book.

With that canvas properly established, when Liew does bring the extraordinary in, he really makes it shine. Eternity Girl’s power signatures are filled to the brim with Kirby influences, from crackling energy to heroes deformities to massive destruction when battles are unleashed. The contrast is made even stronger on some pages toward the end of the issue, where normal and supernatural are separated by a single line of panel border, with such a strong juxtaposition of styles it almost feels like taking two pages for the price of one. Really well-crafted and surely additive to the story flow.

Over at colors, Chuckry seems very much aligned with Liew, in the sense his pallet changes according to the mood of each particular sequence. Some moments of Caroline’s past are conveyed in a decidedly faded scheme, feeling like a worn-out comic book with years of handling. As an opposite to that, the situations told in the present have a more digital feel to them, with color nuances that were not available in early days of comic printing, adding to the contrast. And both effects seem to gel when Eternity Girl presents her powers in present time: classic-style drawings wrapped in more modern colouring techniques.

Visaggio’s plot is provocative. What truly happens to an individual´s mind and personality when they realize they cannot die? How can choices be framed after that realization? And is that even a desirable life condition, or something of a curse? Fans of classic Gaiman comics will quickly establish a connection between Eternity Girl and Element Girl, on the acclaimed “Sandman” #20, ‘Façade.’ There, Gaiman explored the mental distraught of Urania Blackwell through the lenses of abandonment and purposeless. Here, Visaggio leverages on a similar power set and immortal condition, but makes Carline Sharp far more active in how she wants to solve her condition, even if by means readers might object to. While the inspiration across both stories is clear, “Eternity Girl” is able to step out of some very large shadows and tell a compelling story of its own.

It is not entirely without is faults, though. Towards the end, the script calls for readers to understand that Caroline is experiencing reality in two layers of existence (one of them playing the “is this real?” trope): while the intention is commendable, it is done a bit too abruptly and it will require multiple readings to understand its full meaning. This can be potentially better explored over subsequent issues, but it leaves the debut issue in a bit of a jumbled ending.

Final Verdict 7.9 – Surely a strong series out of the gate, “Eternity Girl” presents characters readers can quickly care for, in situations that introduce complex questions on the nature of super-heroism and its impact on ordinary people. And while some script choices could be further ironed-out, it certainly makes for a series well-worth revisiting in future issues.