James Tynion IV and Eryk Donovan’s Apocalyptic Trilogy has been nothing short of terrifying so far, and now the pair plan to wrap it all up in the climactic “Eugenic.” It claims to have scares in the vein of sci-fi futurism and Black Mirror. Pray for me that I make it all the way through this review. 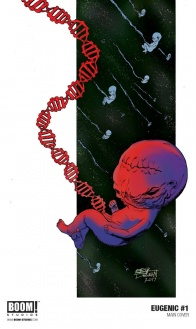 From the GLAAD Award-nominated team James Tynion IV (Dark Nights: The Casting, Detective Comics) and Eryk Donovan (Constantine: The Hellblazer) comes a new vision of humanity’s future in the vein of Black Mirror.
When a plague ravages the world, one scientist discovers the cure and becomes the savior of mankind. Hope is restored, and the world rebuilds. But then people who took the cure begin having children who are… unnatural, and the definition of “normal” is forever altered.

Oh man. Tynion IV clearly knows how to press my buttons, as there were several moments in this issue I had to stop and take a second to breathe. “Eugenic” is a great sci-fi horror tale, as much as it is a cautionary tale, and Tynion IV understands that. What makes this so successful is that there’s a lot of calm before the sharp, shocking storm. The first nine odd pages set up what feels like a scientific breakthrough, but then drops the mic with the reveal of what the breakthrough means for newborn children. Every page of this book from then on oozes tension and fear, and I was kept on edge right until the end of the book. What’s even better is how unpredictable Tynion IV makes this. There were so sharp turns that kept me hook, and I find it especially interesting how this issue serves as something of a zero issue to the rest of the series.

Something else I found interesting was how Tynion IV developed Cyrus from being a likeable but eccentric saviour, to full-blown insane villain. Cyrus starts off as a humble scientist accredited for saving the world from a killer virus. On top of that, he’s homosexual, living happily with his husband, and and with an eccentrical likeable personality – Tynion’s making sure your first impression of this character is a good one. It’s what makes the slow reveal of Cyrus’ plans and intense messiah complex so shocking and compelling. It’s the idea that any good man with the right ideas can eventually snap, and still think they’re doing the right thing. The most surprising thing though? Cyrus was so passionate in his speech and direction by the end of the issue, that I still felt sympathy for him, and even to an extent supported his idea – and I think that says a lot about how Tynion has developed his character so well.

The story is well paced, and time is handled well throughout the book. The issue acts as a prologue to the next issue of the altered future, and is split into two sections – post vaccine, and post birth. The two sections are separated by eight weeks, and I like how Tynion IV uses this time skip to show how quickly the general populace goes from treating Cyrus as a saviour, to treating him as the bringer of the apocalypse. This change also works well for characterisation – Tynion IV shows Cyrus as essentially the same person, but just with new light shed on his agenda so he appears twisted. But I’m love that the second section is essentially Cyrus moving through space to an interview, blowing people’s minds before immediately killing them all and himself for the last laugh. The latter scenario is paced perfectly to fit the books tone – Tynion IV hits slo-mo to really drag down the degradation of the scientists’ bodies.

Artwise, Donovan’s style is interesting, in that it doesn’t initially strike one as horrific. However, when shit hits the fan, Donovan knows how to perfectly shock you. The opening of the book, as previously stated, is tame, feeling like the final act of a zombie apocalypse outbreak. No one looks evil or villainous in particular – hell, even Cyrus looks like an underdog, the way Donovan has rendered him with outsider clothes and fashion style (or maybe not so much considering this is 2037 AD). But then Donovan drops the full page spread of the first Numan, and the way it was so casually brought about made me process it for a few minutes before I could get over how shocking it is. The extent of detail that Donovan goes to showing the mutated details of this child is intense, but is still essentially humanoid. I guess that’s what makes it so terrifying – that it’s both alien and so close to home, that it could happen to anyone’s kid.

The setting is nicely realised, and constantly evident throughout each scene. There’s a lot of distinct environments throughout the issue – Cyrus’ lab, the TV station, the hospital, the Gonring-Cole campus, and all of them feel unique and fleshed out. The lab at the start feels appropriately foreshadowing, as the room is structured with a set of neon screened computers in a dark room – pretty generic secret base, but you never associate it with that because of the way the dialogue frames Cyrus. What I was disappointed with though was how… present day the rest of the settings feel. I get that this is only set 20 years into the future, but surely there would be some aesthetic differences if not significant technological changes. The lab’s computers look pretty 90s, the campus lecture room looks like it could’ve taken place 10 years ago, and cars and vehicles look standard issue. There are a few little additions that place it as futuristic, including the robot in the hospital and the holograms on Mister Cole’s desk, but I just feel like Donovan could’ve amped up the futuristic aspect of the settings a lot more.

Dee Cunniffe works best in this issues most sinister moments, but serves overall as a solid colorist. The Numan birth contrasts the sterile grey floor of the hospital with the alien, purple skin of the newborn to great effect. The scientists disintegrating at the ending is highlighted with generous amounts of red that it feels like the comic adaptation of Carrie – it’s appropriately visceral. But there’s some subtle moments that works just as well. At the start, during his TV interview, Cyrus has a panel which looks at the TV camera recording him. The lighting is set up to show Cyrus silhouetted, except for his glasses – giving him a sinister look before the reveal has dropped. It adds to the rereadability to the book, showing all the clever foreshadowing that occurs early in the book throughout every aspect of the creative team.

I haven’t thought about a single issue in retrospect as I have with “Eugenic” #1 this year. The story is incredibly layered and almost hits a grey area in its approach to ethics – delivering villains you can’t help but root for. It’s also worth mentioning how every time I thought about “Eugenic” #1, my stomach churned at the terrifying experience I had reading it. That’s how much it sticks with you, and I can’t wait for the next issue to drop.

Final Verdict: 9.2 – “Eugenic” #1 is one of the most shocking and mind-expanding sci-fi horror comics I’ve read in a long time.