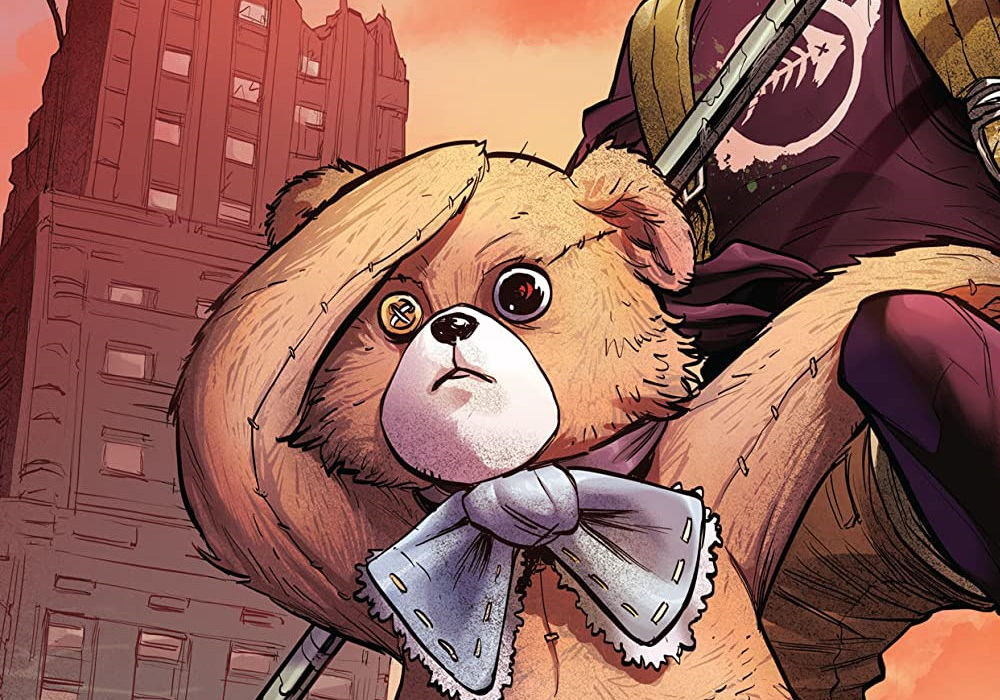 For a topic as dark as the end of the world, plenty of franchises approach the subject from different tones and even genres. Some are tongue in cheek looks at rebuilding a society, using mundane items as currency, or using intentionally incongruous pop culture to set the tone. Others explore the roles of interpersonal relationships, how working together can make us stronger. There are also stories of isolation, difficulty navigating a new world alone. While the latest comic from Boom studios doesn’t exactly blend these three approaches to the end of the world, you can certainly see the influences on their newest post-apocalyptic adventure. In “Eve” #1, Victor LaVelle creates an intriguing mystery by letting the exceptional art of Jo Mi-gyeong create some subtle and evocative worldbuilding. At the same time, he crafts a script that lets the audience know its title character. 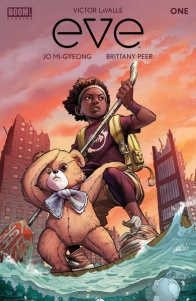 For fans of Undiscovered Country and Little Bird comes a new adventure series from award-winning author Victor LaValle (Victor LaValle’s Destroyer) and rising-star artist Jo Mi-Gyeong (Jim Henson’s The Dark Crystal) about a dangerous journey across a future dystopian America to save the world.

* When the ice caps melted, most of humanity was lost to the hidden disease that was released.
* Now, a mysterious girl named Eve has awoken in secret and must deal with a world that’s nothing like the virtual reality she was raised in.
* In order to save her real father, Eve must embark on a deadly quest across the country, but she has no idea of the threats that await her — or the price she will pay to restore life to a dying planet…
.

One of the strongest elements of “Eve” #1 is LaVelle’s worldbuilding. In many ways, it feels like the perfect intersection of Fallout and the excellent Kipo and the Age of Wonderbeasts. Both feature a post-apocalyptic world, with what remains of humanity relegated to living in underground bunkers. While it might not be as tongue in cheek as the former or as vibrant and colorful as the latter, it does a remarkable job of balancing the tones of the two series. While there is an unsettling ambiguity to what has happened in the world that caused the end times, humanity’s last hope has all the enthusiasm and spirit as Kipo. LaVelle accomplishes this with the strength of the series’ two leads, Eve and Wexler. Eve is spunky and precocious, a curious and adventurous child who loves singing and narrating her days. Eve is instantly endearing, showing her love of life, even if she feels lonely and isolated on her island paradise. Wexler, her android protector, disguised as a beloved teddy bear, is no-nonsense but with just a hint of care. There’s a wry sarcasm in how Wexler speaks, an almost disbelief that he is in charge of an 11-year-old. But something is unsettling about Wexler. The Android is intentionally withholding information from Eve but insists that it’s’ for her protection. Even its form, a beloved toy, is designed to protect her from the original design. To say Wexler is suspicious is an understatement, but for now, it is all Eve has.

LaVelle quickly makes Eve an endearing protagonist, which helps set the book apart. Still, the thing that makes “Eve” #1 memorable is how effectively and rapidly the art of the issues changes the tone and feel of the story. While the book begins with a look into Eve’s adventurous, albeit lonely, life, there are indicators that something is amiss. Yet, Jo Mi-gyeong draws it as almost idyllic. The scenes on the island are bright and vibrant, full of lush, warm greens of thick mangrove trees. Even as she goes back to have dinner with her father, even though there are cold, sterile, and worn down elements, the two strive to make it feel like a home. Brittany Peer’s work on coloring helps change scenes and locations’ dynamics because the scenes with her father have warm, homey lighting. It makes her life feel comfortable and happy, even if they are the only person the other has to talk to; then she wakes up.

The midway reveal of “Eve” #1 is that, at least in some part, the life she was living, her time on the island, her time spent with her father were all simulations as she lived in a cryo-stasis. The brilliance of it all is that those settings, once the home of a happy, child has become an uncaring and brutal world. Once again, Peer’s coloring of these scenes makes the feel of the book completely different. Many scenes feel as if there is an almost green light that makes everything feel foreign and wrong. Eve reluctantly has to enter a new world, one that is darker and potentially more dangerous. It’s interesting to see how Mi-gyeong reuses the sets to similar effects. Simple things like plants in the kitchen or a viewscreen to give you a look into the outside world are changed into a window of death or a sterile remnant of a world where Eve is a stranger.

Overall, Jo Mi-Yeong’s art in “Eve” #1 does a lot to build in little bits of worldbuilding that helps elevate LaVelle’s script. This is especially true when it comes to Wexler, who informs Eve that the form of the teddy bear is to hide its true design. Yet, throughout, we get glimpses of the true form. Shadows that don’t quite match up to the falling apart teddy bear, long spindly legs that support the weight and strength of Eve’s only companion. Throughout the issue, there are little hints of what has happened, blueprints and weather maps suggesting the scale of the event, an ominous decore of trees and seeds. It effectively builds the mystery of the world Eve is waking up to, and because Eve is such an engaging character, you want to go and explore that world with her.

That’s the best thing about “Eve” #1. It finds a reason to make you care about the central mystery. Because we spend so much time with Eve, you get a real sense of who this character is, what drives her, and what motivates her. Knowing Eve so well makes it more interesting to see her explore the world she woke up in, perhaps even a world she never knew in the first place. Add some beautiful art to the mix, and you have a series that is worth checking out again.

Final Verdict: 9.0 “Eve” #1 is the best kind of first issue, building a mystery through subtle and evocative art but making you care about the character first and foremost.