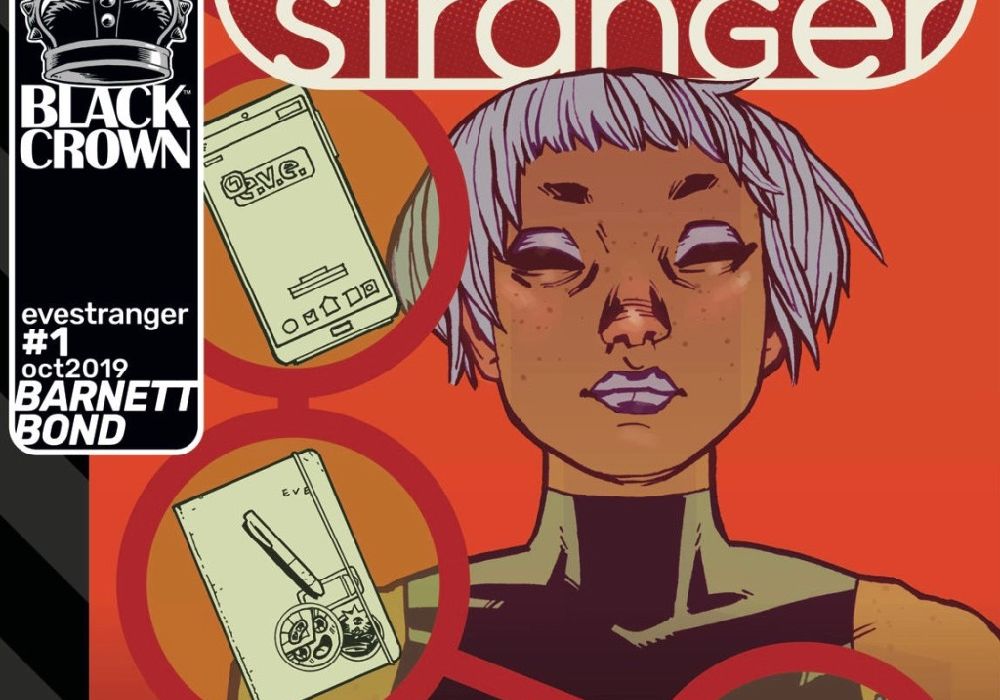 “Eve Stranger” #1 is an outstanding debut issue and rock solid foundation for what is set up to be an intriguing and eccentric high concept series. (Warning: minor spoilers ahead.) 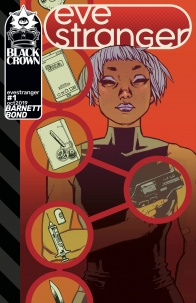 You have unlimited funds, a jet-set lifestyle, and extraordinary abilities. And your bloodstream is filled with nanobombs. The contents of a syringe will deactivate them for a week and also wipe your memory. So what happens when you develop a sneaking suspicion that you’re actually working for the bad guys? EVE STRANGER, amnesiac-for-hire.

With a less talented creative team at the helm, “Eve Stranger” could start to feel like a high concept series destined to go off the rails at any moment. “Okay, picture this: it’s Memento meets La Femme Nikita (the French film, not the series), but told in second-person with semi-obscure references to Icelandic folklore and yes there’s a mysterious pill, but it’s not anything like the proverbial ‘red pill’ or ‘blue pill’ – much less both – despite it’s red/blue color scheme and – oh yeah – did I mention there’s also a super-sweet bright yellow Rolls Royce motorcycle and a purple stuffed animal that is said to be massively important, but we don’t yet know why…?”

Thankfully, writer David Barnett has more than enough smarts and talent to incorporate pretty much every element contained in the fictitious elevator pitch above without things ever seeming the least bit hackneyed or over-the-top. In fact, much like “Punks Not Dead” – Barnett’s other dope-as-hell Black Crown series – the overall effect is akin to an emotional and intellectual kick in the teeth. (See p. 4 of “Eve Stranger” #1 for illustrator Philip Bond and colorist Eva de la Cruz’s visual reference.) Bottom line: Barnett is an outstanding writer and his script for this debut issue is damn near bullet proof.

After a one-page flashback seen from Eve’s point of view as a child, the next five pages are driven by the cheeky yet world-weary musings of a second-person narrator who clearly doesn’t have all the answers and openly shares that frustration. Nonetheless, the narrator imparts what they do know, simultaneously bringing the titular protagonist and the reader up to speed.

The interplay between Barnett’s text and Bond’s illustrations throughout these info-packed opening pages is completely captivating and utterly brilliant. Like an overdubbed movie originally presented in a foreign language or an ill-fated filmstrip from sixth grade health class, the words and images are delightfully out of synch with one running slightly ahead or lagging behind the other at any given moment. There’s a great feeling of tension – punctuated by comic relief – as vital facts are revealed just in the nick of time. The reader shares Eve’s confusion, building great empathy for the protagonist right from the start.

Throughout the entire book, but especially in the opening sequence, Bond’s illustrations are rich with key visual details, while his framing and shot selection artfully constrain the pacing to deftly avoid visual overload. The effect is both dynamic and cinematic, almost like a gritty European arthouse thriller. As the backstory quickly unfurls, the first action sequence is already building, ready to explode just four pages into the book.

Damn. This is how it’s done.

De la Cruz’s colors underscore Bond’s visual structure, helping to guide your eye seamless across the page. Eve is unmistakable and immediately pops off the page with her slightly desaturated purple hair and lips – the same color as her plush toy, mobile phone case and gun. There’s also plenty of red and the aforementioned bright yellow bike. Notably, the real-time sequences that feature Eve are generally quite colorful and saturated, while flashbacks and another scene at e.v.e. project headquarters are distinctly desaturated and more monochromatic. There’s also some great placement of panels devoid of details with solid color field backgrounds.

For the most part, after the opening sequence, the rest of the book adds layers of narrative detail while introducing a few key antagonists as it continues to build toward the final action sequence and expertly constructed concluding cliffhanger.

By the time we hit the final two pages, Eve is clearly feeling her mojo. After making hasty work of a few random goons, one of her rescuees asks, “Are you a good lady or a bad lady?” After a flashback panel insert, Eve responds, “I’m a good lady.” She pauses for effect, then adds, “The best, in fact,” effortlessly shooting yet another rando over her shoulder without even turning to look – a cavalier confidence that can only portend a precipitous fall.

To be sure, there are many unanswered questions, but that’s exactly the point. Barnett and the rest of the team have piqued our interest by providing a rock solid foundation on which to build what promises to be a very intriguing, dynamic and witty series, full of action and dark humor.

Also well worth noting, the backup story, “Eve Stranger Ace Reporter in . . . The Cat Who Got the Dream” – written and illustrated in a completely different style from the main comic – provides a quirky, almost surreal meta-commentary on the main story and the larger Black Crown universe.

Final Verdict: 9.3 As debut issues go, “Eve Stranger” #1 is damn near as good as it gets. An outstanding addition to the already solid Black Crown lineup and another hit for writer David Barnett.