“Eve Stranger” #2 is a comic that lets its characters kick ass and have fun while doing it. Eve Stranger #1 introduced us to the premise of Eve and the E.V.E. (Enhanced Vascular Emissary) project and “Eve Stranger” #2 lets itself be an Indiana Jones-esque adventure. Running with bulls to complete a client’s mission and having whiskey for breakfast afterward is something Indiana Jones would do, right? (At the very least, it sounds like what Marion Ravenwood, from Raiders of the Lost Ark, would be doing in her spare time). And even though there is a reason to be self-loathing in “Eve Stranger” #2- David Barnet writes Eve as a strong-headed survivalist, who likes to have a good time even in the middle of chaos. She’s written quirky and we see even more of her quirky side “Eve Stranger” #2. It’s clear that Eve’s a fully realized rebel with a smile. 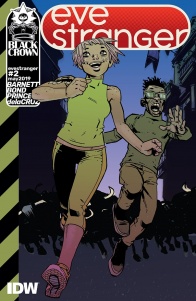 Eve Stranger can do anything thanks to the nanotech that she has to inject every week to stay alive… anything except remember who she is or where she’s been. Her talents sold by the shadowy E.V.E. Project to the highest bidder, Eve’s latest mission finds her on the run in Pamplona, Spain. High-octane adventure, weird science, and doomed romance meet the jet-set in “Retrograde”!

The setup behind Eve Stranger’s character allows for wackiness like we see in “Eve Stranger” #2. Since she’s always on a mission given by a random bidder through the E.V.E. project, she can be anywhere and be helping with any task at any time. It’s a brilliant concept. Also, it’s refreshing that in “Eve Stranger” #2, that Barnet took that concept and is having fun with it and not taking us down a morbid path, as a lot of other modern comics would. I can’t stress it enough, “Eve Stranger” #2 is a fun comic. There’s a tiny weird rich guy, a sketchy background group controlling everything, a bar fight, and much more. This comic is wild. “Eve Stranger” #2’s wildness is what makes it unique.

On top of being fun. “Eve Stranger” #2 is one cool looking comic. Phillip Bond’s cartoonish, but realistic styled characters have a unique edge to them. You know which character you’re looking at thanks to their unique style from their faces to their clothes. Which begs the question is there any artist out there who can draw better clothes than Bond? He can draw an awesome looking jetpack too. And Bond’s art has an energy to it. Each panel has a kinetic flow. Bond’s art flows like whiskey coming from a broken bottle. For a comic to be sold as “high-octane thrills,” as described in the solicitation, the art in the comic has to be high octane itself and Bond’s art meets that task and excels at bringing the thrill to life in “Eve Stranger” #2.” This is a comic on the move. The color palette from Eva de la Cruz helps the vibe too. Cruz’s colors give “Eve Stranger” #2 a polished popish tone that goes well with Bond’s clean art. The art team is in top form gear here.

With “Eve Stranger” #2 pay attention to each character’s facial expression. You know exactly what each character feels at that given moment thanks to Bond’s expressive artistic nature. The feelings of surprise, excitement, fear, and attraction are expressed so well by the art. Bond is on point with his face game in “Eve Stranger” #2.

Though this comic is fun, Barnett shows us sadness to Eve’s story too in “Eve Stranger” #2. This sadness really helps you connect with Eve. You want to see her succeed and to remember her past. The art captures a somber, melancholy feeling so well through the flashbacks we see of Eve’s forgotten memories. The flashbacks in “Eve Stranger” #2 make you realize how important it is for Eve to somehow regain her memories. The flashbacks scenes were a great way to add emotional weight to the story. They make the reader more invested in Eve’s journey to rediscovering her memories.

Another tip about “Eve Stranger” #2 is that you shouldn’t skip on the back story. Yes, it’s got a completely different tone than the main story, but Liz Prince’s gorgeous artwork makes reading the back story worthwhile. Prince’s art is very cutesy and Cruz’s colors give her art a nice bubblegum hue. Barnett’s meta-ness is funny too. Really you can tell that Barnett is having fun with the story in this book.

From the main story of “Eve Stranger” #2, the cliffhanger really shows that “Eve Stranger” can go anywhere. One might say, the ending is “bananas.” (I’m sorry). I, for one, am excited to see where else this comic can go. Hopefully, the series keeps up its wacky tone presented in this issue.

Overall, I don’t have anything bad to say about “Eve Stranger” #2, except that the comic reads really fast. Comics always do go by fast when you’re having fun. Issue two is an exciting continuation of the story and sets up a world that will be interesting to explore.

Final Verdict: 9.5 – “Eve Stranger” #2 has it all: adventure, whiskey, a head explosion, romance, and a jetpack.