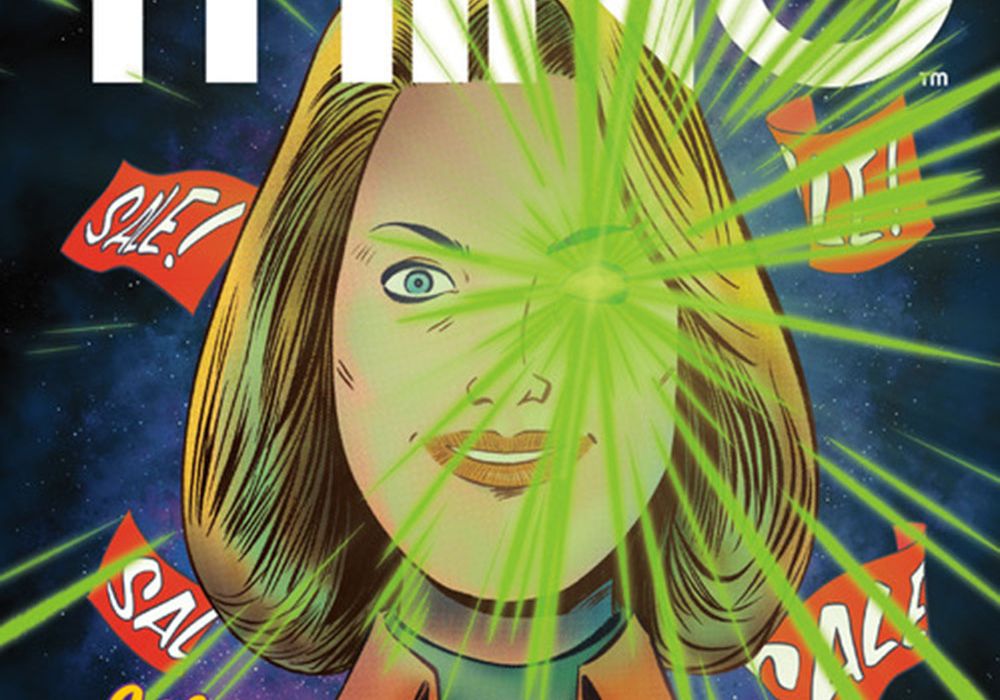 The Berger Books imprint of Dark Horse Comics launches another thought-provoking new series with “Everything” #1 not with a thunderous clap, but with a mood-altering invasiveness thanks to the creative team of Christopher Cantrell and I. N. J. Culbard. Borrowing from 1980s suburban paranoia, the book acts not so much as a propulsive narrative that kicks the the series story into high gear, but as a series of vignettes likely intended to evoke a kind of post-Cold War American gothic landscape turned on its head. As the decade of excess is increasingly plumbed for modern storytelling, the series trades in the kinds of currency we are dealing with today, namely the selling of one’s soul for the sake of convenience and false piece of mind. 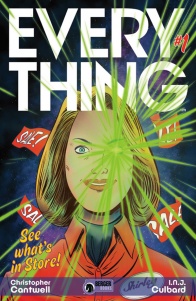 EVERYTHING is a gleaming new mega-department store which arrives to extraordinary thrill-and rapidly escalates to inexplicable mania in the small town of Holland, Michigan. When random hellish fires and unshakable psychic disturbances start to overtake the community, a few–like depressive out-of-towner Lori and a suspicious local named Rick–begin to suspect EVERYTHING and its catalog-perfect manger, Shirley. Who-or what-exactly is in charge here . . . and what insidious plans are in store?

After closing the cover on this first issue, the initial reaction may be that this first foray feels slight and without much of a hook. Upon closer rereading, the book reveals itself to be a commanding setup issue of a different stripe, one with which readers may not be accustomed. Character introductions and importances are contextually downplayed in favor of creating a tonally unsettling look at small town middle America and its denizens on the cusp of upheaval. It’s a perfect example of a book that both relies too heavily on the publisher’s solicitation text (included above) and probably benefits from its readers going into the story without having read it, an unfortunate Catch 22.

Since the image of big box retail carries such strong implications in our current society, “Everything” traffics in some built-in prejudices on the part of the reader. While some may lament the deaths of local businesses, they concurrently revel in the wonders of to-your-door grocery delivery. Putting oneself in the shoes of the residents of Holland, Michigan on the morning of the grand opening its first superstore, is not dissimilar to the feeling of receiving one’s first Prime Now order. Consumerism’s progress now rivals the wonder of the space race half a century ago.

Cantwell’s scripting confidence, particularly with the era and likely honed in the co-creation of AMC’s Halt and Catch Fire about the early days of the personal computer arms race, is on display in both his economy of dialogue and confidence in I. N. J. Culbard’s artistic chops to carry much of the book’s subversive tone. Musical stanzas trip across the panels in Pied Piper primary colors. High chroma neons act as interstitials between panels in the largely wordless final pages of the book and zipatone effects add texture to Culbard’s large color blocks. Culbard’s linework is economical and bold, capturing the illustrator’s masterful grasp on caricature and body language.

The most intriguing element of this first issue is Lori, a loan officer and former medic who has turned to the bottle to get through the mundanity of her life and perhaps escape the tragedies that fraught her past. How she fits into the narrative, like most characters in this issue, is unclear at this point, but there’s a sympathetic aspect to her character that is palpable. Her deadpan advice to the new home buyers that visit her in her office is darkly comic and tinged with the melancholy of one disabused of life’s more momentous joys. When she crosses paths with the proprietor of the town’s likely soon-to-be-extinct stereo store, Rick, she deflects his advances with ruthless economy. In the books final pages, she’s like a sleeper agent wakened from a years-long stupor, and Culbard captures that awakening with equal economy. The other character’s in Cantwell’s script are a bit more one-dimensional at this point, from the town’s lonely public servant (who actually lives outside Holland’s city limits) to the slacker son who gets hired at the new superstore after a largely perfunctory interview by Shirley, the new retail outlet’s manager. She’s the epitome of the company spokesperson, playing the role of the ambassador of glittering convenience in both word, deed, and appearance. It’s not a spoiler to assume there’s more going on underneath this perfect veneer. The Allredian cover has already tipped the storyteller’s hand.

Like Mike Allred’s graphic design-inspired style, there is a symmetric geometry at work on the pages of “Everything.” Panel layouts are straight-edged, clean, and stacked like well-placed blocks, echoing the banality of the small-town existence that is likely to be disrupted in future installments. When a vagrant’s immolation is revealed in the final pages it cuts a swath through the pages’ (and Shirley’s) Stepford-like presentation. While it’s a shocking event, it does not yet have context in this intriguing setup issue that, at least for now, promises a slow burn narrative uninterested in rushing headlong into its plot twists. While maddening on one hand for those who expect slam-bang debuts, there’s enough on these first 24 pages to incept the book’s suburban eeriness into reader’s brains. It’s an intriguing way to approach a first issue in a world where creators feel compelled to make a splash, not unlike the ribbon-cutting of the monolith of convenience depicted within the book’s pages. The counter-intuitiveness of the storytelling aesthetic at work here from Cantwell and Culbard may just be enough to grab readers attention. Instead of taking hold of our metaphorical lapels, they seem to be aiming for a vice to the gut.

Final Verdict: 8.0 – The simmeringly sinister premiere issue of “Everything” is a discomforting debut from an accomplished creative team that seems unconcerned with smacking readers over the head with its storytelling prowess, instead opting for a more thought-provoking approach that respects readers’ patience.