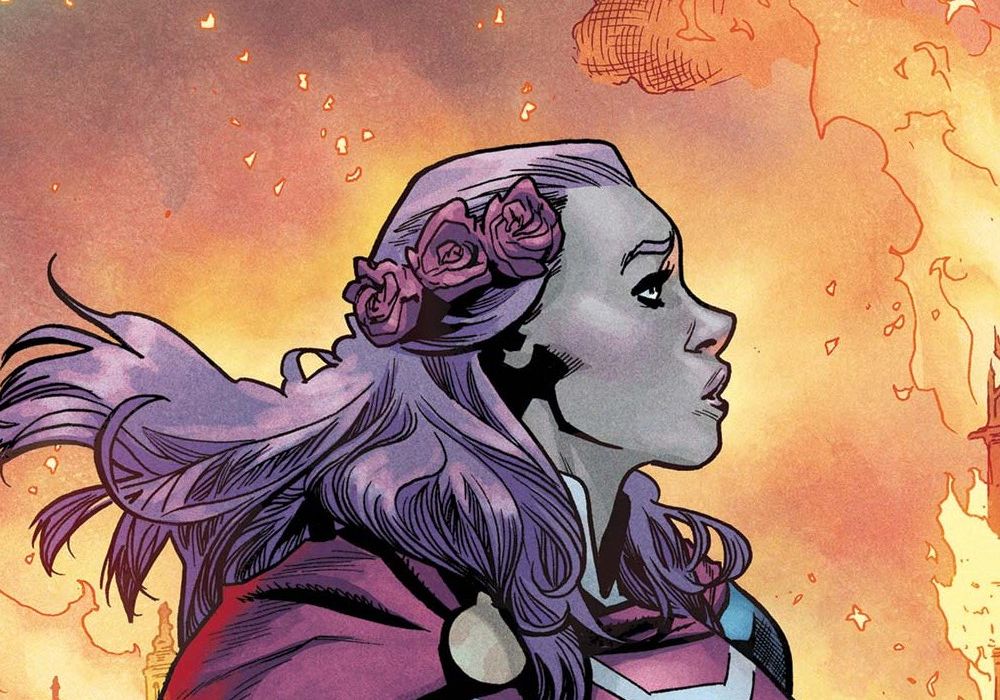 Marvel’s “Excalibur” has been a “Dawn of X” title that is unafraid to explore heady concepts. In addition to the usual X-Men tropes, “Excalibur” brings the Braddock family to the spotlight. The series is usually headlined by Captain Britain who passed the mantle to his sister Betsy Braddock. This new incarnation of “Excalibur” differentiates itself by being set during the time of Krakoa. Numerous seminal status quo changes are layered on top of each other during this comic book series. Betsy Braddock and Kwannon no longer share a body. Shogo has morphed into a dragon. Most importantly, the nation-state of Krakoa has emerged as a place for Mutants to thrive. 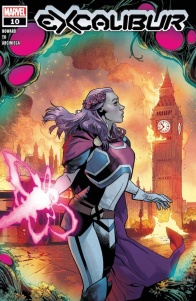 LONDON IS BURNING! Captain Britain is faced with her hardest decision yet as Britain goes to war with Krakoa. Can Excalibur survive being torn between two worlds?

I have a feeling that “Excalibur” #10 was written outside of the context of the recent string of brutality based on the shipping date of the issue. However, it is nearly impossible to read this issue without seeing a string of current events. The X-Men mutant metaphor is in full force here even echoing classic stories like “Days of Future Past.” Author Tini Howard does a great job paying homage to that story especially considering some of the visuals layered in from Marcus To. On top of the allegory of current events, Howard references a sea of Marvel continuity culminating in a decent cliffhanger properly foreshadowed in previous issues of the series.

I already adore Marcus To’s pencils but Howard’s script pushes To to add a lot of characters and elements on-panel. If Marvel’s comic books are meant to reflect the world outside of our window, I’m glad to see the House of Ideas diving in headfirst into social issues. To has such a clean and beautiful line and depicts elements of Krakoa in a beautiful, unexpected way. One scene with a flaming Xavier head effortlessly ties the book back into the larger X-Men line. While To’s clean, nimble line is a huge part of why this title works so well, the other half of the magic is the bizarre visuals from Howard. Howard draws Betsy fighting her evil brother on a unicorn in one page and the visuals take full advantage of the script.

To’s page layouts are excellent in the issue. There are panel bleeds and a good amount of characters on any given page. As soon as I think I have a good understanding of where the comic book is going, the plot pulls the rug out from underneath readers. The title makes yet another status quo change for the Braddock family. To’s thoughtful lines make the slightly unfocused script come together in a more cohesive manner. The issue’s surprise finale takes a massive left turn for the narrative but pushes To’s art in a different direction as well. The layouts of the story break the fourth wall and dive straight into a seminal aspect of Captain Britain’s mythology.

Despite a few flaws, I find “Excalibur” #10 to be an incredibly amusing comic book. One major flaw that I can’t look past is the characterization of Kitty Pride. Pride has undergone a drastic turning point ever since the beginning of ‘Dawn of X’ that Howard doesn’t explore in-depth. “Excalibur” has a huge plot and every issue packs a lot of huge set pieces into the mix. Howard’s writing can miss some of the important subtexts in the voice of Pride as the issue rapidly attempts to stitch all the disparate narratives together. I’m glad to see Howard’s limitless ambition for the comic but equally disheartened to see Howard not taking advantage of the smaller plot moments that are hiding beneath the surface. The issue’s plot advances too rapidly for Howard to script all the characterization needed.

While I still enjoy the title for now I always have a fear that Howard is going to lose sight of the complicated narrative of “Excalibur.” On top of everything else mentioned previously, this book is going to transition into a major event storyline in just a couple of months. There’s a lot to love about “Excalibur” #10 from the wonderfully vivid artwork to the ambitious script. Also, seeing Howard touch on current topics and examine the Mutant metaphor in greater detail is wonderful. Despite so many stray plot threads in the title, To’s art makes the book seem carefully plotted.

Going forward I think readers are going to hit a point where “Excalibur” needs to become more insular and focused. Each issue introduces new characters and elements by glossing over important character dynamics and interactions. “Excalibur” could consist of a team made up of only Betsy and her family with Howard finding a way to fill all of the pages effortlessly. I hope to see Howard bring the disparate threads of “Excalibur” come together more seamlessly in future issues while retaining that seem impressive level of ambition. The way Howard challenges Marcus To as an artist makes this series a phenomenal use of his talent. “Excalibur” #10 is a solid reintroduction to the fringe Krakoa team and To’s beautiful pencils that loses sight of essential characterization.

Final Verdict: 6.9 – “Excalibur” #10 is a visually stunning reintroduction to the comic with an ambitious but flawed script.