If you’re somehow glad, and it all looks good, who you gonna call? When it come to infernal menaces, “Exorsisters” #1 shows you could do far worse than the Harrow twins’ mix of intelligence and humor to combat a surreal look at Hell. 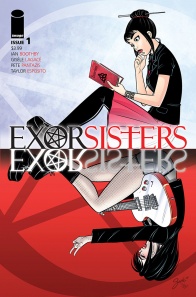 Did you sign a deal with the Devil? Has your fiancé been dragged to Hell? Then Kate and Cate Harrow should be the first ones you call for timely soul retrieval at a reasonable rate! But why are these identical twins so different? Is there a darker secret? An all-new ongoing series by Eisner Award-winning writer IAN BOOTHBY (The Simpsons, MAD Magazine), with art by GISÈLE LAGACÉ (Ménage a 3, Archie).

When it comes to “Exorsisters” #1, Ian Boothby seems to have a lot of fun with his eponymous duo, Cate and Kate Harrow. The young women work as modern-day exorcists, with all of the demonic interference that implies, but that doesn’t necessarily mean things have to be dark and dour. Readers can really get a feel for what they’re getting into when the sisters mention that demons frequent almost every Internet message board (which honestly might explain quite a few things about people on the Internet at large).

In terms of the general style of the story, think in terms of some of the shorter plots of John Constantine, the Hellblazer, from DC Comics and its Vertigo imprint: tricking evil and outsmarting it, rather than facing it down with higher level magic or intricate rituals. In essence, a core part of the series seems to be the idea of evil being, while dangerous, not particularly smart, so intellect is more important than force (not to say that force is not used on occasion).

While the idea of opposite sisters fighting demons isn’t exactly  original, the use of an established formula helps to settle readers into what is different about this series. Rather than attempt to dispense with formulaic storytelling altogether, Boothby  uses the established tropes of the occult investigation and sibling team tales and spins them together into a whole that is greater than the sum of its parts. After all, there is a reason why these kinds of formulas of storytelling came into existence in the first place: they work, when used well.

On the surface, Boothby’s writing of the Harrow twins seems to be almost stereotypical of fictional siblings: the polar opposite sisters. Cate is serious and all business, even to the point of wearing a suit and wearing her hair up. Kate is rash, rude, and impulsive, from drinking heavily for fun to tricking a demon into getting out of their hair while in Hell. However, this look is overly simplified, as Boothby writes the two of them in far more of a yin and yang style, with each having some elements of the other, however difficult they may be to uncover. Kate is not above telling a client to get some sleep out of joking concern over her haggard appearance, while Cate is prone to tease her sister when she is in embarrassing situations, and the two of them can occasionally have a mindset that is more or less in synch when researching demonic threats. Rather than be entirely one side or the other, Boothby allows his protagonists to flesh themselves out with a mixture of the colder sides of logic and the warmer sides of emotion for both members of the “Harrow & Harrow” team. Their back-and-forth rapport forms the majority of the comedy and story of this debut, and is all the stronger for it.

Hell, for its part, is a source of both drama and comedy, depending on the situation at hand. Demons range from disturbingly powerful to relatively meek and helpful to just overall silly or gross. By showing that Hell is not too dangerous to the heroines, to the point that they can regularly travel to it to figure things out, Boothby helps set the stage for the adventurous, trans-world storytelling that seems to be a key part of this tale, even while a certain mysterious woman works her way back into their lives with her own shocking revelations about the duo to shape the series’ story to come.

Gisèle Lagacé provides a very cartoonish style that fits well into the fun, animated, at times disturbing storytelling of “Exorsisters” #1. The key characters of this issue’s A plot, from the Harrows to their client, all are drawn with a softer touch, from wide cheeks to large eyes, emphasizing the idea of them being youthful and kind, even if some (like Kate) may be a bit rough around the edges. By contrast, the less trustworthy people in the story have leaner, thinner cut physiques and smaller eyes, giving an air of, if not menace, at least unease for readers.

Lagacé excels most highly in her use of body language, especially when it comes to Hell and the Harrow sisters. With Cate and Kate’s animated style of talking (especially the latter), and their client’s worried and saddened posture and facial expressions, so much is told of the story that may have been overlooked with other, less adventurous artists. In fact, a large part of the comedy comes from these postures, from leaning into a shot from off-panel to nonchalantly calling back for someone to do something mundane in spite of the supernatural elements all around.

Another focus is the use of surrealism, in particular with regards to Hell itself. Using various perspectives, including a Dutch angle or a view of a gigantic eyeball jutting out from below the heroines, the ever-changing landscape of the infernal realm shows a perfect place for Lagacé to experiment with different forms of these apparently occasionally shapeshifting entities, almost seeming akin to an “Alice in Wonderland” approach with how the relatively mundane sisters interact with such an overall bizarre world, in spite of knowing a thing or two about how it runs.

Pete Pantazis provides two different general color schemes: the normal world, and Hell. For the normal world, colors are, in all, pretty natural. You have a normal blue sky and green and brown for the land, simple enough colors for each character’s wardrobe, hair, and face, et cetera. Even when this shifts to a slightly darker one for the woman in the B plot, everything still seems to be generally normal in terms of how colors function. All of that seems to go out the window in Hell, with dark shadows all around to contrast against a yellow-orange glow around individuals, a true “fire and brimstone” approach to the Inferno that helps to illustrate how, much like the creepy beige colorings of a certain demon, Hell is somehow “wrong” when compared against the mortal world on a fundamental level, making the heroines all the braver for regularly going in (even if they seem to be in very little danger themselves).

Together, this seems like a very promising start to a new series, with hope for much more of the Harrow sisters to come.

Final Verdict: 8.5 – Though a bit formulaic at times, “Exorsisters” #1 shows a lot of promise, and a very good balance of horror and comedy, and demonstrates why following a formula isn’t necessarily a bad thing at all.