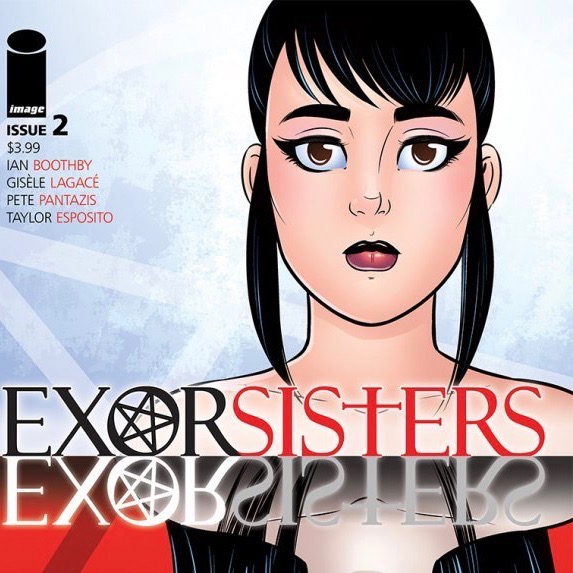 “Exorsisters” #2 starts strong, with great dialogue and fantastic artwork. As the issue progresses, however, it starts to bog down, introducing backstory that tends to make it feel a bit formulaic. (Warning: contains minor spoilers.) 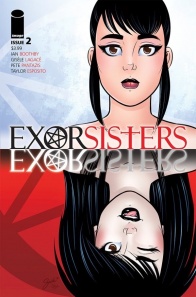 After a demonic domestic dispute, Cate and Kate Harrow are visited by their estranged mother, leading to revelations about how the sisters got dragged into the dark world of deals and devils.

“Exorsisters” #2 begins with a wonderful scene that immediately showcases writer Ian Boothby’s impeccable comedic timing and illustrator Gisèle Lagacé’s considerable visual talents. In the first page-and-a-half, we see siblings Cate and Kate Harrow, the titular Exorsisters, in the midst of a routine house call. A tween blonde girl with braids sits on the edge of her bed, her eyes as wide as saucers, staring into the distance. Her mouth hangs agape, her body looks rigid and she seems unable to speak. Behind her, in the background, the frazzled mother who presumably called our protagonists stands awkwardly in the doorway, arms wrapped around herself in a feeble hug. Meanwhile, the more detail oriented, methodical, prim and proper sister (Cate) tries to gather more information while her punkish, rebellious, hedonistic, otherwise identical sister (Kate) simply smarts off and cracks wise. Turn the page, however, and we learn it’s not the daughter who’s possessed, but her father

It’s a simple, engaging sequence that also serves as a microcosm for the book’s overriding concept: two comedically different sisters try rid the world of evil, one exorcism at a time. On it’s face, it’s a mildly clever mashup of several prevailing tropes. In practice, some damn fine execution kicks it up a couple of notches.

In the first third of this issue, especially, the composition, page layout, colors and dialogue are all on point. Lagacé’s command of body language, for example, is practically perfect. Scan these pages without actually reading the dialogue and you still get a very strong sense of precisely what’s happening, particularly within the context of the familial relationships between the two girls and their mother.

Similarly, the figures are arranged within each panel and page in a way that simultaneously feels organic and natural, yet thoughtfully composed and highly intentional. Everything just flows. In many ways, the “stylized reality” aesthetic is reminiscent of recent “Archie” comics. No wonder, with books like “Archie Meets Ramones,” “Josie and the Pussycats” and “Archie Vs. Predator” to her credit, Lagacé clearly knows how to blend essentially realistic designs with overtly cartoony elements to create an immediately accessible look and feel. There’s definitely a big dose of camp, more than a dash of cool and an absolute ton of fun.

Without a doubt, Pete Pantazis’s colors keep the momentum going. The sisters’ trademark colors are red, black and white. Their outfits are constrained to these colors and it makes them just pop off the page. Wherever the girls appear, your eye immediately goes right toward them, especially Cate, with her red shrug worn over a simple white top and accessory red scarf. But even her sister Kate, in a black leather jacket and white Ramones t-shirt, grabs your attention and won’t let go.

Boothby’s dialogue is short and to the point, deftly incorporating information that both drives the story forward and underscores key character traits. After exorcising a demon, Cate finds herself spattered with sickly brown-green glop. Meanwhile, her sister’s clothes seem strangely unaffected and pristine. Cate clenches her fists at her sides and demands, “How do you never get any on you?” A very interesting question, indeed. One that, by the end of the book, we may have some inkling of understanding.

With a fantastic one-two punch of great art and well written dialogue, this series would seem to be perfectly positioned to really make some noise – and maybe it is – but after a stellar beginning, much of the second issue flags as we move into a series of monochromatic flashbacks detailing how the girls’ mother ending up trading short term gains for some serious long term problems. Clearly, all of this will factor in heavily in upcoming issues and drive the plot, but Cate and Kate are such great fun I’m not entirely sure we need a heavy does of backstory at this point to stay invested.

Honestly, with its monochromatic artwork, slower pace and heavy reliance on some fairly standard tropes, the energy just plummets as the story flashes back to the pre-Cate and Kate era. Everything that felt so unique and inspired about the book in its opening pages suddenly starts to feel formulaic. Unquestionably, Cate and Kate are the stars here and the book works far better when it centers on them. Hopefully, with the backstory out of the way, the book will re-center on them, with everything else off to the side, supporting these two wonderful protagonists.

Final Verdict: 7.8 –  There’s a really good concept here and it’s told with some moments of brilliance, but a lackluster backstory and over-reliance on familiar tropes tends to drag it down.