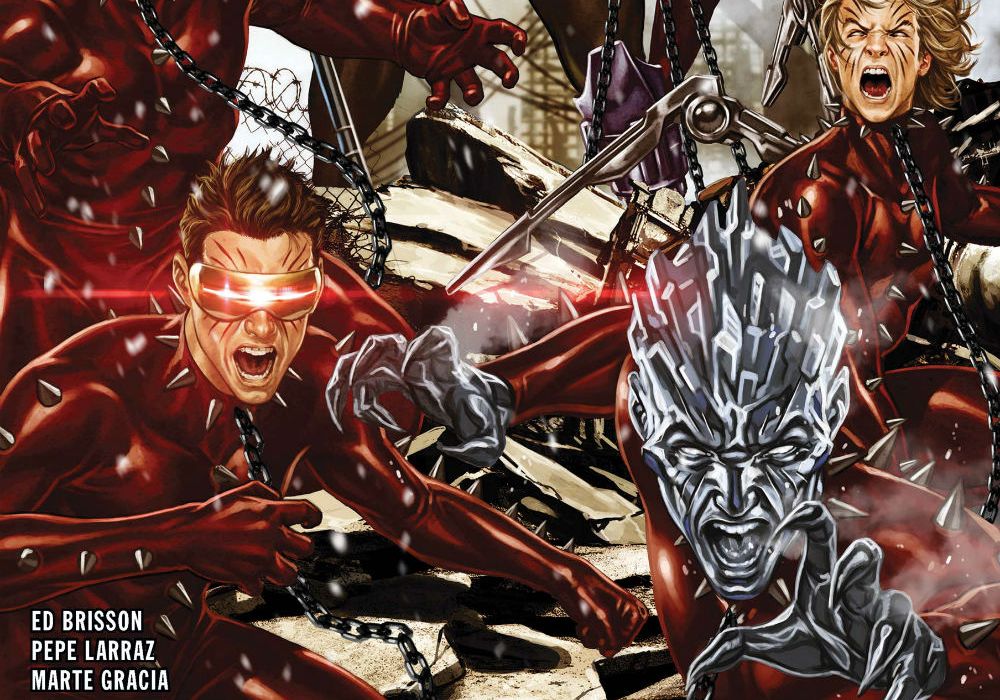 “Extermination” started very strong only two weeks ago, setting up the story that will, allegedly, return the original five X-Men to their point in the timeline. Strong character moments, surprising reveals, and beautiful art were the highlights then and, while those same aspects remain on this second entry, they do lose some of their impact this time due to exposition that overstays its welcome. 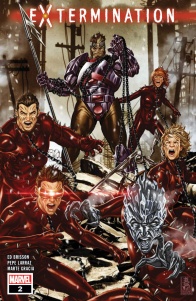 Cyclops. Iceman. Angel. Beast. Marvel Girl. The original team of teen mutants brought together by Professor Charles Xavier many years ago have been shunted through time to find a world they barely recognize but were determined to help. Now, finding themselves targeted for death, the future of mutantkind lies squarely in the hands of its past. Writer Ed Brisson (OLD MAN LOGAN, CABLE) and artist Pepe Larraz (UNCANNY AVENGERS, AVENGERS: NO SURRENDER) answer the biggest question of all: can the fate of the X-Men be changed?

X-Men events usually revolve around some theme or topic. The burning hate of humanity for mutants reach a crescendo and explode in the shape of a villainous master plan. Internal strife from within the teams cause confusion and distrust. And, more often than what it should be, someone, from someplace or sometime in the future decide to change things by their own hands. To deliver something unique on these dimensions, after decades of stories, is no easy feat, and the reason why Ed Brisson and Pepe Larraz should be commended.

Some explanations first. “Extermination” is as much a story as a slate-cleanser for Marvel on their X-Men universe. For the last years, since Bendis took over the line, the original five X-Men have been stranded in the present, with no way of returning to their home. Multiple storylines, events, and reveals later, their own story amid their adults counterpart have generated layers of backstory and character development, especially for Angel and Beast, who’ve gone as far as developing completely different power sets and skills. With that said, with the looming Uncanny X-Men relaunch coming in November, the need to close the loop on this storyline is prevalent and doing so in a high-note sendoff to these characters is a worthy ambition.

The most obvious high-point of “Extermination” #2 is the art by Pepe Larraz. Fresh from his participation of the weekly “Avengers: No Surrender” event, the artist shows no sign of slowing down. His composition is very strong, offering interesting ways to present reveals (the first scene at a supermarket involving two mutants is a good example), as well as wider group shots and easter eggs (pay attention when the expanded X-Men roster is seen at the mansion and how each individual is doing something unique). Panel design is also a highlight: Larraz seems to choose a more traditional, rectangular format when showing quieter, conversational moments, leaning on alternative frames (diagonals and overlapping panels) for when the action breaks out. It adds to the sense of mayhem and movement the characters themselves are going through and it pulls readers in. His facial expression also have a style of their own: bordering on the cartoony, but never going fully deformed, Larraz present the main players of “Extermination” with their emotions slapped on their faces.

Colors by Marte Gracia are more subdued in “Extermination” #2 than the series’s first issue, largely as a demand of the script. Half of the story is told out in the open in a rainy night, so the heavy use of darks and shadows is predominant. The other half is set largely in interiors (the mansion, derelict laboratories and other unsavory environments), where lighting takes center stage with the presence of strong reds and purples setting the artificial tone. Regardless of setting, Gracia never interferes with the narrative, rather contributing to it by adding a sense of claustrophobia, very much aligned with the stakes the story is playing with.

Brisson overall story navigates the usual X-Men themes really well. That confusion on who really is the villain and what is the end-game of all involved is excellent. Readers will genuinely feel confused about why the main antagonists are converging the way that is presented, but that is not due to poor storytelling, but rather because of a strong understanding of how a mystery story should work. These are not comic book villains prone to reveal their plans before anyone can actually cancel them out. In the middle of all the noise, characters remain true, especially the five original leads: there is a consistency with how they’ve been portrayed classically, but also with the new layers added since they came to the present, that is rewarding for long-time fans. The plot reveals and how some other, less-seen characters come into play are equally compelling, adding to the guessing game of what is actually going on.

Where some criticism can be drawn is on how Brisson chose to pace this second issue, especially after the very strong, fast-paced debut. There is a lot of excitement going on on these pages, but there is also a lot of conversation focusing on explaining what came before. While this is understandable, given the inherent complexities of this story and characters, it can slow the experience down. Hopefully this was done now, at the halfway point of the narrative, to prevent a slow-burning ending, but it is nonetheless felt when looking at this issue as a stand-alone.

All in all, there is certainly a lot to appreciate on “Exermination” #2, from its true characters, intricate mystery and intriguing villains and motivations, as well as the beautiful and consistent art package delivered by Larraz and Gracia. This is an event that should ring true to any X-Men fan, also being a satisfying send-off to characters and storylines in favor of the new era that is dawning in November.

Final Verdict: 7.5 – “Extermination” #2 continues to highlight a fast-paced event with meaningful impacts to a large number of characters, always portrayed in a free-flowing art style. Now that the explanations are out of the way, the rest of the story can really kick it in overdrive. Readers should be excited for what comes next!