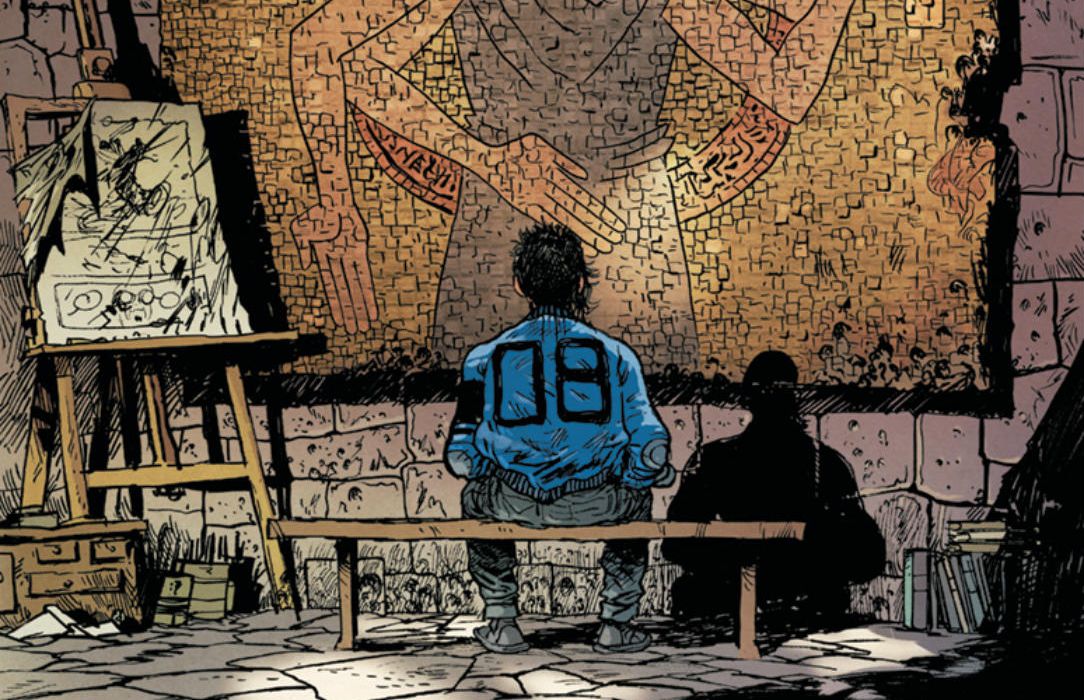 After making it onto many Best of 2017 lists, Daniel Warren Johnson continues his winning streak with the tenth issue of “Extremity.” The endless war of Roto and Paznina marches on, but a secret weapon may turn the tide. The endgame is approaching: Jerome and the Roto Clan go on the offensive but crash-land on the Paznina capital. Thea and Rollo are taken to the Hall of Dust to ponder the past. Shiloh’s true purpose is revealed. 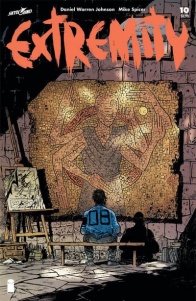 Issue #10 is mostly setup for the final two issues, though “Extremity” sacrifices none of its stellar action sequences and engaging character work. Jerome remains resolute in his mission to utterly destroy the Paznina, fully aware that his actions will result in his own demise—and likely his countless tribesman. The SHUNK! of putting on his iconic teeth and tusk mask seals Jerome’s fate as the monster he’s become. Meanwhile, Meshiba guides Thea, Rollo, and Shiloh into the Hall of Dust, an enormous Essene archive. Thea encounters mounds of her past sketchbooks and drawings within the Hall. This is an important moment for Thea and touches upon the prominent themes of “Extremity.” It’s as Meshiba says: “We keep these to remind ourselves that creating is better than destroying.” We see what Thea has lost, all documented on a sea of paper. We see Jerome’s atrocities, recorded more recently with Thea’s left hand. Her path is clear now. The darkness has already swallowed Jerome but Thea has the chance to embrace her gift of creation rather than her father’s destruction—but first she must confront her father.

Thea of the Roto Plains, the artist, is the true heart and soul of “Extremity.” She is every artist’s dream-crushing nightmare come true—how do you live your life when your one tool of creation is taken away from you? Johnson pours himself over this work, even taking a method-style approach to drawing Thea’s post-injury sketches with his left hand (he’s a righty). Narratively, issue #10 is the perfect point to remind readers of Thea’s passion and gift in the Hall of Dust. Descending into the Hall is akin to the “apotheosis” of Joseph Campbell’s Hero’s Journey. Now armed with further understanding, Thea is ready to rise again and right the wrongs of her of tribe.

Johnson has drawn visually arresting vistas throughout his series’ run: Amitta City, the Essene, and now the Hall of Dust. This underground archive is part museum and part library with dusty tomes and mosaics inspired by ancient Byzantine art. Nearly two full splash pages are dedicated to the Hall, a castle-like amalgam of masonry and machinery. Earthy tones and warm lights contribute to the timeworn ambience. When the crew enters the library, Johnson chooses to eliminate the right and left panel borders, giving the impression that these bookshelves continue indefinitely. Five small panels of Thea’s sketchings bisect another page, perhaps indicating that this is a crossroads, and the mere sight of these drawings will change her path forward. Panel choices like these meld storytelling and the unique properties of the comics medium to great effect.

Action scenes are drawn with equal care and deliberation. When the clans’ warring ships fly and crash, ink lines are distorted and blurred, taking on the structure of wavelengths—a subtle indication of the speed and impact of these metal leviathans. The Paznina Queen and her soldiers are bathed in their clan color’s green glow, so characters and action are more easily distinguishable. Each action panel whirs with speed lines—they encompass attacking ships and fleeing characters. Pages come alive with motion.

A comic so laden with sound effects requires a letterer up to the task. Wooton’s lettering (and Johnson’s usage of SFX in the script) adds a dimension of sound that aspires to transcend the silent experience of reading a comic book. Sound effects are used liberally from the small flip flip of turning pages to the high-decibel CRUNK of colliding metal. Bioengineered muscle monstrously expands with a SHRIP!. BWOAH, KRAKT, FRUNK, CRASH: Wooton plays the comic book equivalent of audio engineer with dynamic SFX, ensuring “Extremity” is the closest to an auditory experience one can have in comics without any actual sound.

The future doesn’t arise out of a vacuum. It’s informed by the past. Sometimes you embrace it; other times it embraces you. The past can create you or destroy you. Destiny cares not what you want. You can look directly at your past and not recognize what’s there—as the case with Shiloh—and all it takes is the push of a button by someone unseen to claim you once more, erasing your lofty attempts at change. You can succumb to memories of pain, allow revenge to corrupt your soul, and ignore the devastation you wreak—as Jerome does when the monstrous mask he wears becomes his true face. Or you can look at your past on pieces of paper, artistic action borne out of love and creation, and decide to ignore your cultural warpath—which is what Thea wants to do but can’t. She must first stop her father and put an end to the cycle of violence.