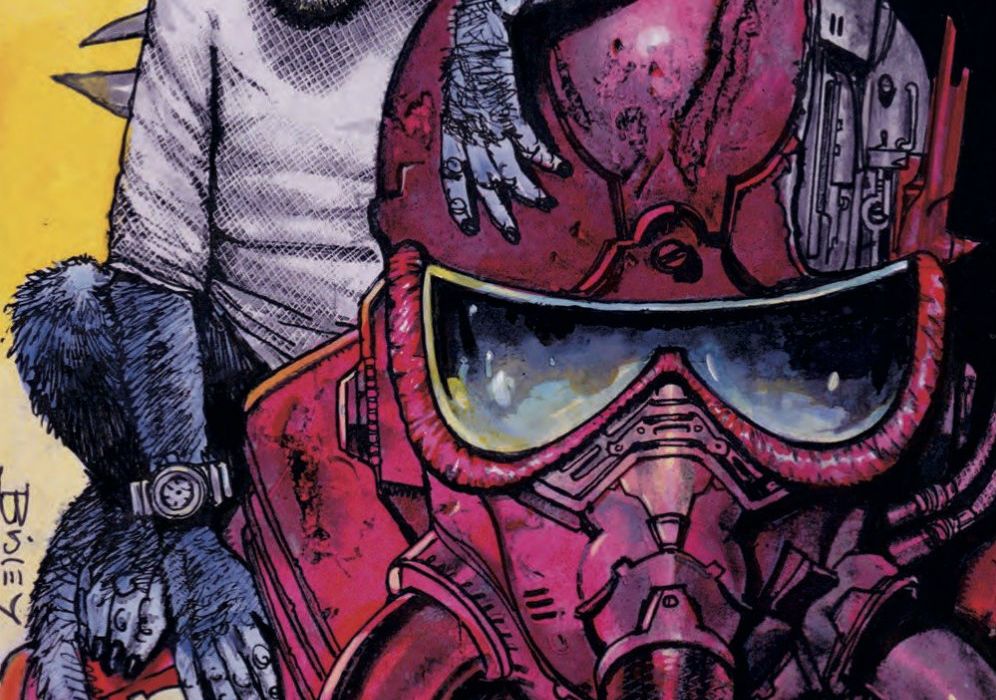 Yacine “Elgo” Elghorri, a frequent collaborator of some of the medium’s giants like Alejandro Jodorowsky and Moebius, brings his own worlds to life in his 2006-2009 comic “Factory.” The series is being translated by Marc Bourbon-Crook for Statix Press, so we’re seeing some of this expansive mind’s talent in English for the first time. Does it hold up and translate as well today as it did over a decade ago? 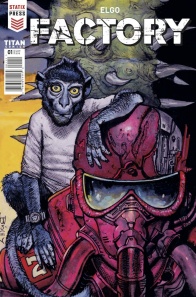 Written and Illustrated by Elgo
Translated by Marc Bourbon-Crook

Mad Max meets Fallout in the nightmarish vision of life on a dystopian planet!

A band of mutants slog through the harsh deserts of a dystopian planet in search of the Factory – The last semblance of civilization left among the wasteland.

From the moment you open this text, you’ll see it’s not a particularly forgiving one. Elgo throws you right into the thick of dense worldbuilding, with the first page displaying a mutant precognitive test-tube baby mutating further and bursting out of his ‘foetocube’ and preaching a last ditch forecast about an oncoming ‘pigman’. If you found yourself lost and confused in reading that sentence, it doesn’t get much easier going further in. However, therein lies the fun. Elgo ensures that you get swept up in a wave of carefully constructed and otherworldly narrative, and sees that you ride it out to the bleeding edge. From experiencing the literal factory setting in the first section, to watching a mad twin get crushed by a living tree in the desert wasteland, Elgo doesn’t compromise on the high-concept sci-fi weirdness, which makes for a fascinating story unlike many others.

And therein lies what makes this comic so distinctive. In many other debut comic issues, creators might try to ease you in to the experience by just revealing a mere few characters or ideals. Elgo disregards this completely and flashes by every seemingly important facet of the story in this first issue. It’s a little dizzying, but it does reward patience and rereading by containing a lot of depth. Elgo introduces you to the “Factory” world by us how they react to a crisis, with their lead ‘precog’ passing away. We see the Lord Gucco reacting desperately to not being able to foretell any problems they might have in the future, especially considering that there’s a federal ‘Food Corp’ inspector coming to check on the place. It reveals a deeper analogue to real world fast food and business corporations and the poor working practices that can take place underneath the flashy advertisement. On top of this, we have the Factory as being a sole supply of food to the derelict population surrounding it, implying that a possible apocalyptic situation happened in the past to cause this world but never directly referring to it. It’s complex, layered storytelling that invites readers to question why it is all happening, but without taking away from the main narrative.

I do have a few issues with this method of structuring, however. Since we’re introduced to so many ideas and characters in this issue, there doesn’t seem to be a concrete protagonist or leading voice to cling onto throughout the story. Elgo seems to imply that the man-pig Raul might have the protagonist role, but his identity is only lightly touched on, his voice isn’t really established and he doesn’t seem to have a clear drive or motivation. Then there’s the enigmatic food inspector (or a guy who seems to’ take on that role) who pops up without dialogue, but with a big show of psychic power. It’s flashy and intriguing but Elgo doesn’t really shed light on his role in the story either, other than to presumably ‘inspect’ the Factory. It’s not a huge problem if you are in this for the art or world-building, but it just makes the story a little easier to digest with characters a little more substantial and defined.

Having said that, Elgo’s art is a real treat here. In the tradition of other great European artists like Moebius or Zoran Janejtov, Elgo builds a grimy, industrial yet eerily beautiful aesthetic for his “Factory” world. The book feels dusty and arid like “Mad Max” yet with the dark machinery of something like “Dune.” Elgo has developed a look here that because of these reasons feels familiar, yet due to his hyper rendered art style and crazy narrative concepts it feels original. But contrary to a lot of these European artists Elgo takes inspiration from, the environments and settings here aren’t overly complicated and packed with content. In a lot of pages, Elgo relies more on negative space and hard colors to create a kind of depressing abyss. Every time we see a shot of the inspector, it’s done with him wandering through a vast and mostly empty desert, implying loss of civilization and themes of exile. Similarly, the walls of the Factory itself aren’t filled with advertising or other cyberpunk-styles signatures, but menacingly clean. It’s dark sci-fi that evokes a certain desolation when reading it, but a wonder to witness more of this despairing world.

Elgo’s characters are quite unlike anything else in western comics. You won’t find much resembling an average human being here. The denizens of the factory are all either mutants, overweight workers in bodysuits or disembodied heads with long, chicken-like machine legs. Even the starving populace are rendered quite carelessly, with most of them being pupil-less, diseased or disproportionate. This lack of anything familiar gives it a true sci-fi feel – that this story is something we would never witness in our own world, with people that look quite inhuman. Contrasting this, however, and stoking the fire of reader speculation and intrigue, Elgo does draw the food inspector as the closest thing to an average human being. It’s use of art direction to support the narrative, making the readers think: does the inspector come from a part of the world more hospitable than this? Is he simply a rare case? Whatever the case is, Elgo makes such a deal out of drawing everyone else differently that it inspires creative thought in the readers, which is exactly what you want to achieve in your art.

Elgo’s coloring and use of consistent palette is something that I’m a little on the fence about. It might be more of a case of context, considering that this was drawn over ten years ago, but Elgo keeps a pretty consistent theme of dull reds, browns and yellows throughout to firmly remind you that this is post-apocalyptic. It does work for some of the more stark and impassionate scenes, however. When we see the shot of the derelict population crowded together yearning for food, it’s done with a range and clutter of this palette that reminds us of our own realities third-world struggles. It’s evocative and emotive when used in cases like these. However, in the rest of the book, it feels a little lacklustre, especially in cases of grand splash pages and intricate artwork. The shot of the outer architecture of the Factory early on feels like it could have been impressive with diversified coloring, but instead Elgo coats it in a stark red that makes it blend in with the rest of the pages a little too well.

“Factory” #1 is not a comic for everyone. It’s dizzying, layered, dense, gruesome and gritty, ramping up the tradition of European sci-fi comics. Underneath that, however, it’s a comic that rewards attention. Behind every creative decision, there’s a real-world analogue. There’s a design choice that might impact the narrative in the future. There’s tonnes for the reader to unpack and delve into for just one debut issue. It may not have a clear narrative or character focus, but “Factory” #1 is a richly layered debut, and I’m glad it’s finally reached out shores.