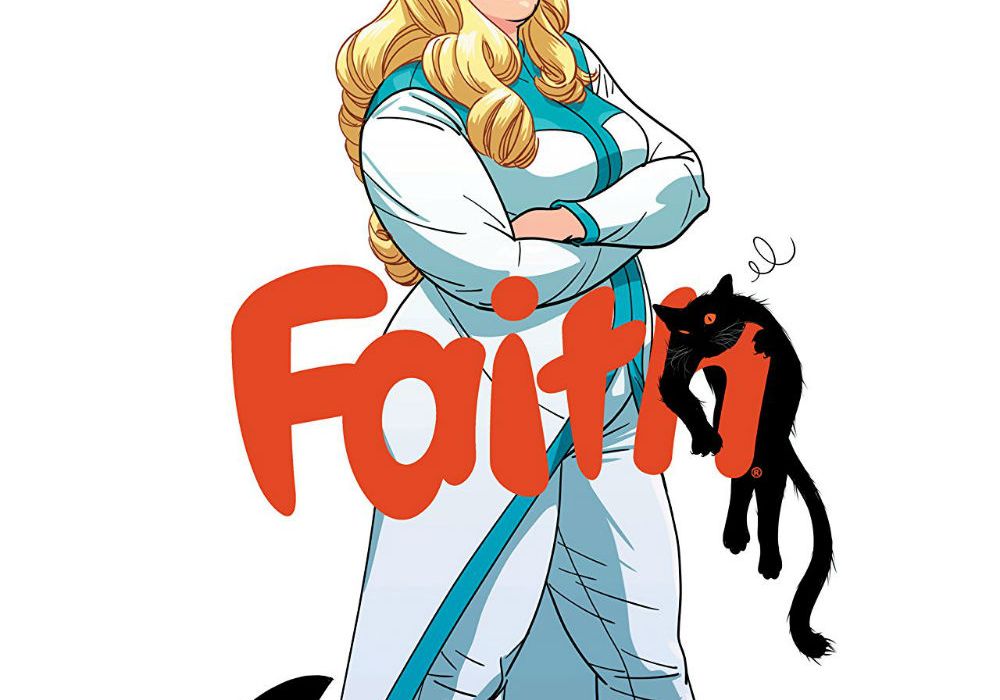 Held captive by the Faithless, it’s not looking too good for Faith … until someone gives Dark Star the champagne. 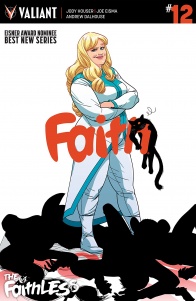 Cover by Kano
Written by Jody Houser
Illustrated by Joe Eisma
Colored by Andrew Dalhouse
Lettered by Dave Sharpe
Cover by Kano
Faith vs. “THE FAITHLESS” – The final battle!
Framed for a crime, held prisoner by a team of her greatest enemies, and quickly running out of time, Faith must confront the truth of her first true defeat! But has victory truly come to The Faithless – a revenge-obsessed squad of malicious malcontents – or will Los Angeles’ soaring protector give them a run for their money first?
From the Hollywood Hills to the Santa Monica Pier, L.A. is about to witness the ultimate beat-down between good and evil…and when the final page arrives, you’ll be saying, “What the frack?!”

Something amazing happens in “Faith” #12, the finale to writer Jody Houser’s series before continuing to write the character in the “Faith and the Future Force” miniseries beginning in August. Instead of the expected final fight showdown between the heroine and her legion of detractors splattering across the greater Los Angeles area, Houser writes the issue as a bottle issue. It’s all in the house and while there is fighting, it isn’t the kind you would expect. This subversion is much appreciated as it offers new ground for how to end these sorts of things. I saw Wonder Woman last week, twice, and while the third act by appearances follows the expected template my favorite part wasn’t the whiz bang weightless CGI spectacle. It was the meeting of the minds between hero and antagonist. Here we have a whole issue around that concept and its execution is spectacular.

Houser’s chamber piece of a finale plays to the strengths of Faith Herbert’s character. She isn’t a fighter, she’s someone who saves people. And even imprisoned by her greatest, or at least most persistent, enemies she’s still trying to save them. Is it any wonder than that artist Joe Eisma constantly draws Faith with a halo effect around her?

Now just because this finale isn’t a climatic, action packed, exercise in rock’em sock’em robots, doesn’t mean the art team put in a perfunctory effort. Quite the contrary, Joe Eisma, Andrew Dalhouse, and Dave Sharpe play key roles in realizing this character driven finale. While Houser’s dialog and script is centrally located in this issues chain of being, its representation isn’t fully up to her control. That representation, pacing and pictographic context, around her dialog is up to the art team. Together the creative team Voltrons it up giving these scenes a real sense of rhythm and flow.

Without a lot of action, there isn’t much reason to go big. The biggest panel in this issue is a standard 1/3-page horizontal rectangle, most often used to accommodate a full cast view at medium length. Otherwise the pages and panels are your typical box construction, allowing for effective close ups, as well as, high/low angle full body representation. This sort of paneling is what you’d want for dialog driven sequences, allowing for medium views of the speaking character with plenty of room for emotion and dialog. Eisma dose a fantastic job representing Sidney Pierce’s vapidity at several points. This is also the kind of paneling, that besides this issue largely being a chamber piece, doesn’t require extensive background art which often means Andrew Dalhous accompanies Eisma’s figures with an emotive pastel to further sell the panels emotion. If the aesthetic wasn’t so soft, it’d be right at home in classic melodramatic male driven anime.
This dialog driven panel structure is the foundation to the creative team building these sequences with a sense of rhythm and emotive change. While never perfect grids, the paneling is condensed together allowing for Eisma to represent a range of emotions quickly and reinforce how Dave Sharpe’s lettering creates a cadence for the reader. Take for example this bit of dialog by Faith after she learns her Legion of Doom’s nom de plume is The Faithless (represented by Sharpe with the Faithless logo).

Now reading that you are likely to get an idea of the cadence, punctuated by a long pause brought about by the ellipse and shorter one due to the comma. To further emphasize that beat, between befuddlement and appreciation, Shapre literally represents that pause by breaking that line of dialog into two seperate, but connected, speech balloons. Eisma for his part gives Faith a somewhat contemplative expression as she works through this new information.
The ability to show emotive change is found in the proceeding panel, which is emotionally the opposite for Faith. Faith is over her nerdish appreciation of good branding and down to business, which means it’s serious face time! These two long vertical panels also make something of a ‘V’ in the negative space between the two of them, further representing the emotional distance traveled in these two panels. Sharpe also dose the same move again by representing the elliptic beat with separate dialog balloons.

This is the type of stuff that people mean whenever they describe something as having “good” writing or dialog. It’s not so much what is written, but how it is delivered. Aaron Sorkin writes the same basic pattern and phrases into all of his stuff, but because the actors make it sound cool everyone praises it. By building a multilayered context and representation around Houser’s dialog they make it “sound” cool. I defy you to read this issue (or any of the preceding ones) in a manner that doesn’t naturally resemble a screwball comedy.

Houser and company pull off an interesting magic trick with this issue: on its face this is an unsatisfying, inconclusive ending, and yet it works. This is the kind of ending that would make for a solid season finale and terrible series finale. While this is technically the end to this run of “Faith” nothing about this is conclusive. The conspiracy by the Faithless is only partially defeated, but there is still room for more stories of Faith’s adventures in Hollywood be told. It makes ample room for a “Superboy and the Legion of Superheroes” style adventure to naturally fit in. While Faith’s reflexive potential certainly gives Houser greater leeway to lampshade and play with superhero narrative tropes, the largely upbeat ending feels true to the lead’s indefatigable desire to do good. Which is exactly what you’d want out such a character driven book.

Final Verdict: 8.0 – Houser and Co. finish “Faith” on a very strong note with more adventures coming right around the corner.