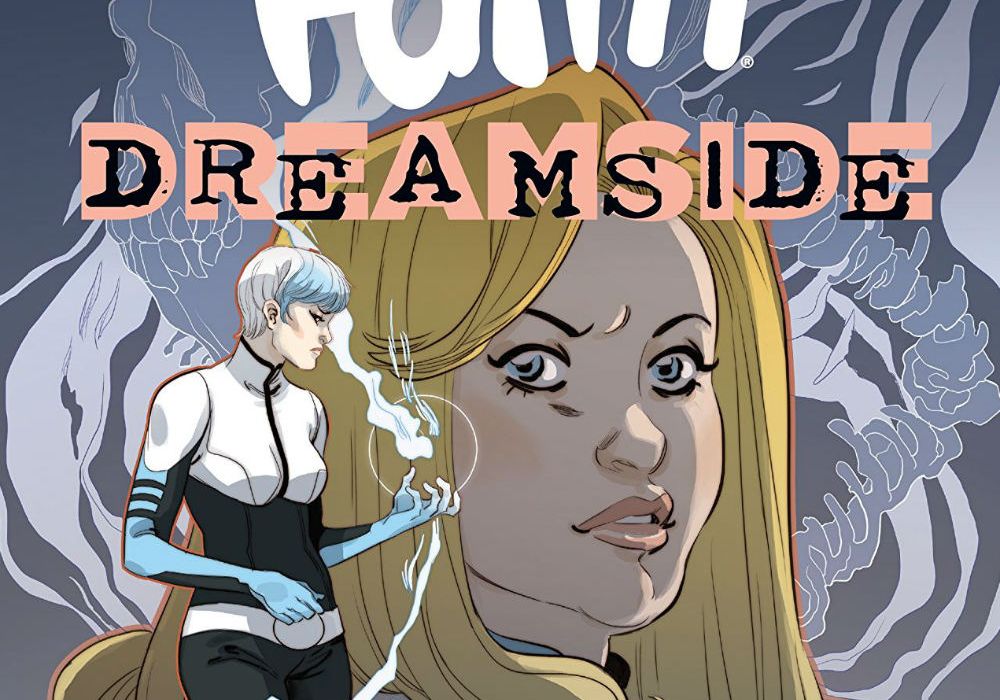 “Faith: Dreamside” #1 asks the real important question: What do you do with a Kaiju in LA? 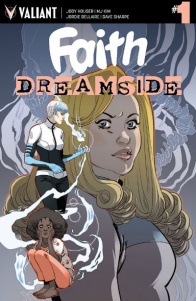 Even before Faith Herbert, AKA Zephyr, gained the power of flight, joined the Harbinger Renegades, and soared through the skies of the Valiant Universe, deep down she was always a hero at heart. But what’s a hero to do in the face of a foe that exists only in nightmares? Face them head-on, of course! To protect the dreams of her teammate, Animalia, Faith must venture into a fantastical new realm the likes of which we’ve never seen…and she’ll need some help from the world’s premiere parapsychologist, Dr. Mirage, to make it back with her subconscious mind still intact!

This fall, uncover the secrets of the Dreamside as writer extraordinaire Jody Houser (FAITH, Star Wars: Thrawn) and rising star MJ Kim (FAITH’S WINTER WONDERLAND SPECIAL #1) continue the adventures of the high-flying icon that Uproxx calls “A joy to read!”

While I was at WonderCon this year I briefly made small talk with writer Jody Houser, and shouted out her work on “Faith.” I half-jokingly pleaded to make sure Valiant didn’t do something stupid and kill Faith. It sounds funny in hindsight, but “Harbinger Wars 2” was looming in the distance and the buyout DMG had recently gone through. She laughed and thought they wouldn’t do something like that and mentioned they had been talking about a new Faith project; which one can assume is this “Dreamside” miniseries. The charm of Faith Herbert’s continuing adventures is built on what she brings to the Valiant U, both emotionally and stylistically, compared to her monstrous military industrial complex birthed contemporaries. She is a fangirl, and unlike Deadpool this self-awareness doesn’t bring with it ironic piss takes, which results in an incredibly earnest narrative – something you don’t see much of in cape comics in general. All of these qualities of Faith are present in the first issue of “Faith: Dreamside” which makes for an overall solid introductory issue to the character and series as a whole.

The main “Faith” series ended last year with an arc called ‘The Faithless.’ There has been a time travel themed miniseries and holiday one shot in the interim. Emotionally this miniseries is a direct continuation from the events of ‘The Faithless,’ as our hero deals with the effects of being framed for murder by ones super villains. The first issue doesn’t make clear if this takes place pre or post “Harbingers Wars 2,” and can be read either way. Despite being a series that has some baggage to it, writer Jody Houser and artist MJ Kim use this issue to show the core of who Faith Herbert is. If Kim’s framing an early sequence like it was straight out of Richard Donner’s Superman: The Movie wasn’t clear enough. Houser and Kim use the plot to show Faith’s powerset in some novel ways, that also clarify the concept of her companion field in ways I never really thought about. Functionally much of the emotional and narrative context is developed through internal monologue that largely succeeds. An early sequence that features Faith wrestling with herself about potentially shirking her great powers and responsibilities set against a montage of art by Kim or game planning out how to deal with the LAPD, are effective and efficient usage of internal monologue. The creative team only misstep a bit when the words and pictures are more literally linked, and all that was needed to get the emotional point of across was MJ Kim’s art.

MJ Kim’s art is in that expressive Marguerite Sauvage, manga inspired realm. It works like gangbusters for “Dreamside.” Kim shows some stylistic variety throughout the issue. Early on, while Faith is in her civilian identity of Summer Smith, Kim and colorist Jordie Bellaire do a good job of mimicking the style set by previous artists Joe Eisma and Andrew Dalhouse. It is a nice stylistic touch that represents Faith’s multiple identities. The art is overall consistent so that it does not read out of place after Faith rips off her wig Superman style. The Summer Smith pages feature more definite outlines for figures and Bellaire colors with a bit more realism and value. Once the book is in Faith mode, things become more expressive, Kim uses black outlines sparingly to create highlights and contrast as Bellaire colors in everything buttery smooth.

Faith helps people, almost to a detriment. When she finds a friend in need, she can’t turn them down. Even if that person initiated a kaiju attack on L.A. as part of a broader plot to kidnap her to obtain assistance. Monica Jim aka Animalia never was one for subtly though. Monica Jim is in need of help dealing with ghosts, both literally and emotionally, and thinks Faith is the only person who can help her bust them. Houser and Kim do an excellent job of showing their differences and relationship in a few brief pages. Due to her upbringing, Monica Jim isn’t one for trusting people, groups, or asking for help. A characteristic that Kim cleanly illustrates in their interactions, when Jim is the on talking or otherwise dominate she is shown to be artistically disconnected from Faith. Faith is the antithesis of that mode, and when she’s in charge is shown to be in close proximity to Monica Jim. It’s a subtle choice that cleanly sets up their arc for the series going forward.

If there is one place “Dreamside” #1 falls a bit short on it’s plot movement, which is an idea I’m somewhat torn on. “Faith: Dreamside” #1 as a (re)introduction to Faith Herbert is highly effective in efficiently dramatizing the core of her character. However, the general nagging feeling I have with the knowledge that this is a four issue miniseries makes me want for more direct movement on getting Faith, Monica Jim, and Doctor Mirage together for their titular adventure in the Dreamside like the solicit says. Valiant arcs and publishes things in 4 issue chunks, and it often leaves me wishing these stories had an extra 10-15 pages to smooth things out as page budgets run low. While the plot of this issue may not be what one expects, as a text that dramatize the character of two thirds of this series trio it more than succeeds.

Final Verdict: 7.5 – Faith is back with the start of another great adventure, in an issue that makes a strong introduction to the title character.