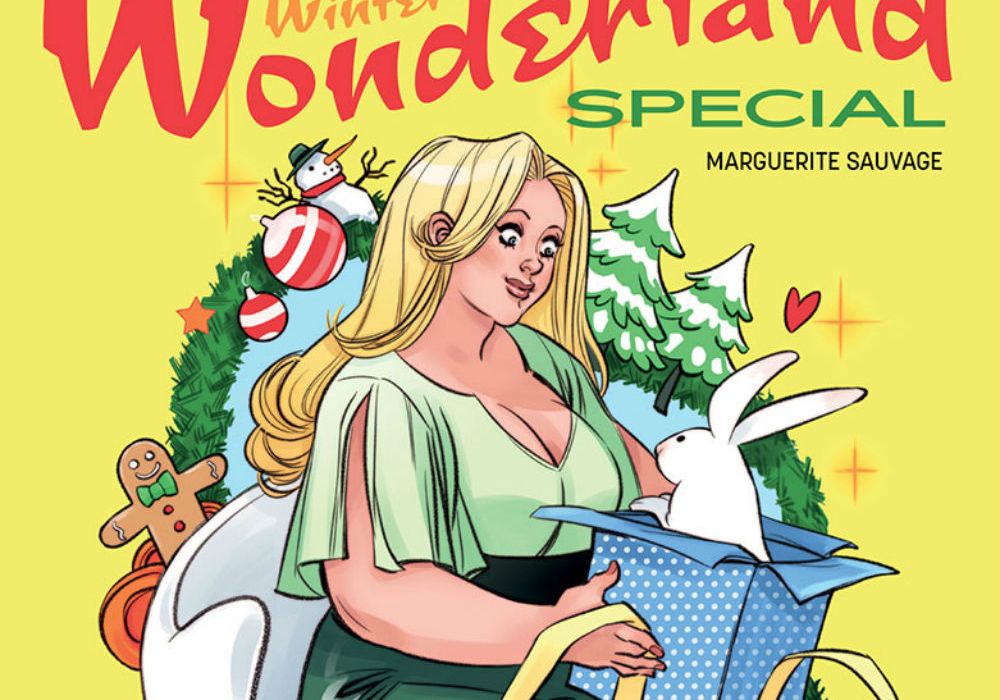 Faith has returned just in time for the holiday season, however, this time not with traditional series author Jody Houser. “Faith’s Winder Wonderland Special” #1 is written by former “Faith” artist Marguerite Sauvage with art duties from the traditional series artist Francis Portela and MJ Kim. The story makes a debut just in time for the holiday season and is a special one-shot starring the beloved Valiant hero. The solicitation for the book teases a psychedelic edge and narrative elements from “Alice in Wonderland” that seem to be fairly overt. Can this entry into the ongoing series meld new ideas with the familiar backdrop of Faith’s solo ongoing superhero adventures? 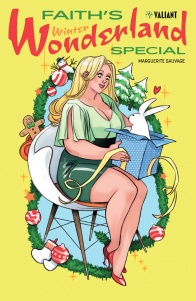 As cheer fills the air, Faith “Zephyr” Herbert is about to take a trip down the rabbit hole… and into a mind-bending winter wonderland where every day is something special! But hiding behind the tinsel, all is not what it seems… White rabbit meets red-nosed reindeer as Faith squares off against a realm of make-believe and merriment for a whimsical flight of superhero fancy!

“Faith’s Winter Wonderland Special” kicks off with a white rabbit inspired going to Faith for help, this trick adds some immediate tension to the plot from Sauvage as the pace gets broken up and readers catch up with Faith’s everyday life. The one-shot is small in scope and features a traditional structure making this comic feel at home with the remaining “Faith” issues. Faith watches a special on television and gets nostalgic about the period of her life and starts to poke around before finding a supernaturally influenced world. Each element of the plot ties back together and gets a strong injection of ‘Holiday Cheer’ in the last couple of pages. While this installment in the title does end up feeling inconsequential, the pacing and structure of the narrative are well tuned and a smaller side-story taking on a Holiday theme has a certain novelty to it.

Valiant’s editorial team has broken up the comic between Portela and Kim. The series smartly carries a more traditional look when Portela is drawing the everyday life of Faith Herbert. Portela’s art continues to carry a slick and clean direction while giving Faith and the cast of the title plenty of facial expressions along the way. While Portela only gets to draw a small portion of the fantasy sequence seen at the beginning of the story, the debut teases a great visual element for the book. The sequences towards the beginning contain a high amount of detail and even references to other movies and films.

AJ Kim’s surreal artwork brings a different tone to Faith adding variety to the comic. Lewis Caroll-inspired elements depicted by Kim bring needed visual diversity to the issue which Andrew Dalhouse adds to the colors to the strange environments Faith encounters. Kim fills the contents of the pages with creepy kids, surreal monsters, and talking animals. Kim takes strong risks with the innovative page layouts and spreads that she brings to the comic–one such panel had an interesting mix of a sludge monster makes and Faith’s nervous reaction to the being.

At the heart of the book, there’s a story about Faith’s encounter with a television show which goes over nicely but could have matched the stakes seen in the supernatural elements. The end of the book has a swift, much-to-clean resolution that doesn’t give the issue a satisfying conclusion. This more personal plot thread helps the comic retain the all-ages content rating but doesn’t give readers something significant to think about upon the closing the comic. The fairytale plot thread also had an expedient conclusion that did not give me the sense that the thread was closed out given the grand introduction.

Thankfully, the content here can be enjoyed on a couple different levels and interpreting the special as a charming Christmas tale rather than an introspective character analysis make this a stronger overall reading experience. Valiant smartly doesn’t tie the story to one specific holiday.

“Faith’s Winter Wonderland Special” #1 is a charming installment of the series and a great idea for a new way to bring Faith’s individual stories back into the Valiant Universe for a limited amount of time. The title should please traditional readers of the book looking for an installment of the comic carries the same tone and visual consistency. The darker supernatural aspects of the issue also bring out a different side to the ongoing that has been previously. Aside from a brief and disappointing finish closing the issue out, this is an enjoyable one-shot which should also serve as a great way to introduce Faith Herbert to new readers.