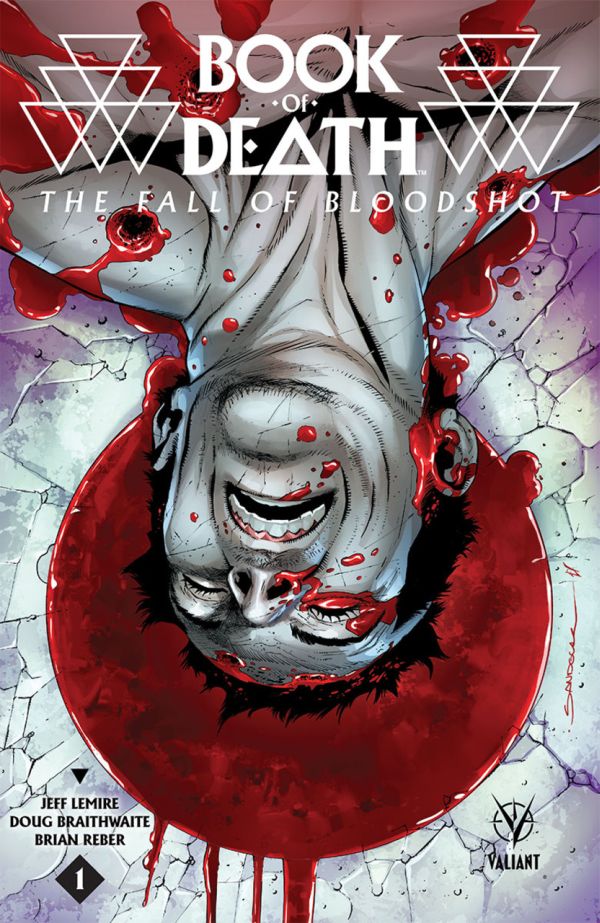 As Gilad and Tama are on the run in the event’s main book, we get a stand-alone look into the future of the super soldier, Bloodshot. 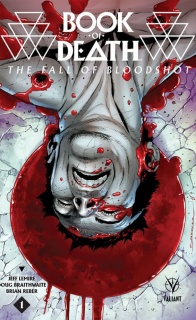 Superstar creators Jeff Lemire (BLOODSHOT REBORN) and Doug Braithwaite (IMPERIUM) chronicle Bloodshot’s ultimate fate in a visionary tale of present and future torn from the
pages of BOOK OF DEATH!

The lovers he’s known, the allies he’s trusted… All will eventually return to dust… But will the nanites that transformed Bloodshot – body, mind and soul – ever let him truly rest? For the very first time, read an essential chapter of the Book of the Geomancer as Project Rising Spirit’s ultimate walking weapon soldiers on from the modern day into the far future of the Valiant Universe…and reveals the truth behind the very last Bloodshot story that will ever come to pass…

Superhero universes have a big problem with committing to change and regression. As a child of the nineties and the aughts, it is frustrating when we see characters “end” and new characters take their place only for things to revert back. I can understand why it’s done. Doesn’t change that I find it cowardly at best.

I say this because Valiant has shown the guts to actually implement big changes with no sign of going back on them. They’re still an infant universe but with events like “Death of a Renegade” and “Armor Hunters”, they’re showing willingness to move forward. “Book of Death” is going to show the bridging of the modern world with the future of the 41st century depicted in “Rai”. Jeff Lemire, Doug Braithwaite and Brian Reber take a more focused look in the future with Bloodshot. Does it work?

Yes. The team does a very good job of telling us about Bloodshot’s future and inevitable death. Tells. Tells.

That is probably the greatest fault with “The Fall of Bloodshot”: It reads like a biography. Now, while there is nothing wrong with that (and as someone who absolutely loves world building, I can appreciate the events depicted), it isn’t until the last event of the issue where there is time allowed to breathe and have emotional resonance. We get an event for a page or two, then onto the next. Then the next and so on, only thing providing context and potential emotional resonance is Bloodshot’s internal monologue. I can appreciate the attempts, but it’s not until the ending that I really felt for Bloodshot.

It makes me question just how are these special “Fall of” one-shots going to play out over the next three months. I can understand in the main book the events of the future being narrated to us; it’s Tama literally reading from the Book of the Geomancer. Here though… I would have rather the final scene of this book be expanded upon a bit more. Have the one-shot be about the last event in Bloodshot’s life with some allusions to his adventures.

But I’m not going to be a massive jerk and dismiss the events depicted through the majority of this book. Like I said, I love world building and future world building like this. Valiant fans of old will probably recognize some events and concepts such as the Psi-Lords and Rampage and the concept of Captain Red-Eyes with his First Mate Armstrong is absolutely hilarious to me. Lemire and Braithwaite do show how the passage of time doesn’t necessarily mean it’s a technological straight line to the world of “Rai” (considering all the superpowered people running about, wouldn’t shock me if there was an Apocalypse or two in between).

The art team of Doug Braithwaite and Brian Reber, fresh from “Imperium”, continue to be a fantastic team. Right off the bat these two sell the loneliness behind the character; with a four-panel widescreen page of Bloodshot walking towards the reader in a quiet forest, with the final panel being a close up of the tired soldier’s face.

I think Brian Reber has become my favorite colorist that works at Valiant. Between his work here, “Imperium” and the first arc of “Ivar, Timewalker”, the man has shown that he is very capable of using his color palettes to set a variety of tone. Instead of the fun adventure in “Timewalker” or the poli-philosophical “Imperium”, this one has a much more sombre tone, emphasized by the metaphorical/literal sunset near the beginning. It is a slightly jarring transition when the scenes, and colors, become more vibrant and adventurous in the “Captain Redeyes” and the “Robot Wars” sequences, but Reber still makes the sequence exciting.

But it is the finale sequence that does serve as the best part of this issue, where the entire creative team are in absolute synch. And yes, not a spoiler at all, Bloodshot does die, emphasized by “The End” credits. It is a sad, sober affair of an absolutely broken and tired Bloodshot, countless centuries (millennia?) in the future as his nanities work no more. In spite of the techno neon of the future, it still feels dark. But that doesn’t mean it isn’t comforting. This is a man that had no peace. Barely any respite for countless years. To see him meet his way in such an unexpected way is comforting, and a testament to the skill of Lemire, Braithwaite and Reber.

Honesty, Bloodshot was not a character I felt there was much depth to. Jeff Lemire’s writing on “Bloodshot Reborn” has shown me that I was wrong and this one-shot helped solidify that. It does, however, make me curious as to how much this will resonate with someone just coming off the street and spots the cover. This is what I fear with the rest of these “Fall Of” one-shots, that to the layman it will mean little. But as someone who does know what Bloodshot is, and has followed his recent series, it does its job well.

Final Verdict: 7.0- Despite feeling a bit too much future lore with not as much emotional resonance, Lemire, Braithwaite and Reber manage to make the true ending of Bloodshot an unexpected by heartfelt one.