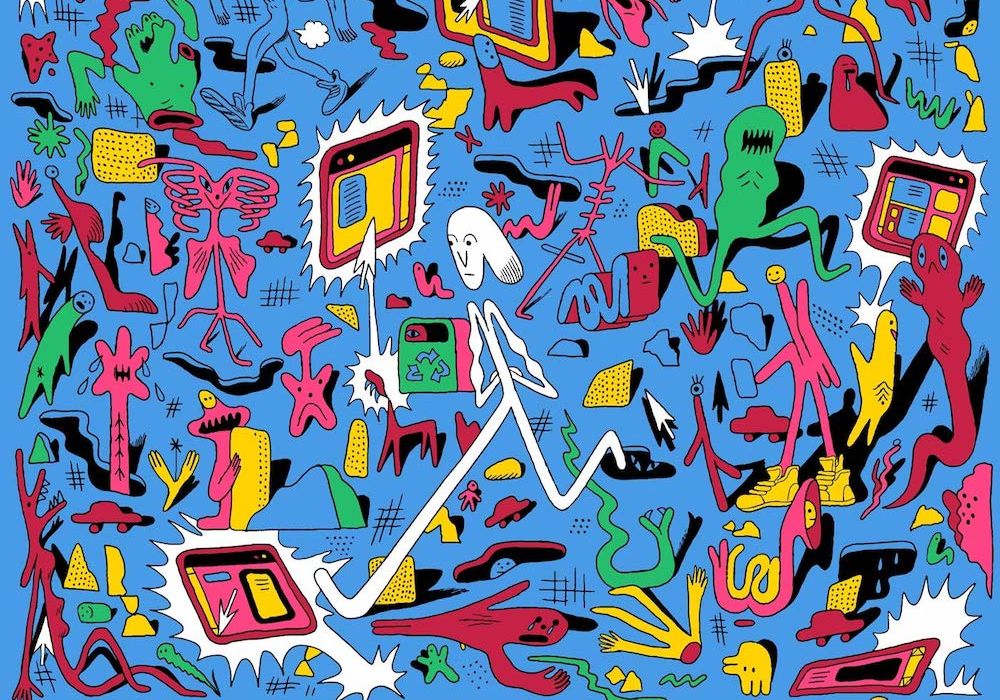 Michael Deforge’s newest work, the hardcover OGN “Familiar Face” out now from Drawn & Quarterly, is a tremendous gift, and a read that hits particularly well given the current state of the world at large. Deforge, no stranger to critiquing society (his “Ant Colony” a scathing and darkly existential notable example), returns with another look at human interactions. Does this book maintain the author’s dark humor, surreal visuals, and often bleak outlook? Keep reading and let’s take a look! 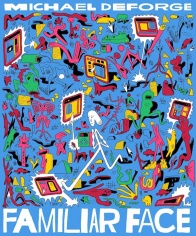 In a thoroughly modernized, constantly updating society, where can true connection be found?

The bodies of citizens and the infrastructure surrounding them is constantly updating. People can’t recognize themselves in old pictures, and they wake up in apartments of completely different sizes and shapes. Commuter routes radically differ day to day. The citizens struggle with adaptability as updates happen too quickly, and the changes are far too radical to be intuitive. There is no way to resist―the updates are enacted by a nameless, faceless force.

The narrator of Familiar Face works in the government’s department of complaints, reading through citizens’ reports of the issues they’ve had with the system updates. The job isn’t to fix anything but rather to be the sole human sounding board, a comfort in a system so decidedly impersonal. These complaints aren’t mere bug reports―they can be anything: existential, petty, just plain heartbreaking.

Michael DeForge’s ability to find the humanity and emotional truth within the outlandish bureaucracy of everyday life is unparalleled. The signatures of his work―a vibrant color palette, surreal designs, and a self-aware sense of humor―enliven an often bleak technocratic future. Familiar Face is a masterful and deeply funny exploration of how we define our sense of self, and how we cope when so much of life is out of our control.

Perhaps interestingly enough, while reading Canadian Deforge’s newest work, I was reminded of a particularly unsettling episode of the podcast Radiolab, “Post No Evil.” One segment featured a former employee of Facebook whose job was as “content moderator,” sifting through page after page of flagged content to deem whether or not the page/article/photo etc. met “community guidelines.” This process is now largely automated, but what these employees were, at the time, exposed to was the literal worst that humanity has to offer. For eight hours a day, and roughly 5000 images per day- beheadings, explosions, pedophilia, and other acts of the more unspeakable aspects of human nature, quickly adjudicating. Pass. Fail. Fail. Fail. Fail. The employees would then have to clock out, go home, and try to lead normal lives, but would, in fact, be suffering from a form of PTSD (post traumatic stress disorder). I am reminded of this bit because the unnamed protagonist of the book works in a very similar job- one that you think could be automated – perhaps should be – and yet isn’t. A job where the employer can technically say the service was handled by a human to give the complainant some comfort- a cynical job for a very cynical age. What Michael Deforge has crafted with “Familiar Face” is a sad, angry, and subtly sweet message to all of us trapped in either gig economy work or just the trappings of modern society. The message being, despite what you think, despite how you might often feel: YOU ARE NOT ALONE. Now, maybe more than ever, this is a message we need to hear.

Art is the creation of something in order to understand, or be understood. Many times, as it is with “Familiar Face,” it is both, as Deforge interweaves the main narrative of our female protagonist with that of the lives of the people she briefly connects with at her job. Our hero acts as narrator, lost in a world of “optimization,” where our technology, bodies, homes, and cities are subject to seemingly random and unknowable updates. “But optimized how?” seems to be the main question, as updates to the narrator’s physical form borders on abstraction, her apartment moves to a new neighborhood overnight and without warning, her girlfriend disappearing as well, in the process. So too, does her city seem amorphous and mysterious, with updates to the highways veering right into cartoon-like black holes, its travelers never to be seen or heard from again. Her job working for the “Complaints Department” of a major company, largely consists of reviewing a complaint (not responding or addressing, mind you) before summarily filing it away. Several of these complaints act as interstitial scenes in the book, often bleaker and bleaker metaphors for the perils of modern life. These complaints are often beautiful little bits of art on their own- sometimes time-displaced letters to lost loves, or just shouts into the ethereal unknown. This is not unlike what many people use the internet for (perhaps Twitter, specifically) – to understand or be understood. To be heard.

But is simply screaming into the void enough? In Deforge’s opinion, absolutely not. It might be a balm, but it is no cure for the modern human. At some point we must rejoin the herd, in physical form, and make our voices heard, together. Deforge’s life informs this work, and in particular, his service as a political protester. His stance rings crystal clear in “Familiar Face.” We are a fractured society, pitted against one another in the advance of corporate greed. “It’s all amalgamation and fuckin’ capital,” as the HBO show Deadwood’s Charlie Utter once so succinctly put it. As our protagonist searches for her lost(?)/missing(?)/departed(?) ex-girlfriend, she finds herself drawn to an underground movement of cartographers (of which her ex might have been a founding member), and a protest movement founded by her out-of-work actor ex-roommate. Both of these individuals saw the writing on the wall, that society needed changing, much sooner than our protagonist, who might have just been numbed to it by having to experience the worst of it at her job every day. In beautiful splash pages of chaos and color, our protagonist visits these protest sites, not knowing quite sure what to do, but coming to the realization that it needs to be done.

To know Michael Deforge’s art is to love it. A surreal mash-up of Keith Haring’s iconic, flat pop-art and Pendleton Ward’s loopy, organic shapes from Adventure Time (of which Deforge himself was a design artist), Deforge’s pages are filled with bits and pieces that entice the eye to wander. It feels like pinnacle “millennial with ADHD”: bright, flat shapes and colors best-suited for those who grew up on MTV and Nickelodeon, transitioning into adults with smartphones updated with dozens of apps that don’t always do much other than add to the dizzying palette of options available to its users. It’s hard to get bored looking at Deforge’s work, the surreality at first a confusing amusement, morphs further into a quest for metaphor or allegory in its strange shapes (I’m still thinking of the subway rails looking organic and vein-y, rather than technological constructs). This work in particular also often takes on the trappings of modern communication, the personification of a Siri or Alexa embodied as a living emoji-face, while walls, televisions, and picture frames have the pleasant slight curvature as the apps on our phones. All of it culminates in the unsettling feeling that corporations have our number- they know what colors, shapes, and sounds breed placidity and encourage (or better yet, guilt) people into consuming.

“Familiar Face” is, like my favorite pieces from Deforge, a dizzyingly surreal and complex look at society; one that seems on the precipice. To look out the window right now at emptied streets that are almost unrecognizable, to watch the increasingly alarming news on our phones or computers, all the while practicing “social distancing,” or even quarantining ourselves, the artist seems to have latched onto the moment before the moment. While we shout our fears into the void online, aiming for connection, it will be, it must be, solidarity in a movement that will have to unite us once again. The familiar face we seek is not just our own, but from within our own community: where are the familiar faces of my family, my friends, my co-workers? The world seems to optimize faster than we can calibrate to the changes. Was it ever thus? Though I don’t feel like I have the capacity or authority to proclaim something an “important” work, it very much feels like one. I hope that each of you find the opportunity to read this book, and I hope it encourages you to seek out a familiar face in these trying times.