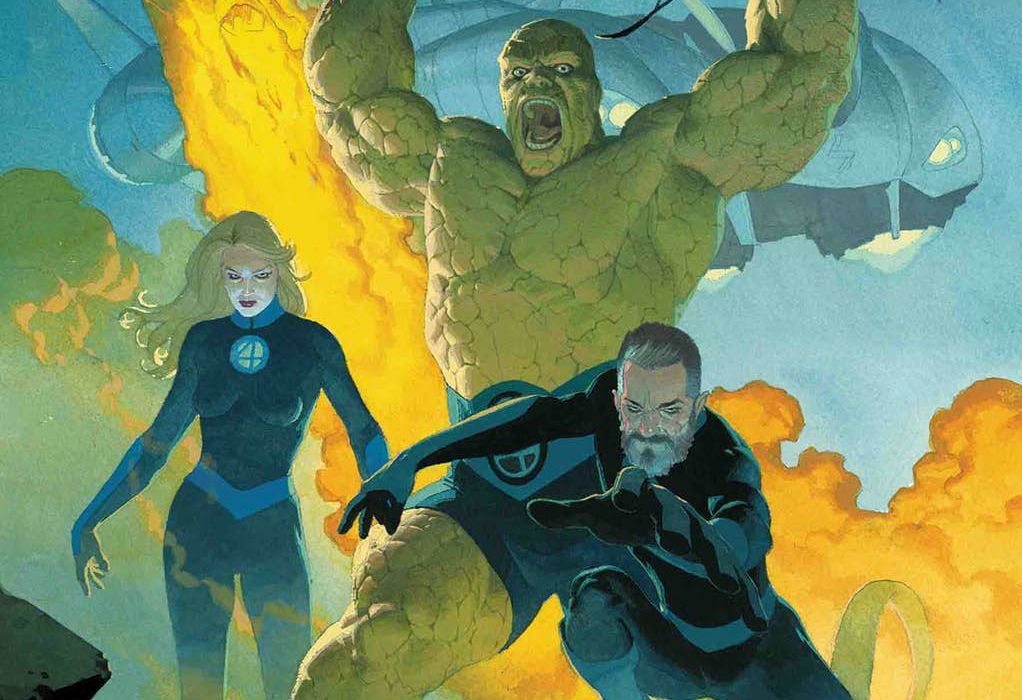 Marvel’s First Family are back! Well, not quite, as “Fantastic Four” #1 doesn’t completely bring the band back together, but certainly sets the stage for the reunion tour. Read on for our review, which contains some spoilers. 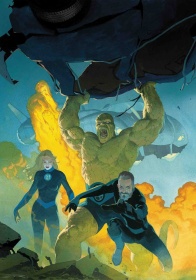 FOUREVER Part One BECAUSE YOU DEMANDED IT – THE WORLD’S GREATEST COMIC MAGAZINE IS BACK! Since the end of SECRET WARS, there’s been a gap in the Marvel Universe. A void no other team can fill. And it’s time for the world to move on. But can it? A life-changing decision by the Thing! A momentous declaration by the Human Torch! A clarion call-to-arms that summons Doctor Doom! And a signal in the sky that heralds the return of hope to the Marvel Universe! All this, and Alicia Masters adopts kittens! So cute! Plus, the Impossible Man! AND BONUS STORIES ILLUSTRATED BY SIMONE BIANCHI AND SKOTTIE YOUNG! IF YOU READ ONLY ONE MARVEL COMIC THIS MONTH, THIS IS THE ONE!

While the end of the solicitation implores us to pick only this issue if you have to read just one Marvel Comic this month (always a strange claim), there’s a real sense that the action is really going to begin next month in issue 2. It’s so striking that Marvel even put a disclaimer in the back of the issue (delivered in a telegram to the Impossible Man of all people) that FF will be back together in next month’s issue. Because of this, there have been some folks in the fandom that have gone so far as to say that “Fantastic Four” #1 should actually have been an issue zero, and while that claim goes some way towards validating the frankly bizarre comic book tradition of having issues that come before a first issue, it’s hard to argue against their point.

The biggest sign that “Fantastic Four” as a title may, in fact, be false advertising (in an issue with more than its fair share of literal false signs moving the plot forward) is the contents/recap page. Designed to feel like the “Fantastic Four” issues of old, the aesthetic of the recap page is almost identical to ones used in previous volumes, except for one thing: the character bubbles that introduce the core cast – usually at least four because, well, you know – are reduced to just two – Johnny Storm and Ben Grimm. Aside from one, shadow-filled teaser of a page, the other members of the titular quartet – Susan Storm-Richards and her husband Reed – are nowhere to be seen.

This isn’t necessarily a bad thing, nor is it really a detriment to the story. After all, the Fantastic Four have not been around in the Marvel Universe for some time now (in our world considerably longer, with the last “Fantastic Four” issue coming out over three years ago in April 2015) so it’s only right that we find out just what’s been happening since they’ve been gone, but here’s the thing: Chip Zdarsky has been doing a fantastic (excuse the pun) job of doing just that over in “Marvel Two-in-One.” So much so, in fact, that one can’t help but feel like this issue is just another installment of that series, rather than a brand new chapter of the “Fantastic Four.” You could argue that if Marvel had allowed “Two-in-One” to do its job properly, the FF should have returned in that series, allowing for this one to kick off in a much more dynamic way.

Are these the gripes of a fan that just wants to see the Fantastic Four of the title reunite and make their comeback already? Perhaps. As mentioned earlier, none of this makes for a bad issue, and if the absence of Sue and Reed (not to mention their children Franklin and Valeria, and the rest of the Future Foundation for that matter) means that we get more of the ancillary cast of the “Fantastic Four,” such as Alicia Masters and Wyatt Wingfoot – two characters we see more of here in one issue than we have in the last three years of Marvel comics – then that’s a good thing. It’s also clear that Dan Slott is keen to bring his skills with an ensemble cast into play here – skills very much necessary during his tenure on “Amazing Spider-Man,” a book with arguably the best cast of supporting characters in comics. As much as the Fantastic Four are a family first before they are adventurers, “Fantastic Four” as a series is always at its best when it’s focused on the characters first, and then their adventures second. In that regard, Slott has succeeded admirably.

Sara Pichelli has established herself within Marvel as a powerhouse of dynamic character design. Her work on “Ultimate Spider-Man” with Brian Bendis, then following Miles Morales into the 616 (sorry, Prime) Marvel Universe made many fans of that character extremely happy. To them, Pichelli was the Miles Morales artist. Here on “Fantastic Four,” her strengths are as strong as ever. The emotional interplay between the cast – such as the argument that leads to heartbreak that leads to elation in the final few pages – is handled superbly, and it’s crystal clear how each character is feeling thanks to Pichelli’s excellent linework. Similarly, a flashback sequence that involves all of the FF on a stereotypical, if revelatory space mission (who knew Johnny Storm had the singing voice of an angel?) shows that the intergalactic adventures yet to come from this series are going to look amazing, thanks to Pichelli’s deft handling of pacing, action, and page structure.

The only real issue that rears its head occasionally is how Pichelli draws the Thing. Ben Grimm may be one of the trickiest characters for artists to “get right” (a knack that unfortunately Esad Ribic – cover artist for this issue as well as amazing artist of books like “Secret Wars” and “Thor: God of Thunder” – has still yet to master). For the majority of the issue, Thing is just fine, and his scale and form are perfect. It’s only occasionally when his face contorts into a smile that it just seems a little off, almost as though Pichelli is forcing a more human face onto Grimm rather than leaning into his more unique features.

Despite this feeling like a relatively negative review, “Fantastic Four” #1 shows a great deal of promise. The interplay between the cast is relaxed and natural in a way that acknowledges the vast history these characters have with each other without being exclusionary to new readers. Slott has got a handle on the individual voices of Johnny, Ben et al right out of the gate, making this feel like the next chapter of their story rather than a new writer coming into the world and trying to make a splash. Slott clearly loves these characters, and his familiarity with the heroes, their world, and what’s important to them shines through. What’s also clear, thanks to his thoughtful, fun and emotional script, is that Slott understands what makes the “Fantastic Four” such a unique series. As Sue’s voiceover attests at the start of the issue: “We are adventurers. And we’re on the greatest adventure of our lives. Being part of a family.” Thanks to Slott, Pichelli and everyone else that worked on this issue, it’s a pleasure to once again be on that adventure with them.

Final Verdict: 8.0 – Despite feeling more like a prologue than the actual first issue, “Fantastic Four” #1 allows both Slott and Pichelli to prove why they’re the right people to bring back Marvel’s First Family.