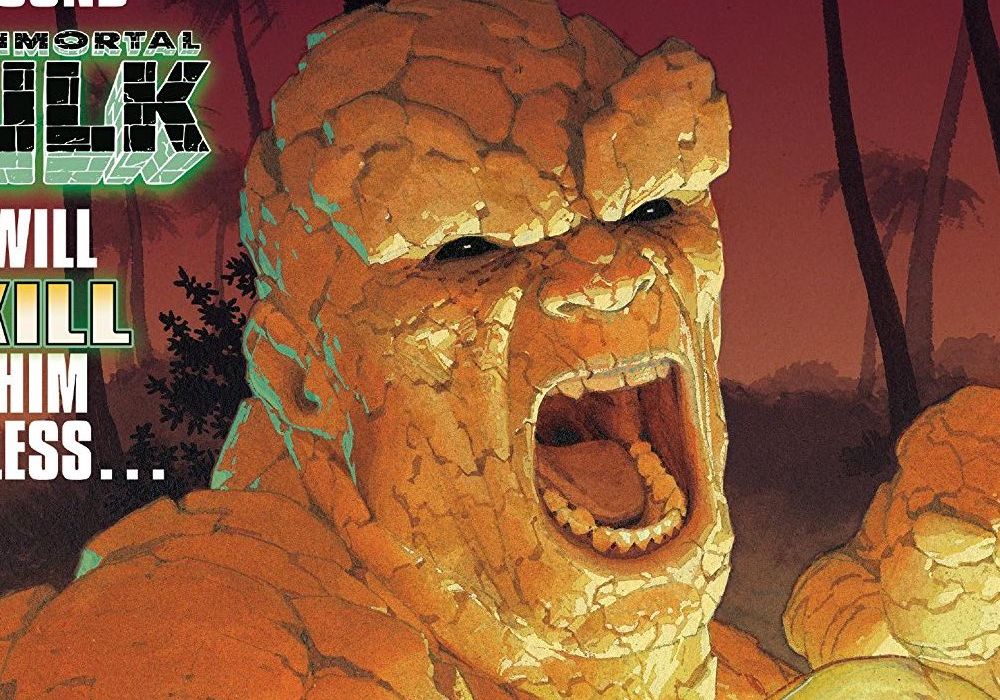 The newest incarnation of “Fantastic Four” has kept a light tone while telling a story of consequence. Author Dan Slott has been crafting stories in the property to utilize honest conversations with family drama and superhero action. The series has carried an intense focus on Benjamin Grimm and Alicia Masters for their big wedding. Slott’s lead-up to the monumental event has been a joyous way to interpret the franchise and tell stories that honor what came before in Marvel history. In the middle of Grimm and Masters big honeymoon, Hulk came out to spoil the show. Plus, Grimm is going to turn back into a human for the honeymoon for a limited time only! What other plot elements is Slott hiding just beneath the surface of “Fantastic Four” #13? 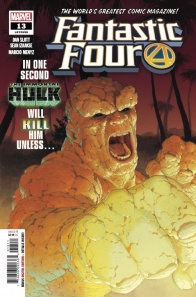 The clock is ticking down. The moment is almost at hand. That do-or-die instant where Ben Grimm will either find the will to win – or be annihilated by the fighting-mad Immortal Hulk!

Seeing “Fantastic Four” function like a high-stakes, action-packed comic was a true delight this week and a big change of pace. Grimm’s battle with Hulk carried serious pathos and emotion thanks to the important setting of the battle. Slott also made sure that the battle was emotionally tied to Alicia and Ben’s wedding. Slott’s moments with Masters were also pulse-pounding as the physicality of the rocks caving on Alicia established tension for her character. While the latest issue of “Fantastic Four” serves to simplify some of the plotting aspects, the emotion here is potent.

Sean Izaakse draws inspired action. Izaakse frames the first page with a huge amount of epic conflict with Hulk and Thing trading blows. Izaakse draws a darker Hulk to match up the pages of “Immortal Hulk” in a manner readers typically wouldn’t expect. Izaakse gives a fascinating detail to draw the eye towards the page in every panel. Izaakse’s rendition of the Puppet Master captures what made the character so visually foreboding in the early 60’s to begin with. Phillip Masters carries a stirring smile showing just how ominous he is as a villain.

Slott interrupts the flow of the action with flashbacks, captions, and dialogue that carry the plot forward instead of holding it back. I was fascinated to read every caption box and see just how bad Hulk would injure Grimm. When the battle concludes, Slott finds a resolution that has a consequence but serves as an important resolution for a key moment in Grimm’s life. Slott appeared to have taken an event like a honeymoon and added artificial Marvel Universe drama with a misunderstood battle with a friend. However, Slott goes beyond the stereotypical plot by showing how Alicia has to look the other way when Ben is in the middle of a huge battle that could compromise his well being.

The epilogue weaves an interesting two-page story that is shockingly dark considering some of the previous work. While I commend Slott for switching tones in the issue, I’m not convinced that the sudden shift in tone worked. There was a huge change between the dark confrontation with Hulk and the big fight with Grimm. While the title contained bigger stakes and high drama, it didn’t quite evoke a similar level of violence and carried a happy ending. Up to this moment, the proper “Fantastic Four” series has been relatively light on the action making this installment a welcomed new direction for the series. After this, Slott is likely going to switch gears and not provide readers a similar issue next month.

Marvel has been shuffling around artistic creators on The First Family’s core series wisely. It is great to see Izaakse’s more ambitious, visceral pencils get center stage for a big fight as opposed to previous creators like Paco Medina who drew past adventure-based issues. Even still, I hope to see previous creators Aaron Kuder and Sara Pichelli come back to “Fantastic Four.” I also like how Slott was able to make this a true Fantastic Four story by weaving small science fiction concepts into the story. Grimm’s transformation back into a human is looming over all the fight scenes. The title evokes older stories with the characters in just how paranoid Grimm comes off through the captions. Grimm seems genuinely worried about whether he will come out of the fight and go on his proper honeymoon.

“Fantastic Four” #13 is a creative way to show off an important moment in Ben Grimm’s relationship. The issue capitalizes on current continuity by showing just violent Hulk can get. Some of the battle damage and serious scars from Izaakse make the visual direction something to Marvel at. Slott scripts an action-filled narrative with big fight scenes which serve to move the plot forward. Slott also crafts an important moment in the life of the Fantastic Four that lives up to the title. I hope to see this entire run continue to flesh out Grimm’s relationship with Masters and hope that Slott has a lot more material for the couple in upcoming stories.

Final Verdict: 8.0 – “Fantastic Four” #13 is a heart-warming and action-packed new installment of the series.