Why do citizens of the Marvel Universe still live in New York? It’s a question I’ve asked before and it’s a question I’ll probably ask again. Even if we set aside the risk to your life, what about the risk to, well, literally everything else? Hank Pym could stumble and flatten your car into a pancake. Captain Marvel could get thrown through your office building. Thanks to the Avengers shenanigans you could end up trapped under some force field…it’s all so risky. You would have to be ready to switch up and make massive life changes on a dime. It’s even happening to the superheroes. After traveling the multiverse, the Fantastic Four returned to find a whole different team of superheroes living in their beloved Baxter Building. Now, they’ve been forced to move to the Thing’s old stomping grounds, Yancy Street. 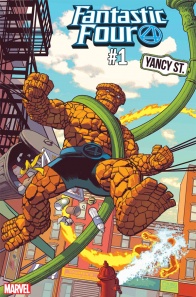 Written by Gerry Duggan
Illustrated by Greg Smallwood, Mark Bagley, Luciano Vecchio & Pere Pérez
Lettered by VC’s Joe Caramagna
Colored by Greg Smallwood & Erick Arciniega
The first of a series of regular essential releases expanding on the ongoing legend of the Fantastic Four and their world! The FF are now living on Yancy Street, but not all of their neighbors are happy about that. The Thing investigates a nasty piece of vandalism that conjures up painful old memories as he takes a trip down memory lane through the Lower East Side and it’s made all the more dangerous by…THE TERRIBLE TRIO!

In this issue, the ever-lovin’, blue-eyed Thing is shocked to learn that while the FF has adjusted pretty well to the neighborhood, the neighborhood hasn’t adjusted too well to them. Yes, Ben was kind enough to build a new youth center in his late brother’s honor, but now gentrification is starting to take hold of Yancy Street. People want to live in the presence of the Fantastic Four’s celebrity so rent is being doubled and folks are forced out.

The move to Yancy Street could have easily just been a superficial change to the Fantastic Four. However, the change in locale and lifestyle is thoroughly explored in the main title and this issue. You have to respect that. Furthermore, it’s an interesting idea. The Baxter Building might as well have been Mount Olympus but now Marvel’s First Family no longer sits on high. Now they’re among the people. Not just any people either. The people of Yancy Street hate them…1/4 of them at least. It has to be kind of jarring for characters that enjoy beloved celebrity status, even more popular than the Avengers at times.

As interesting as the concept is, I can’t say that the execution was flawless here. I would say that’s mostly because of the supporting cast around the Thing. The neighborhood local that we spend the most time with, the child who tags the youth center, isn’t all that likable. The youths of the Yancy Street Gang hate Ben but sometimes they can meet halfway. They have common ground, they all love the block at the end of the day. There’s no halfway with this kid though. Even when he’s right, he’s a total brat. I wish that the Thing interacted more with neighbors that actually liked him. We see two panels of grateful neighbors and that’s it.

Similarly, the villains fall flat. First there’s the Terrible Trio, the villains forcing people out of the neighborhood. I’m not familiar with the Terrible Trio at all and they don’t make much of an impression here either. There’s a guy in a suit, a guy with super-strength and Yogi Dakor…who’s probably from another time. In the back of the paddy wagon, it’s revealed that they were paid to take a dive but I can’t really bring myself to care why or by who or take these guys seriously.

Then we have the caricatures of millionaires with their old-timey matching suits and monocle. Scrooge McDuck is more subtle. Finally there’s Doctor Doom. Victor has built a robot disguised as an old lady just to throw a pie in Ben’s face. That humor fell flat for me…I would have liked it a lot more if they played it straight. Doctor Doom has a robot spying on them from across the street, ready to attack at any moment. That’s a solid ending there but ultimately, not what they went with.

On the other hand, the artwork is very strong. We’ve got a star-studded roster of artists for this issue. Pere Pérez’s artwork is solid for his pages, translating smoothly from the big superhero action that Mark Bagley draws on the pages prior. Luciano Vecchio’s pages are worthy of note too, solid just like the work he’s doing over on “Ironheart”.

I have to say though, I adore Greg Smallwood’s artwork. His style, to me at least, feels timeless but classic all at once. I’m no art expert but it makes me think of Norman Rockwell. Jack Kirby’s influence should be noted as well. The panels of the Thing’s exaggerated yelling and fist-waving feel like they’re ripped from the classic FF issues. Reed is surrounded by a big convoluted Kirby-esque machine like the kind you’ll find in those old comics. I love seeing things like that. Even the device he hands Ben crackles with Kirby dots. His style here is perfect for the opening flashbacks and the effects used to make the pages faded and slightly yellowed like a really old issue brings out the best in his work.

In addition, I like the focus on Ben Grimm himself for this issue. While Reed was the ‘main’ main character during Hickman’s run, Ben’s had the spotlight since the Fantastic Four have come back post-“Secret Wars”. He’s just a great character. It’s hard not to get sentimental reading the point of view of the big lug. The loss of his older brother has always stayed with him and he wants to see the next generation do better. He’s the heart of the Fantastic Four, keeping them down to Earth and grounded even throughout all their sci-fi adventures. He earnestly wants the best for his community even though a good chunk of that community can’t stand him. But hey, what are you going to do? Home is home.

Final Verdict: 6.5 – Everyday its been the same old thing on my block.