If it weren’t for the Fantastic Four, Marvel might not be around today. There was a time when Stan “The Man” Lee couldn’t see his comics career panning out and was about to hang up his cape. His wife, Joan Lee, suggested he write one last comic his way. Stan Lee wrote about a brilliant scientist–his best friend–the woman he loves–and her fiery-tempered kid brother! After the Fantastic Four came the likes of Spider-Man and Thor. Everybody should pay homage to Marvel’s First Family. 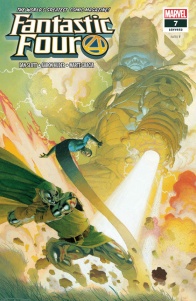 Written by Dan Slott
Illustrated by Aaron Kuder with John Lucas
Lettered by VC’s Joe Caramagna
Colored by Marte Gracia with Rachelle Rosenberg
“HERALD OF DOOM” PART TWO! In a battle between Doctor Doom and Galactus, who would you favor…A man who is trying to be a hero to his beloved nation or an unstoppable cosmic force of nature? It’s a simple choice, unless you’re Mister Fantastic. This dilemma, plus a strange new development in the life of the Human Torch. And a long-forgotten threat from the Fantastic Four’s past resurfaces…

When the All-New, All-Different Marvel initiative spun out of “Secret Wars”, the Fantastic Four were noticeably absent. The Thing hung around with the Guardians of the Galaxy and Human Torch joined the Avengers but it wasn’t the same. The closest thing was Al Ewing’s “Ultimates” (which I highly recommend). The First Family’s return was hinted at when Marvel Legacy kicked off and finally the Fantastic Four are back!

“Fantastic Four” #7 continues the battle between Doctor Doom and Galactus. The Devourer of Worlds is a powerful opponent but Von Doom has the home field advantage. Victor has clearly been preparing for this fight (Fun fact: Black Panther has Anti-Galactus plans handy too). His new herald, Victorious, lures Galactus in close while he bombards Galen and drafts the Fantastic Four to his side.

Doom commands Susan to tend to the civilians and Ben and Johnny to run interference while Reed helps him. Johnny manages to free Victorious while the Thing tangles with Galactus. When Ben is struck with the full might of the Power Cosmic, Susan joins in the fight to help. A desperate Reed manages to distract Galactus with the Ultimate Nullifier long enough for Victorious to deliver the knockout blow. Doom broadcasts his victory around the world and reveals his plan to harness Galen’s immense energies. When Reed protests, Doom turns his weapons on the FF and sentences them to death.

While I’m happy that the characters have returned, I have to admit this run hasn’t really been my cup of tea so far. On one hand, the art has been good. Aaron Kuder’s fight scenes in “Fantastic Four” #7 are engaging and full of energy. The colors are bright and the book is fun to look at. Seven issues in, it’s been fine on the family aspect of the team too. I do appreciate that Ben Grimm and Alicia Masters have finally tied the knot. That relationship has been just fantastic over the years and the ever-lovin’, blue-eyed Thing deserves his happiness. Beyond that though, it’s been standard superhero fare. The Fantastic Four aren’t supposed to be standard superheroes.

Sure, they punch a mole monster back underground but the FF are explorers at heart. ‘Imaginauts’. From the very first rocket flight that started it all, the Fantastic Four have been all about discovery and traveling to new frontiers. That’s when they’ve been at their best, in my opinion. Jonathan Hickman’s run had a lot of that. Under his pen, the team expanded to form the Future Foundation, discovered new cities and civilizations, traveled through time and got into multiversal shenanigans. It was heavy on the super-science and everything felt new. I would recommend Mark Waid’s run as well. His tenure is different from Hickman’s but it also takes the FF into new territories. Waid had the Fantastic Four take over Latveria and engaging in politics. He took Reed to some dark places and temporarily killed off the Thing. Even more amazing, he had the team literally knock on Heaven’s doors to get Ben back.

So far, this run has been heavy on nostalgia. The opening story was all about the FF’s legacy and brought back every member. Doctor Doom is back to being their arch-nemesis, using them and betraying them. Again, standard fare. No one really thinks he’s actually going to kill them. Why would he want to anyway? It would seem that the powers that be have opted to completely abandon the anti-hero direction Doom was heading in during All-New, All-Different Marvel. It’s a shame, there was potential there. Not to mention some loose plot threads. I mean…doesn’t he have a baby on the way? Is that never going to be acknowledged again?

Slott’s new character, the Herald of Doom that the arc is named after, fails to leave an impression much like the Fantastix before her. The writer also has made the puzzling choice to do away with newer characters in the FF mythos that have left an impression. The entire Future Foundation, the Fantastic Four’s extended family, chose to stay out in the multiverse instead of returning home. Even Franklin and Valeria, who have stepped up time and time again, are sidelined. The siblings point out that they were part of the team in the multiverse but are now not allowed on the front lines. It makes no sense to them or to me. This issue continues this run’s trend of looking back when the Fantastic Four should be among the first to look forward.

Wyatt Wingfoot’s back though, in case anybody wanted that.