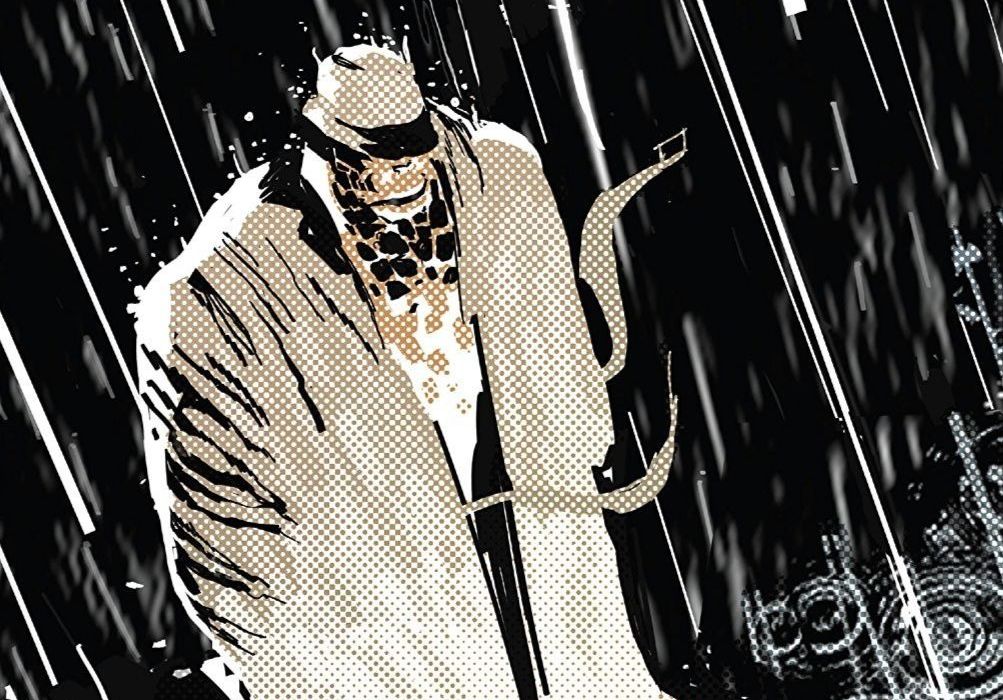 Even before I knew what comic books were, I loved Ben Grimm. When I was about six years old, I traded one of my toys for a The Thing action figure. He was covered in sand, and missing part of his arm, but he captured my imagination. He was big and strong and orange. He had a grump scowl on his face, and I just thought he was the coolest. As I started reading comics, and Fantastic Four specifically, The Thing continued to be one of my favorite heroes. He’s a character that had justification to become a villain. While the rest of the team could hide their powers, he was always stuck as the big orange guy. But he chose to save others. Sure he could be grumpy, or morose, or just plain hot-headed, but at the end of the day, he was a good soul. But at his core, there is still part of him that wants to be just regular old Ben from Yancy Street. That inner conflict is the major driving factor of “Fantastic Four: Grimm Noir” #1, creating a mystery that is moody and atmospheric, much like the genre that inspired it. 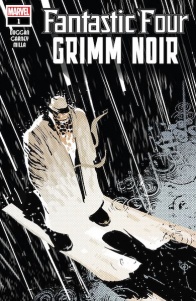 Cover by Ron Garney
Written by Gerry Duggan
Illustrated by Ron Garney
Colored by Matt Milla
Lettered by VC’s Joe Caramagna
Ben Grimm throws on his hat and overcoat to solve a mystery that’s come alive right out of his nightmares. What is Dr. Strange’s nemesis D’Spayre doing on Yancy Street?

There are two mysteries that drive “Fantastic Four: Grimm Noir” #1. The first is that Ben Grimm is having recurring nightmares. While it might not seem that mysterious, there are enough common elements that make Ben concerned. Namely that they involve the same menacing figure. Looking for any distraction to prevent another night of interrupted sleep, Ben investigates the disappearance of his neighbor, a singer. Like most good Noir films, the mysteries begin to connect with one another. But the mystery is just one part of the puzzle. There have been plenty of comics that feature mystery but would not be considered “noir.” Where the issue succeeds is how it embraces the choices of the genre.

The art of “Fantastic Four: Grimm Noir” #1 really helps to set the tone of the comic. Ron Garney and Matt Milla do some really impressive work making the panels look at feel like film noir, which is achieved in a number of different ways. The big one is the comics’ use of shadow and rain, which creates a general feeling of unease. The colors are muted, often playing with various shades of grey, but sometimes allowing just enough color to pop to make a real impact. This is especially true with Ben’s blue eyes. The piercing blue through the blacks, greys, and muted orange leaves an impact and heighten the emotions Ben is feeling. There are also panels that recreate classic noir cinematography. Most notable is the panel of Ben and Alicia in bed, the angle high through the fan blades, the blade creating a divide between the Thing and his wife. It’s good visual storytelling, showing the impact of Ben’s nightmares on his relationships.

It should also be noted that Gerry Duggan’s script is also quite good. The Thing really feels like a classic noir detective. There are times that he is gruff and full of masculine posturing, which is especially true when he confronts the officers investigating his neighbor’s disappearance. Where the issue really excels, though, is in the narration. Much like the films that inspired it, the narration in “Fantastic Four: Grimm Noir” #1 allows for the Thing to show his true vulnerability. As the issue progresses he has become more tired, more vulnerable, more prone to despair, and then D’spayre shows up.

The nightmare sequences in “Fantastic Four: Grimm Noir” #1 are impressive enough throughout, but when the villain finally reveals his plot everything begins to fall into place perfectly. D’spayre is a villain that feeds on negative emotions and can manipulate nightmares to heighten that despair. According to D’spayre, Ben is like a lightning rod. Throughout the issue, Ben describes his nightmares, how he stars human, becomes the monster he’s clearly still unhappy with, and then ultimately brakes or fails when he chooses to embrace his heroic nature. What makes the nightmare sequences even more impressive is the combination of radically different art styles, colors, and page layouts. Each page reveals a little bit more about Ben’s difficult past, turning into the Thing just one part of a hard life. It’s great visual storytelling, reinforcing the narration but not constrained by the words.

There is one major way that “Fantastic Four: Grimm Noir” #1 doesn’t follow in the footsteps of its film predecessors, Ben fights back. Many noir films end with the protagonists isolated and alone, but here the Thing realizes that isolation is one of the things that drives D’spayre’s ability to feed. Even though Ben has a living support system in his friends and his wife, being The Thing will always make him feel a bit alone. He says as much, his biggest fear is destroying what he loves. D’spayre uses this feeling isolation for control, but he’s able to break this control, face his fears, and rise victorious. The issue ends with Ben happy, surrounded by his wife, his family, and his new friend Rebecca. He fought through a nightmare faced his fears and came out on the other side living a dream.

Final Verdict: 9.0 “Fantastic Four: Grimm Noir” #1 creates a comic that takes full advantage of the storytelling conventions of film noir while telling a powerful story about fighting back against your inner demons.