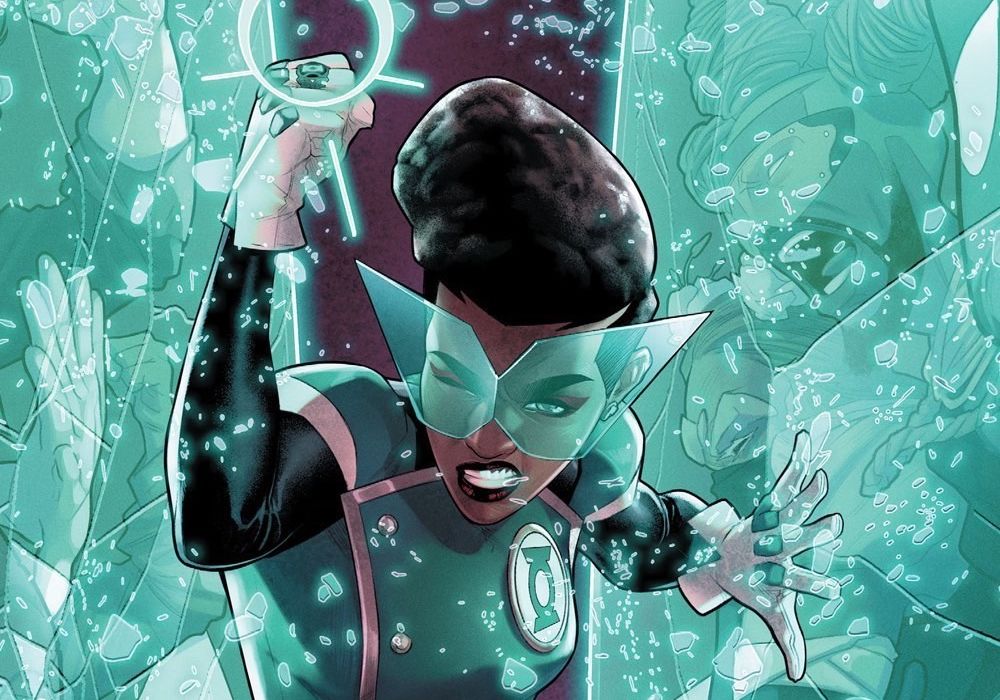 DC’s Young Animal imprint has been fond of taking existing DC properties and applying new twists on them to make a unique story. “Far Sector” follows newly chosen Green Lantern Sojourner “Jo” Mullein in the distant future shortly after violence broke out for the first time in 500 years. “Far Sector” is a meditation of violence illustrating just how versatile the Green Lantern property can be for readers. Thanks to writer N.K. Jemisin and artist Jamal Campbell, the series has kept a slow but intriguing pace. Jemisin is not rushing to tell the story of Jo and takes the time to establish the premise and rules of the world in each issue. Campbell’s pencils have imbued the title with a casual aesthetic that has made each installment of the series a joy to read this far. Can “Far Sector” #3 keep a brisk pace while integrating readers deeper into the story? 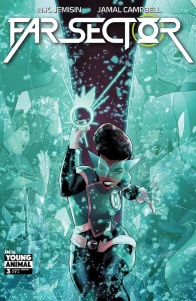 Protecting the City Enduring’s population of 20 billion aliens gets even harder when rookie Green Lantern Jo Mulein is thrust into the middle of a massive protest that’s about to get out of hand. What do the protesters want? The right to feel.

N.K. Jemisin’s script for “Far Sector” #3 tricks readers into thinking the issue is going to be a slow and plodding story. The title slowly picks up momentum towards the second half of the issue and finds a few interesting things to say about the nature of conflict. Curiously enough the story almost functions as an issue of Grant Morrison and Liam Sharp’s “The Green Lantern” in how Jemisin’s scripts interpret the meaning of violence. Jo is an altruistic hero and her absolute last resort involves using her ring for lethal force. Jemisin does a great job showing readers where Jo stands while properly motivating her as a Green Lantern. The series is full of restraint as well making sure to not cram too many dialogue bubbles or captions into any given page. For a book featuring a comic book writing debut for a prose author, “Far Sector” has always been a special, incredibly confident debut series.

I love Jamal Campbell’s pencils in “Naomi” but I always wished the plot and dialogue were as good as Campbell’s interiors. “Far Sector” finally gives Campbell a script to match his incredible talent and is a large portion of what makes “Far Sector” a great issue instead of just a good one. Campbell’s characters are so expressive and convey so much emotion on the page. Campbell always chooses incredibly interesting secondary activities or framing to make the pages look as visually dynamic as possible. The first five pages of the issue take their time fleshing out the characterization of the supporting cast members. Campbell’s creative pencils keep the momentum of the story rolling past this intriguing opening sequence that could have slowed the entire issue down. Jemisin shows more restraint in the scripting than authors Brian Michael Bendis and David Walker did in “Naomi.” The change allows Campbell’s pencils to have a stronger level of subtext in the pages of “Far Sector.”

I greatly enjoyed the visual designs that Campbell has brought to the series as well. When Jo is at home in her casual clothes, the contrast to her Lantern outfit is visually intriguing. The interspecies focus that the title has allows for a couple of interesting alien designs that always look great on the page as well. The application of technology and setting for the story also allow “Far Sector” to feel visually distinctive from other DC Comics. The issue also features an intriguing fight when Jo attempts to broker peace at the end of the script. Campbell’s art takes the future setting of “Far Sector” and directly contrasts the violence to modern-day police brutality. This visual choice builds up tension in the issue incredibly well and paints a disturbing scenario that helps readers relate to the science fiction world of “Far Sector” incredibly easily.

Jemisin’s script in “Far Sector” #3 is also focused on the political implications of the series. When the violence broke out disturbing the trend of peace in the first issue everything changed for the series. Jemisin has done an excellent job keeping the tone of the book clear and making sure that further developments in the series evolve with that act of aggression. “Far Sector” #3 is able to achieve a level of cohesion that “The Green Lantern” strives for as the book is more serialized in plot. Due to the surprising political twist towards the last couple pages of the story, the first part of the issue is likely even more important than readers initially thought. Jemisin and Campbell have a special collaboration in the field of comics that makes the series even better. Jemisin trusts Campbell in pages that have minimalistic dialogue or only caption sequences. Going forward it would be great to see a couple of silent sequences that allow for Campbell to take full advantage of the artistic abilities.

“Far Sector” #3 is a special comic book. For a Green Lantern book set in the future, the story isn’t alienating or too dense to follow. This series is an incredibly relatable story grounding Jo in a world of aliens far in the future who all just broke out into violence. Jemisin’s script and Campbell’s art combine for a strong comic book collaboration.