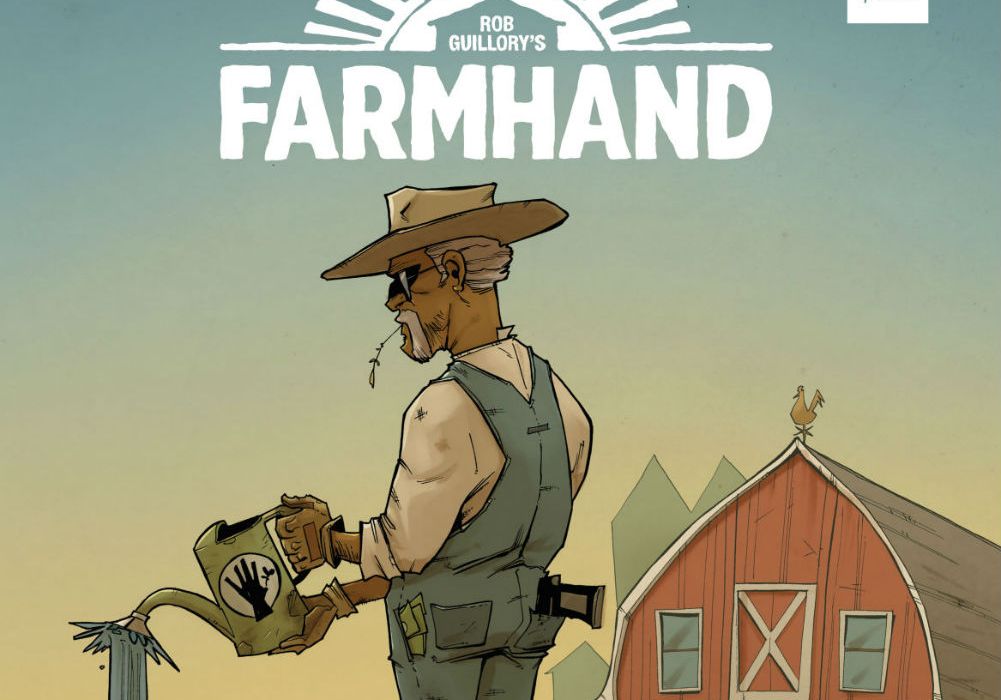 Rob Guillory delighted and disgusted readers with his psychic food-crime comic Chew. Now he’s back at it again. In Farmhand, human organs are literally planted and grown in the dirt. Fans of Chew will find a lot to like here. For everyone else, Guillory has two major skills on display here: an unrivaled talent for worldbuilding and a sophomoric need to go for every gross-out gag. While there’s undoubtedly an audience for that sort of thing, the ugliness mostly feels like a distraction from the whackadoo brilliance of the book’s loft sci-fi themes. 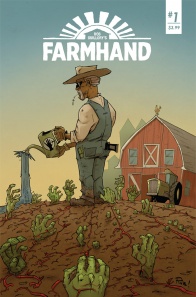 Jedidiah Jenkins is a farmer—but his cash crop isn’t corn or soy. Jed grows fast-healing, plug-and-play human organs. Lose a finger? Need a new liver? He’s got you covered. Unfortunately, strange produce isn’t the only thing Jed’s got buried. Deep in the soil of the Jenkins Family Farm, something dark has taken root, and it’s beginning to bloom. From ROB GUILLORY, Eisner-winning co-creator and artist of Image Comics’ CHEW, comes a new dark comedy about science gone sinister and agriculture gone apocalyptic. Nature is a Mother.

The issue begins with a bloody dream. I’m of two minds when it comes to dream fake-outs. On the one hand, it seems like a waste of page real estate. With so much to introduce the reader to, a five-page sequence of nightmare imagery isn’t all that necessary. On the other hand, it serves as a decent introduction to two of the main characters: Zeke and his sister Andy. While Zeke is our point of view protagonist, Andy only shows up later in the issue and having some foundation for their complex sibling relationship makes sense. I question if this was the best way to go about it.

This brings us to our main plot: Zeke is taking his family to see his father, who he hasn’t spoken to in years. Jedidiah Jenkins, once a simple farmer, invented a seed that grows horrific body-part plants. Tree branches that end in bloody hands, eyeballs sprouting like strawberry bushes- these are the main visuals that Guillory fills the pages with. It’s gross. That’s the point. Your mileage may vary.

Halfway through the Jenkins family tour of the farm, a young tourist is revealed to be a “code purple”- which is to say a Russian operative trying to steal farming secrets. It’s through this conflict that this technology’s impact on the world starts to present itself. It’s valuable but weird, and everybody wants a piece of it. The “code purple” boy has a prosthetic arm with a hidden robot chamber, and Old Man Jenkins asks him if he lost his arm in “the war.” It becomes clear that while the family drama is at the root of the series there’s a dark Willy Wonka story here, one where Slugworth is trying to steal human organs.

All of this makes for an interesting comic, but Guillory isn’t just writing the book, he’s drawing it as well. And Farmhand is an ugly book. That’s not a knock against Guillory’s art- he’s clearly a talented cartoonist executing his vision. But what he chooses to draw is consistently ugly, maybe overly so. The montage of the bloody farm is great b-movie horror stuff, but the rest of the world is equally disgusting.

One offhand panel in particular is a great microcosm of Guillory’s sensibilities. Zeke takes his son to pee in a public bathroom on the road. His son is too short for the urinal, and his pants are pulled all the way down. The sound of his urination? Piddle piddle. The bathroom is filthy- there’s not one, but two puddles of florescent yellow pee on the floor. On the far left, a man’s hair legs and tighty-whities dangle into one of the piss-puddles in a bathroom stall. On the far right, a sign reminds bathroom users to “wash yo stank hands.”

The panel is one in a travel montage, capturing tone and mood more than anything else. And that tone and mood is gross. That’s the world here, one where every sign is casually rude and every room is impossibly filthy. One plaque reads “A Brief History of Creepy Body Part Plants.” This is the make or break demand the comic demands of its reader. Are you amused by this? Will you tolerate it to get to the bleak sci-fi thriller? Or is all this repulsive crap simply too repulsive?

The disgusting aesthetics extend to every aspect of the art. Every little kid looks filthy, as does every redneck farm worker. Most surfaces, especially human skin, have an ephemeral sticky quality to them. The only character totally immune to this is Zeke, who with his neat beard, looks like a sexy version of Rob Guillory himself. Hmm. That’s interesting.

That’s what Farmhand has to offer you. It’s gross. Oppressively disgusting. But also sort of genius? As this series continues, there is no doubt in my mind that it will plumb the depths of this creepy technology and how it affects the world. It will also dive into the relationship between the different members of the Jenkins family, as they betray each other and then learn how to come together. Ask yourself what kind of person you are. And maybe keep some hand sanitizer handy.