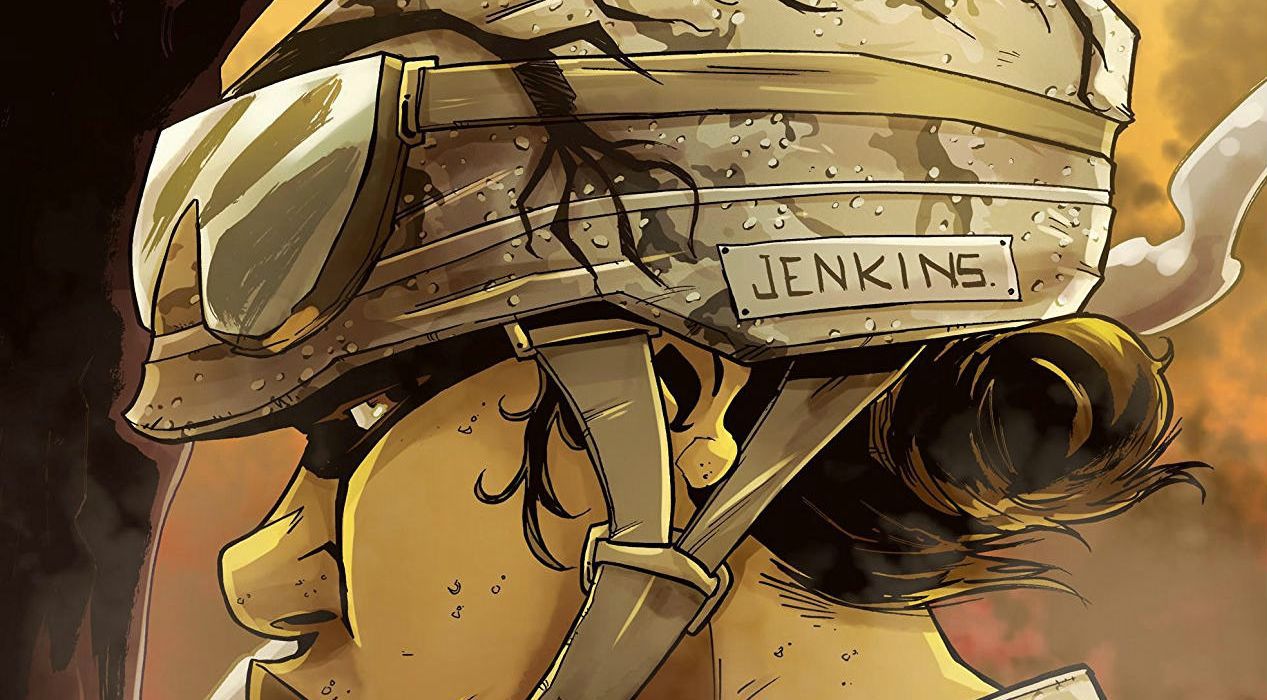 With “Farmhand” #4, the view of the Jenkins family continues to expand, giving us an issue focused on Andrea, the ex-sergeant who is now helping her father run the body part farm. But, like the rest of her family, she has some secrets of her own. 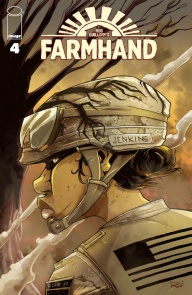 Written and Illustrated by Rob Guillory
Colored by Taylor Wells
Lettered by Kody Chamberlain
As the effects of the Jedidiah Seed ripple through Freetown, Andrea Jenkins is about to have the worst day ever. She’ll be chastised and berated, and she’ll punch at least three people by its end. Also: Zeke vs. Coyotes! Seriously!

While the main character of “Farmhand” is still clearly Zeke, over the past couple of issues the focus has expanded out to include the other members of the Jenkins family. Last issue, we got to take a closer look at the lives of Zeke’s children, Riley in particular. This issue focuses in on Andrea, Zeke’s sister, who is working hand in hand with her father to run the body part farm. Or at least, up until this issue, that was how it seemed.

With each new issue, Rob Guillory has done a good job of both peeling back the layers of mystery on what exactly is going on Jedidiah’s farm, while simultaneously showing readers more and more about the characters associated with it. This issue gives a taste of Andrea’s backstory. We get to see some of her time in the army, the accident that got her taken off active duty, and learn more about why exactly she is working at her father’s farm.

One of the most interesting pieces of her character, in this issue, is that during her accident with the army, she lost one of her limbs. But, instead of replacing it with one of the plant grown limbs that her father has been working on, she to this day has a carbon fiber leg. It’s an interesting bit of characterization from Guillory. It shows that she is hiding secrets, and the opening scene of her in the hospital helps establish to readers that we do not know as much about this character as we might think. But even more than that, it helps to what exactly her relationship to her father is. Why hasn’t she gotten a limb from the farm, unless she herself has some reservations about the work that their farm is doing?

It’s questions like these that Guillory has used to help create the world and characters of this series, to great effect. The members of the Jenkins family are all fully rounded, fleshed out individuals. And as each subsequent issue peels back a layer from each of these characters, still keeping the story relatively light, and the characters themselves pretty fun, but giving them all a depth that is refreshing. Guillory has done a great job creating a cast of interesting characters, ones that with every issue I’m excited to learn more about.

That art on this series continues to be stunning. For as much work is being done through the script and the plotting about characters, most of the credit for the life these characters have has to go to Guillory’s art. The character designs are all perfectly representative of the characters. The body language that Guillory draws make all of his characters feel both cartoony and alive. This issue takes us through Andrea’s day, and we see her casually interacting with her brother, in a business meeting with her father, and dealing with some drunks at a bar. The subtle differences in the ways she carries herself between these scenes, the body language that Guillory draws her with, brings life to the character and the scenes.

Body language almost seems like too general a term for what Guillory is doing with his characters. He is able to draw facial expressions as both exaggerated in shape yet subtle in performance. The way that he draws hands is always a pleasure to see. The small details on each of the hand’s fingers bring them to life in a strange, but fantastic way. There aren’t really any artists out there that draw the way Guillory does, and much of the series’ charm comes how unique the book looks.

The colors, from Taylor Wells, perfectly match the rest of Guillory’s art. From the few, vibrant scenes of the farm, to the clinical colors of the lab where Andrea and the employees are inspecting the body of the overgrown chihuahua from the previous issue, Wells is able to match and enhance the mood of every scene. During a late issue sequence where Zeke is dealing with a coyote, and Andrea is dealing with some rowdy bar patrons, Wells creates two different, but equally effective pallets, both conveying that they are scenes outside at night, and yet both distinct enough as to not be confused with one another.

“Farmhand” #4 shows that the series still has plenty of secrets to unveil. The work that Guillory does, both in scripting and in his art, is fantastic. The characters that we are slowly being introduced to as readers are all interesting and entertaining in equal measure.
“Farmhand” is a book that is a ton of fun, reveling in the grossness of a body part farm, while also focusing in on the deep-seated problems of the Jenkins family. All in all, it’s continued to just get better and better as the series has gone on.