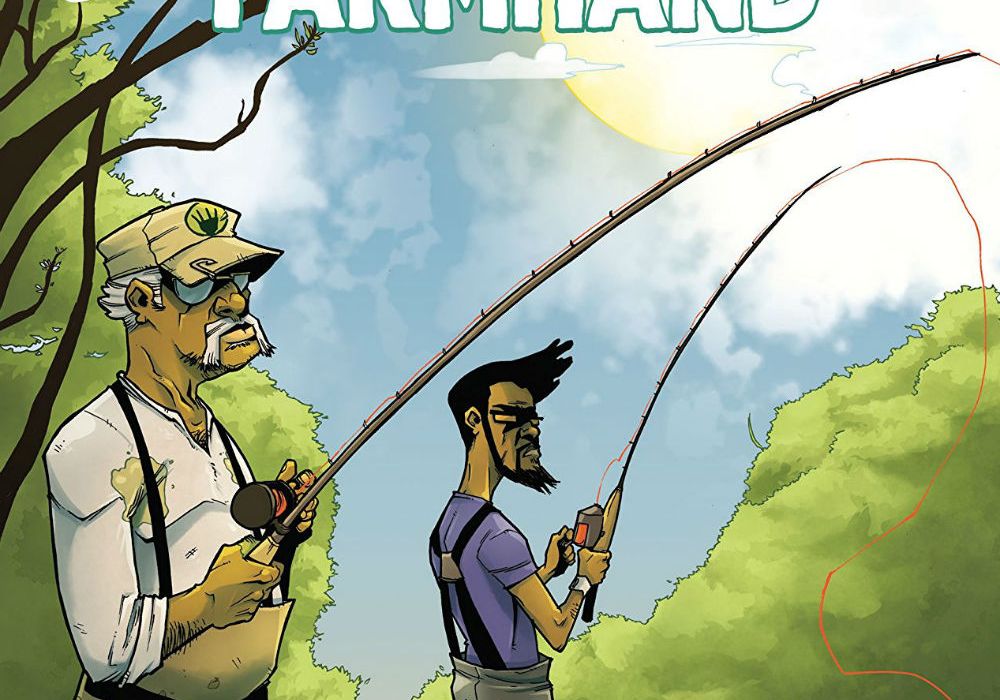 “Farmhand” is back and so are the crazy background signs! That’s it. That’s the whole review. 10/10.

Wait, you want an actual review? With measured thought? Bah, fine. But don’t expect the score to be nearly as good. 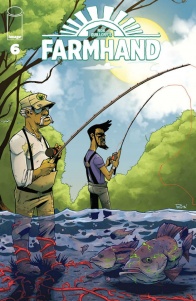 The hit ongoing series about agriculture gone apocalyptic returns for Season Two! As transplant recipients flood the streets of Freetown, Jedidiah Jenkins does the only thing that makes sense as his life’s work begins to implode: he goes fishin’.

After a short break, season two of “Farmhand” kicks off with a lot of heart, a few grotesqueries, some humor, and an ever deepening mystery about the nature of Jedidiah and Thorne’s bio-seed. It’s become clear over the previous five issues, and particularly in this one, that Guillory’s writing is vastly more serious than his artwork, producing a nice contrast of tones between the visuals and his dialogue that enhances the both of them. A panel such as the first one on page 15, where Mikhail and Jedidiah are finally able to interrogate each other in peace, is not an inherently funny one. Their conversation contains no quips, no clever turns of phrase, but is instead a very straightforward argument.

However, the way Guillory visualizes their argument shifts the tone, making the whole thing seem ridiculous instead of tense, although the whole situation is inherently hilarious. To achieve this, Guillory pushes his character models, exaggerating their rage and fury with pointed teeth, gaping mouths, and clenched fists. Were it not for this being the first panel, you’d think you’d have walked into the poster for the heavyweight boxing championship. Fire permeates the background and Wells bathes the whole panel in a light orange, really driving home the whole point.

What really makes this page, however, is the way in which Guillory allows this tone to shift once again. It is not immediate. Over the course of the pages’ five panels, he slowly de-escalates the severity of the character’s presentations. Facial expressions become more restrained, the characters are less filled with fire, and the conversation has more pauses. By panel three, Mikhail is defensive, crossing his arms, his head hanging down. Then, while the conversation intensifies in panel four, Guillory pulls back, so as to distance us from the characters’ emotions and so that, when he pulls in for a close up in the final panel, the worry in Jedidiah’s face carries with it significantly more weight.

I use this page as an example of the care that is placed into the presentation of the narrative and the character interactions. Much of the greater narrative is shrouded in mystery and while there are a few tantalizing hints as to what’s going on, and a whole lot of dread, that is not where the draw of the comic is. That said, issue #6 is a mixed bag in terms of pacing and the doling out of information. While all the scenes with Jedidiah, Mikhail, Riley, and Zeke feel like they are furthering the character’s arcs, the scenes at the farm feel like a retread of old information.

We spend three pages on a tour of the facilities and while we’re given more information about the seed that acts as a foreshadowing to the mystery of what’s happening to the wildlife in the area, it isn’t all that interesting. Not even Guillory’s always fun background details makes these scenes feel like anything but a time waster. It’s clear they serve a purpose, and are there so as not to sweep the whole thing under the rug, AND to provide the emotional context for the final page of that scene but if, while reading those scenes, I find myself asking why can’t we cut back to the fishing trip, the graveyard, or even Andrea punching the kidney mascot, it sucks me out of the story.

And that’s ultimately where the major problems of this issue lie: the story beats. Not enough are hit coming out of the break and the issue isn’t quite focused or tight enough to support the multiple threads going on at once. If the first five issues were a madcap race to establish the world, the character and the central frictions, then issue #6 is here to take a more measured approach without knowing which aspect gets the tablespoon and which gets the cup.

The other aspects of the work are firing on all cylinders, though. The lettering is the right balance of understated and playful, meshing with Guillory’s artwork without being too obtrusive. The coloring is dark when it needs to be, such as at the start, selling the dread of the reverends vision, and grotesque when it comes to the seed & all its byproducts, coloring veins with a sickly radioactive green and a bright, terrifying red. Guillory’s artwork, well, need I say more than I already have?

“Farmhand” #6 is not necessarily the strongest return for the series but it does deliver on everything that makes this series great. If you’re in for the ride already, then this will tide you over well until the next issue.

Final Score: 7.0 – Fun characters and the always wonderful and unique artwork can’t quite make up for the rocky pacing of the issue. It has plenty of heart but not enough answers and, perhaps, too much technobabble.