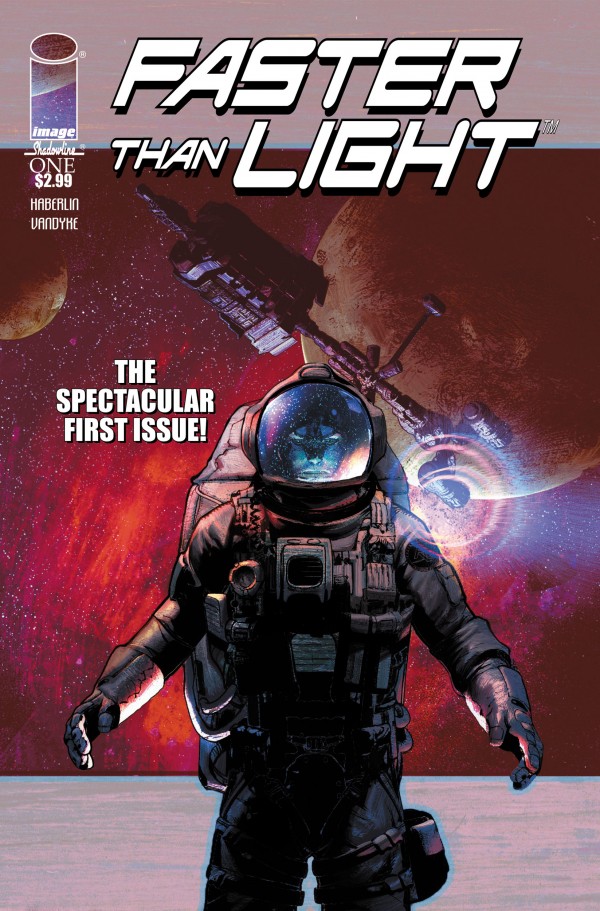 Haberlin’s sprawling space opera gets off to a stuttering start. 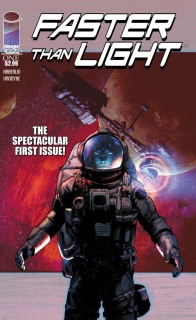 Written and Illustrated by Brian Haberlin
In the very near future we discover the secret of faster-than-light travel. Suddenly the universe is wide open to us, but are we ready for it?

“Faster Than Light” is another graphic novel that marks a recent upswing in the popularity of space adventuring comic book fare. Haberlin’s first issue is competing with the likes of Cloonan’s gothic “Southern Cross”, Morrison’s fantastical “Nameless”, and Wiebe’s psychedelic “Pisces” for the attention of fans of airlock decompression, comms failures, and other assorted deep-space dilemmas. But, while his contemporaries seem to have cut their extra-terrestrial offerings with large helpings from other genres, “Faster Than Light” is a much more straight-laced addition to the genre.

Straight out of the gates the strap-line interested me. I’m always impressed by a comic that can deliver its premise in a single sentence and yet still leave room for a reader’s imagination, and the idea of humanity struggling to rebuild its shattered position in the galaxy after the shock of newly discovered FTL travel is both a comfortably familiar starting point for any fan of Science Fiction and a broad foundation to tell all manner of stories. However, I feel like the first issue of “Faster Than Light” fails to fully capitalise on this potential.

As far as story is concerned, it’s pretty straightforward out of the gates. Captain William Forrest has been commissioned to helm a foray into deep space using newly discovered FTL technology. Heading up to the ship, which is orbiting Earth, he meets his supporting crew and tentative battle lines and alliances are formed between a host of characters who were either for or against his appointment. But then, just before they’re ready to go boldly and whatnot, a further, unexpected, discovery pulls them off course and towards something that could be infinitely more dangerous than the cold vast nothingness of space.

On paper, Haberlin’s idea feels solid enough, but the execution leaves something to be desired. My main gripe with issue one of “Faster Than Light” is that it’s feels as though there’s been a fundamental misunderstanding of the medium in which it’s being delivered. Aside from a couple of (granted, pretty awe-inspiring) opening splash panels, this issue plays out almost entirely in talking heads. Haberlin bombards the reader with dialogue that aims for conversational but, given the visual impairment that comes with an excess of speech bubbles, often ends up feeling unwieldy and invasive.

His focus on interpersonal intrigue is clearly channelling the spirit of classic space operas like Star Trek and Battlestar Galactica but, while television shows can get away with slinging chunks of information at the viewer disguised as characteristic banter, it’s much easier to overload a comic book with info dumps to the point that readers miss key pieces of information. This disconnect is probably most obvious during a round-table introduction between Forrest and some of the other members of his crew, where he is shown a brief, blurry hologram of an image that is supposed to be the focus of his mission. However, for the sake of what feels like far less significant character back and forth, this revelation is shelved and not discussed again for the rest of the issue.

What’s more, there seems to be a similar lack of vision when it comes to the structuring of the pages. While Haberlin’s art itself is strong, with a smooth, computerised feeling that reminds me heavily of Mike Deodato’s work on numerous Marvel titles a few years ago, his rigid narrative means that he’s not given much to work with visually. The IGS Discovery is a relatively straightforward spaceship, all grey corridors and minimalist furniture, Forrest and the rest of the crew are decked out in nondescript grey jumpsuits, and the majority of the panels for the entire book are two-shots of conversations that feature largely heads and shoulders, backed either by bleeping vid-screens or rolling fields of stars. These conversations, littered with slight variations of facial expressions and body language, feel small and rather limited in a medium which is used to a much more physical style of expressing emotion.

It feels as though, in his search for realism, Haberlin completely forgot that the same limitations that plague TV shows like that (i.e. huge costs for visual set pieces, set design having to conform to standard architectural rules, etc.) have no bearing on a comic. And that’s supposed to be the fun of them. “Faster Than Light” opens with an interview with Saul Fredricks, the wunderkind who cracked FTL travel. It would have been so great if this discovery had prompted a whole new kind of space-craft, both internally and externally, and could’ve opened up so much in terms of potential for this series to stand out visually. As it is though, the space station and its crew members, while seemingly all very believable, are also similarly forgettable. There is sadly little in terms of visual or characterisable flair that allows Forrest or any member of his team to stand out or feel as though they matter that much.

Final Verdict: 4.9 – A book that feels like a copy of a copy. Professionally produced, but with nothing unique enough to hang onto.