We’re breaking the first rule of Fight Club to talk about the final issue of Chuck Palahniuk and Cameron Stewart’s follow-up to the cult classic. Read on below and prepare for spoilers! 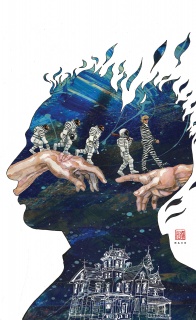 The most highly anticipated comics series of the year ends in the biggest way possible—the whole world burns away according to Tyler’s plan, and a new one he never anticipated is conceived. The meek inherit the Earth, and a final showdown proves that, finally, Roland Barthes is right!

“Full of more surprises than a Cracker Jack box, it’s a great expansion of an already strange universe.”—Fangoria

Tyler Durden was never supposed to be popular. I mean, sure the marketing team behind that one movie were probably all about making him popular. They cast Brad Pitt, after all. But in the years since Fight Club‘s release in 1996 and its 1999 film, Tyler Durden has become a cultural icon. “The first rule of Fight Club is don’t talk about Fight Club” has been repeated and dissected ad nauseaum. There’s a (very good) TV show right now that’s more or less an extended tribute to the film, and the story’s big twist is almost impossible to avoid. Fight Club, like the anarchist members of Project Mayhem, is everywhere. Off the top of my head, chanting “His name was Robert Paulson” was a running joke in my high school. Hell, I live less than ten minutes away from a bar named Durden. When Chuck Palahniuk got the idea to write Fight Club, after none of his co-workers would look him in the eye after he got his face punched in during a camping trip, he probably didn’t expect to write something that would morph into a cultural leviathan. And Palahniuk’s follow-up to the story of Tyler Durden and Project Mayhem, “Fight Club 2”, feels less like an attempt to feed the beast he created and more like an attempt at finally killing it.

To call the final issue of “Fight Club 2” self-destructive is an understatement. The story we had been building up to with The Narrator (now referred to as Sebastian, for convenience’s sake), Marla, their son, and Tyler wraps up pretty quickly with the entire world being blown to a nuclear hell. That’s a pretty bullshit ending, which Palahniuk’s friends are ready to call him out on. In case you haven’t been keeping up with this series, there have been a couple cut-away scenes of Palahniuk and his friends going over this comic’s script over glasses of wine at Palahniuk’s home. These sequences started off as small cameos that fit with the fourth-wall leaning nature of the story (it’s something that wasn’t even hinted at in the first few issues), but Palahniuk’s wine party takes center stage here as everyone questions why he would end a story like that. A smug Palahniuk explains that the nukes were actually all dummies, and that the real bombs were delivered to Tyler Durden and his followers’ lair so Project Mayhem could be killed off once and for all, along with Sebastian.

If you think that’s a dumb way to end a story that’s somehow been more disjointed and surreal than it’s predecessor — which, again, was Fight Club — Palahniuk’s fans agree. They show up to his doorstep, demanding blood in what is an amazingly paced and funny moment. I’m afraid I might not talk enough about Cameron Stewart because so much of this comic is about Palahniuk as a person and writer, but he really was perfect for this. His style isn’t something you would immediately associate with a story that’s attached to a David Fincher film, but the way he delivers the emotional moments in “Fight Club 2” (and there are a lot of somber quiet ones that pack a punch) without losing the frenetic pace that drew millions to this story in the first place is nothing short of incredible.

Anyway, Palahniuk delivers a small lecture about what Tyler Durden really means to a group of people who’ve already decided it for themselves (they’ve got his quotes tattooed and everything). In another book, this would be an unbearably vain moment but at least Palahniuk is completely honest (and very self-depreciating) about what he’s talking about. And since no one’s happy by the time Palahniuk’s finished explaining what happened in the book (“There was a book?” asks one dissatisfied fan), they all go make their own ending for Sebastian and Marla. Along the way, my favorite exchange of dialogue in 2016 happens.

Bertolt Brecht was a German playwright famous for pioneering the Epic Theatre genre with plays like Mother Courage and Her Children and The Threepenny Opera. His theory on theatre relied on the idea of the Distancing effect, where the play makes it clear to the audience that it is just that, a play. Characters will cry out the titles of scenes which are often descriptions of everything about to happen. That way, audiences weren’t really concerned with what would happen to the characters and story, so much as the moral and societal implications of the piece. I find it endlessly fascinating that this line would be included in the script because it’s the killing blow against Palahniuk’s whole argument about people identifying or falling in with Tyler Durden, in real life or in the story. The interaction between reader and the fiction is, in the end, much more important than the one between creator and reader.

Unfortunately, Palahniuk and Stewart didn’t do much to explicitly set up a Distancing effect for themselves, which makes this whole ending where we talk about Palahniuk’s career and whatever, feel like a cop out to some degree. As a collected edition, I can see this story and its subsequent deconstruction running pretty smoothly. But when stretched out the course of ten issues, not keeping the promise of a story some of us bought into almost a year ago feels like a small sort of betrayal. That’s not really a criticism of the content, as much as the medium, but it is worth pointing out. Frankly, I can settle for “Fight Club 2’s” ending considering the implications it has, both for future “Fight Club” stories and Palahniuk’s career in general, while also making a great callback to the original book to a devastating degree.

So is “Fight Club 2” an egotrip for Palahniuk? Yeah, totally. But when taken into the greater conversation about Fight Club and what it means, both to those who read it years ago and to a generation like mine that has never known a world where it wasn’t a cultural landmark, “Fight Club 2” is a brilliantly clever cautionary tale about the stories we tell and how they will outlive us.