Titan Comics, famous for bringing obscure gems back into the limelight, have dug up a Joe Simon and Jack Kirby property from the archives to be tightened up and refreshed. “Fighting American” is a classic Kirby and Simon design, but is it unique enough to live in a modern setting? And can the creative team make this Klassic Kirby Kreation feel fresh? 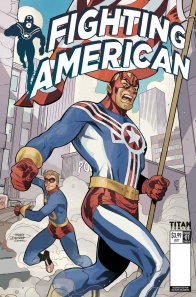 Cover by Terry and Rachel Dodson

Direct continuation of Simon and Kirby’s classic series! Fighting American returns!
Written by Gordon Rennie with artwork by Duke Mighten, with a cover by Terry and Rachel Dodson!
When the 1950s heroes find themselves trapped in the modern world, how will they handle what society has become, and what dangers will they face?
With modern-day villains to contend with, enemies from their past pursuing them, and a whole new world to come to terms with, what daring adventures could Fighting American and Speed-Boy find themselves in now?
Goes on-sale October 11th, Joe Simon’s birthday!

I’m really glad this went in the direction that it did. Instead of opting for a thoroughly modern reinvention, Gordon Rennie plays up the camp aspect of Jack Kirby comics – especially considering Fighting American is from the awkward 50s years of superhero comics. Fighting American speaks like… well, what a fighting American man might sound like in the 50s. The important thing to note is that there’s dialogue choices that distance him from being an obvious Captain America. Fighting American feels more like the stubborn, chauvinistic Dad of old times. Several times he tells Speedboy to cut the ‘Beatnik-Talk’ to great hilarity. I must also note that Rennie tactfully doesn’t go into gender equality related issues of the 50s, to his credit.

Rennie works great on the setting details of the 21st century through Fighting American – and to an extent, Speedboy’s eyes. When the communists and our heroes first enter the 21st century, both remark on a distinct lack of ‘rocketships’, to good comic relief. Further on in the book, we see a little character development in a Speedboy as he eyeballs a giant advertisement of smooth female legs. It’s these little touches, especially through the awe-studded eyes of these characters, that feel weighted. However, I feel some of the use of modern language to be a bit on the nose – later on, Fighting American refer to people calling him ‘butt-hurt dweebs’ and ‘cosplay losers’ which feels somewhat forced. I think people are more accepting of nerd culture, and furthermore, Fighting American is a pretty well-built guy that wouldn’t necessarily garner that type of comment.

Rennie drops some solid bombs to keep me hooked for the rest of the series, which could’ve easily felt like a cash-in and gimmick. Both Fighting American and Speedboy are cautiously optimistic towards the 21st century, an idea that has never been truly explored. It seems like both of the characters are hiding their flawed, dated personas underneath an overtly masculine mask, and that just begs to be explored in further issues. But what I love is how the realistic and mundane aare portrayed in this issue. Fighting American and Speedboy are forced to stay overnight out on the raining street as their previous lair was demolished. It’s a bittersweet scene as they hobble as other vagrants do between cardboard boxes, with Fighting American making sure Speedboy is covered instead of himself. Similarly, I love that they’re not excused for their reckless actions simply for being superheroes. The issue ends with the police catching up to them – leaving a cliffhanger that I’m genuinely not sure how it will be resolved.

Duke Mighten does a great job at combining the dynamic, heavy posing of Jack Kirby and the sleek lines of modern superhero comics. Every scene that Fighting American pops into, he does so with that classic Kirby-style lunge that propels the scene forward so well. The first few pages feature our protagonist kicking and slugging communists with considerable weight added to the blows, but what I find unique is that they’re show at almost 3D angles. When Fighting American kicks a communist in the side, the communist flies out of the panel with a surprising amount of depth. I can also see Mighten is going for a Kirby style with the exaggerated facial expressions, but doesn’t stick the landing as much. There’s some that feel brilliantly cartoonish (take Speedboy gazing up at the advertisement with an ear-to-ear grin, for example) but then some that looks a little awkward (Fighting American looking mid-belch as he blindly reaches behind him for a cosplayer’s hammer)

There’s some strikingly modern panels here that compliment the all-out silver age action, too. The lower angle shot of Fighting American and Speedboy riding the hood of a family car feels so dynamic, and looks like something out of a Bourne movie. Later on, there’s a shot of Fighting American smashing onto the top of a Taxi that is really well layered and structure – there’s a lot of depth to the panel with Fighting American appearing as the focal point. Mighten makes this balancing of the camp and cinematic work well, with some Bryan Hitch influence clear in some of the more widescreen style shots. What’s really interesting is the polarising black and white photographs at the end of the issue – tonally, Mighten gives the issue a Thriller/Noir tone as we see a young psychopathic ‘sidekick’ type character brutalise the protagonist’s ‘professor’. The way they are shot, and hung at different angles on the page accentuates Mighten’s ability to alternate genres smoothly.

Tracy Bailey does a very serviceable job on colors for the issue. There’s a tricky line to balance with issues like these – you have to acknowledge and represent the simple four-color palette of the era, whilst balancing it with more complex modern coloring techniques. A lot of scenes balance this well – the explosive splash page of Fighting American and Speedboy jumping from a time-portal uses modern lighting, but on top of the bright silver-age color scheme. But I find there’s not a lot of distinction between day and night, as the bold vibrant colors cut through too much. The only difference between the two appears to be a black background for night, with a blue background for day – the color palette isn’t darkened or lightened drastically for any particular setting. It’s a shame because it betrays how well executed that first splash page is, but for the most part there’s a lot of nostalgic fun to be had with Bailey’s coloring.

“Fighting American” #1 is an interesting beast. It simultaneously homages the great comics of a bygone era, whilst also poking a little fun too. The plot is well-structured, and sets up a great cliffhanger, and for the most part the art team gives us an exciting hybrid of modern and silver-age comic art. Keep an eye out for this one.

Final Verdict: 7.2 – “Fighting American” #1 is a both a great homage and parody of the comics of old, whilst also dishing up an intriguing time-displaced hero plotline to keep you interested.