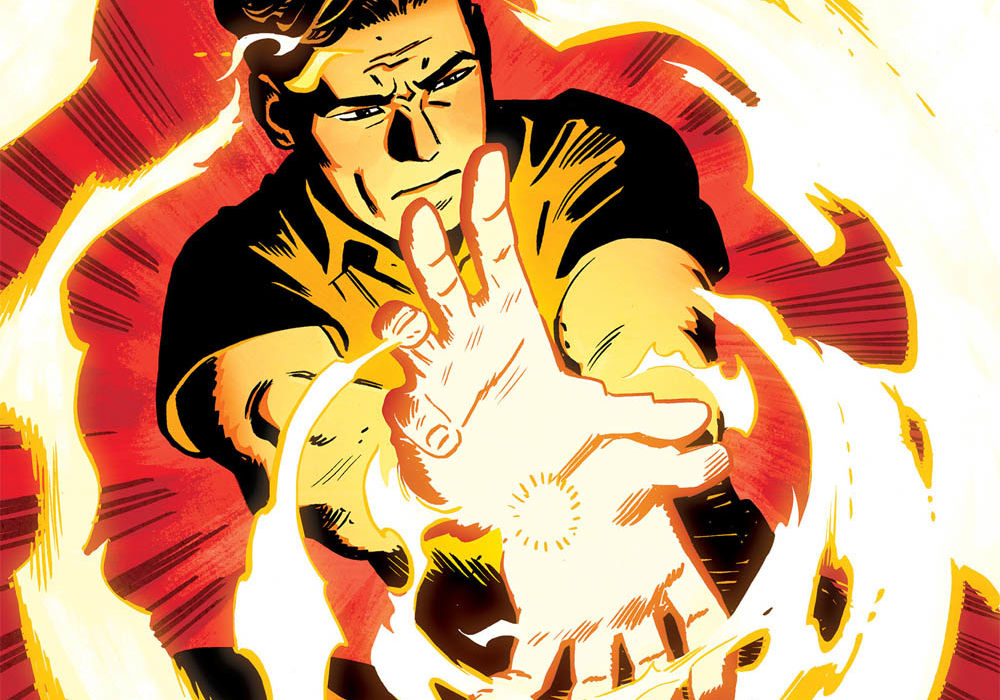 Chris Samnee and Matt Wilson are the standouts to a pretty standard first issue in “Fire Power” #1.  Beware spoilers! 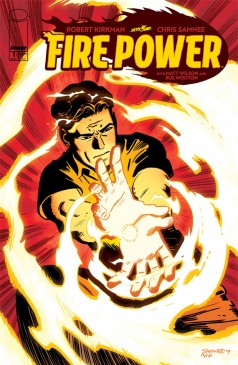 The one who wields the fire power is destined to save the world, but Owen Johnson has turned his back on that life. He doesn’t want the power—he never did. He only wants to spend time with his family and live his life, but unseen forces are at work to make that impossible. Danger lurks around every corner as Owen’s past comes back to haunt him.

Robert Kirkman, Chris Samnee, Mathew Wilson, and Rus Wooton’s “Fire Power” #1 is nice too look at but doesn’t necessarily go above and beyond the expectations of a first issue. If you read the solicit text above this paragraph, you essentially have the plot of this issue. The presentation is done well as Samnee and Wilson are an excellent combo and Wooton’s lettering is unique and impactful, but overall Kirkman’s script doesn’t do a whole lot to grab readers who may not be familiar with the preceding graphic novel.

Kirkman’s script focuses on the “normal” life that Owen Johnson lives, by setting up his family, his neighbors, and his parents–essentially establishing the life he doesn’t want to lose when his martial arts past comes back to his door. Kirkman establishes the relationship with Owen and his daughter well enough, giving them a fun race and then him being supportive about her little relationship (although the “we’re having a baby” joke feels weird considering how young she’s drawn to be). The rest of the family are kind of standard with the son being a phone-loving gamer and Owen’s wife being the archetypical wife and mother, stressed about the party– except she’s also a cop, which is y’know–but also serves to paint Owen’s career as a furniture salesman as much less exciting. Another cop, whom I assume is her partner explains to their daughter how to get away with murder which is a joke that has NOT aged well at all. Owen’s parents show up to give a little exposition, well woven into dialogue, and a conversation between Owen and his mother conveys the theme of time with family being precious which gives the set up of the family as something to lose some weight that otherwise it was missing.

In between the domestic set up, Owen is visited by Ma Guang, a person from his past who informs him of developments since the graphic novel which leads to Owen meeting him at a football field and Ma Guang telling him Owen’s former lover was killed and he’s being framed. Owen rejects trying to sort it out and maintains being done with that life–except there’s a ninja that’s been stalking him that might make that null. These sections give enough information to tease the expanded story from the graphic novel without making it essential. As it is here–we can understand that whatever happened is the past Owen is leaving behind. However Owen turning down the chance to clear himself of being a murderer really feels as “the hero rejects the call of adventure” for “the hero rejects the call of adventure”‘s sake. While Kirkman has done a decent enough job of showing Owen being devoted to his family and abandoning his past, the stakes of being framed for murder feel high enough that it would make more sense for him to take this first offer as opposed to what will predictably happen with the ninja attacking him and his family at home and THAT being what draws him to action. The second issue is out right now, but I assume that’s what happens and it feels just a bit contrived to separate these two beats.

Samnee and Wilson are always an excellent pairing and they do really well with what they are given in “Fire Power” #1. Wilson’s colors of the family scenes are vibrant, warm, and inviting–really invoking a sense of suburbia. Wilson continues telling the story with the colors with the night time meeting and the fight that occurs by drenching the commute and the dialogue in a wash of blues and shifting the action to pale oranges they come together for the fire ball effect. Samnee’s linework and page layouts also elevate the script with the expressive faces of Owen’s family giving off a sense of familiarity with one another. The acting of the figures has an excellent sense of clarity and warmth which sells this domestic life a bit stronger than the script does. Later on in the book, Samnee does the opposite to a great effect in depicting Owen going to the football field. Along with Wilson’s colors, he presents him as a cold, isolated figure silhouetted as he re-enters this part of his life. Samnee’s page layout for the fight are also notable, not in that they are extreme, but in the way, it breaks with what he sets up for the rest of the issue with the fight scene’s being diagonal as opposed to his mostly horizontal approach for the rest of the book. The fight also makes ample space for Rus Wooton’s sound effects that do an excellent job conveying motion and image and feel at home in the artwork. Ultimately this is an art team that is excellent at conveying a story and here it is no different.

The main issue with “Fire Power” #1, for those not familiar with the graphic novel, the story of this first issue is nothing new at all. The archetype of someone who has left their “supernatural” life behind to start a family and being brought back in because it’s a threat has been done so many times, and this book doesn’t necessarily do enough add to that story. There could be something said with regards to representation with Owen as an adopted Asian-American and the “supernatural” aspect of his life being tied to his ethnicity. There could be an interesting story about assimilation challenging Owen’s suburban life and cop spouse, but I certainly do not trust this all-white creative team to explore that in a meaningful way. This issue is told by people who know how to tell stories really well, and if you want to see the solicit text told over these pages without any more depth and Samnee and Wilson artwork then “Fire Power” #1 is that book.

Final Verdict: 6.5 – “Fire Power” is the “I started a family but oh no my past is here” story without any huge reinvention but excellent art.