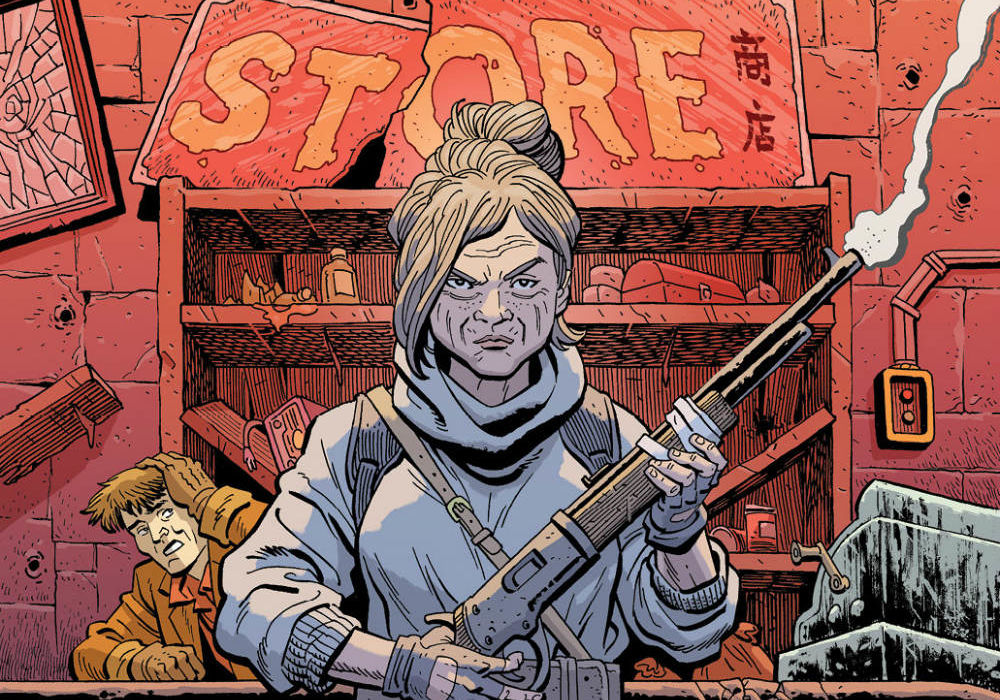 Captain Malcolm Reynolds is an interesting character with a very specific quirk that is pretty noticeable if you’re an obsessive fan of the show, movie, and comic book series like I am. He’s got a kickass lady soldier for a second in command, a kickass lady courtesan as a best friend, a kickass lady engineer to help him stay in the air, and finds himself babysitting a kickass brainwashed lady super soldier. Plus, if you have been keeping up with the ‘Firefly’ comic you’ll find he is being hunted by a kickass half cyborg lady bounty hunter.

Now, with the publication of “Firefly: Outlaw Ma Reynolds” #1 we get to meet Captain Reynold’s mother, a kickass lady thief who has no issue fighting for what’s hers and shooting anyone who threatens to take it away from her.

I’m beginning to think Captain Reynolds has a type. 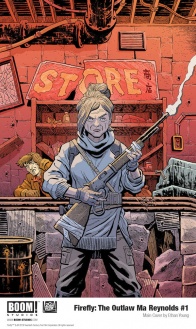 After the shocking conclusion of Mal’s journey with Boss Moon, Mal hands himself into the Alliance…but it turns out its not him they want.
The infamous Ma Reynolds is at the top of the Alliance’s Most Wanted, and if Mal doesn’t get to her first, the Alliance will!
Kicking off a new year of Firefly, discover the secret history of Mal and his mother, and what that will mean for the rest of the ‘verse…and a new brewing war to end all wars.

The story of “Firefly: Outlaw Ma Reynolds” #1 follows everyone’s favorite Browncoat captain Malcolm Reynolds as he is given an ultimatum by an Alliance judge: help the law find and capture the notorious outlaw and bank robber Maude Reynolds or spend at least twenty years behind bars for the various crimes he’s committed against the Alliance. Unfortunately, Maude Reynolds turns out to be Malcolm Reynold’s mother, and the situation sets up a prime opportunity to flash back to the past and learn how little Malcolm grew up.

It turns out that Malcolm’s mother was somewhat headstrong and had a knack for fighting to protect what she thought was hers and taking whatever she wanted when she felt she was wronged. Apparently the apple doesn’t fall far from the tree.

Greg Pak continues his run on the ‘Firefly’ comic book series, and “Firefly: Outlaw Ma Reynolds” #1 continues to showcase Pak’s talents as a writer. While it certainly helps that Pak has been given forty pages to play with instead of the standard twenty to twenty-two, Pak deftly combines elements of classic westerns, sci fi action, and a heist story with some fantastic character work and heart wrenching family drama that feels very real and very personal. The story deftly jumps between the present with Malcolm hunting his mother down in a violent game of cat and mouse and flashbacks of Malcolm’s childhood, which provide quite a bit of insight into Ma Reynold’s character and goes a long way towards explaining why her son grew up into the man that we all know and love.

If the writing has any problems, it’s a tiny little niggle with the way Pak writes Malcolm. Specifically, Pak presents Reynolds as a man who seems to be a bit too eager to work with the Alliance, the organization he has spent a good chunk of his life fighting against, in order to bring his own flesh and blood to justice. Granted, Malcolm has his reasons for working with the Alliance, and there are some unresolved issues between him and his mother that might push a man to go the extra mile in bringing her in, but it is kind of jarring to see the rebellious face of the franchise agree to work with his most hated enemy so quickly.

Speaking of characters not looking exactly right, the artwork has a few moments where some of the characters look a bit off. Artists Davide Gianfelice and George Kambadais combine their talents to create a sketchy anime style of artwork that makes the characters in the comic a bit difficult to associate with the characters from the show. While the only two characters from the original show that show up in “Firefly: Outlaw Ma Reynolds” #1 are Captain Reynolds and Inara, they look just unfamiliar enough from their real life actors to break the immersion of the story.

Thankfully this break in immersion isn’t really a big deal, and what the art lacks in facial recognition it more than makes up for with emotional range, atmosphere, and action. The art makes great use of exaggerated emotions in order to lend weight to the tragedy of a boy hunting down his mother, the setting captures the gritty Western spirit mixed with the faded science fiction elements that the franchise is famous for, and the action is beautifully dynamic and engaging to look at. The whole thing feels appropriately rough and tumble and while we will probably never get another season of the ‘Firefly’ tv show, the comic proves to be a worthy successor.

“Firefly: Outlaw Ma Reynolds” #1 is a great comic and any critiques in this review are small enough to be ignored. It’s a well told and well-drawn story that upholds the legacy of the ‘Firefly’ tv show and adds to the lore of the universe by delivering a solid character study of the lady that raised one of the greatest space outlaws in science fiction.

Final Verdict: 8.8-While die hard hardcore fans of the show might have a few issues with the way Captain Malcolm Reynolds is portrayed in the comic, it more than makes up for it with the introduction and backstory of Ma Reynolds, who would have made a great character in the tv show.