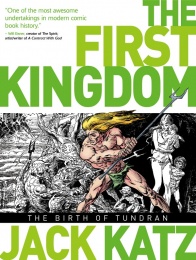 An unforgettable epic, the work of a lifetime, is finally collected in an ultimate, six-part library!

“Our choice: the caves or the stars…” – Jack Katz

Jack Katz has been called all of these things since he began his illustrated magnum opus in 1974, creating a tale that follows in the vein of a futuristic, post-civilization The Odyssey or The Iliad!

Now, exclusively from Titan Comics, comes this long-lost treasure from the golden age of comics creation – as it’s never been seen before. Remastered and packed with exclusive features, this sumptuous volume collects the first part of a tale for which the term ‘epic’ was invented!

Remembered fondly by those reading along with its creation, “The First Kingdom” can be best summed up as a classic, a fascinating time-capsule of the underground/direct market of his day and the risk he took with this book, as well as the book that provides a counter-narrative to Eisner’s about the formation of the term Graphic Novel. First serialized back in the late 70s, Jack Katz’s “The First Kingdom” is a sword and sorcery tale like no other, slowly evolving into a science-fiction epic over the course of six volumes, with a healthy dose of philosophical musings mixed in. In this first volume, however, those aspects have yet to truly develop and instead Katz treats us to six issues of that archetypal pulp comic best exemplified by Tarzan and Conan the Barbarian. There is a lot to love about “The First Kingdom’s” inaugural volume but there is also a fair amount that will be challenging to many readers, myself included.

For one, this is not a parody, satire, commentary on or reinterpretation of the sword and sorcery tropes or style but rather an earnest example of those trappings in action. This means that it doesn’t have the same reflexivity that Aaron/Asrar’s “Conan” has to the genre nor the wild abandon of something like “The Adventure Zone.” Names like Hellas Voran, Aquare, Darkenmoor, Terog and Deuvean Parganna litter sentences, while plots that focus on gods falling in love with mortals, and oracles that foretell of a father never seeing his son should he continue following the path towards kingship form the scaffolding of the story. Women in nothing but a loincloth, breasts out, 8 pack abs on display and Men in nothing but a loincloth, with long flowy hair and 6 pack abs on display kiss like it’s their first, and final, time to embrace, all portrayed in black and white, with lush backgrounds that emphasizes the “primitive” time, and how much better, wilder, and worse it is.

Katz’s narrations are more purple than a petunia and denser than a dwarf star. He packs as much exposition as he can into every bit of narration and dialog, layering it in omniscient warnings and grandiose terms. The lettering is clear, measured and rounded though it is small, most likely because there are no balloons and no gutters to allow the words to expand, the art filling in as much of the page as possible instead. For those reading digitally, you will want a large screen or to take advantage of a guided panel view in order to comfortably read these essential pieces of the book.

This makes, unfortunately, for a very slow read. Moreover, as you descend farther and farther into the comic, this slower pace comes into conflict with the actual events of the text, which are moving at a rapid clip through Darkenmoor’s life, painting a picture of generational events, the divine right of kings, godly politics, and the folly of “civilization.” It’s a lot to take in. Even with all those words, it isn’t always intelligible, although this volume is by far the most straight-forward of the six, and the story isn’t particularly new or unique. Again, “The Birth of Tundran” is at least 45 years old at this point with an even older sensibility, and that may make it difficult for a modern reader to appreciate or even enjoy the story.

Yet, as a modern reader myself, there is something special about the book. The hyper-dramatic, soap-operatic nature of the genre is on full display, which is often a turn-off, but Katz sells every, single panel of it. Sure, his narration is heavy-handed and overly wordy, yet you need those words to grasp the scale of the conflict and the intricacies of the characters’ relations to each other. Certainly the characters are defined by a singular trait, and often the women of the book are written even flatter, yet it is hard to criticize the flatness as they are meant to be archetypes rather than people, stand-ins for ideas, though one can still make the case for the poor treatment of women in the book as compared to the men as a major detraction; a product of its age as much as the genre it is a part of.

Why is it that a book such as this works when so many others don’t? I believe that it comes down to Katz’s art.

Katz is clearly a master at the craft; it’s impossible not to appreciate the pages of “The First Kingdom.” Say what you will of the story or the characters or the writing, which. . .I kind of already did just above, the art rarely falters. Strip away all the dialog and narration and you can still gather the basic story and, often, the comic is better off. Doing this highlights how the dialog is a vehicle for philosophical musings rather than character or plot developments while the narration is an added framing device to clue us into names, places and an added sense of grandeur which borders on swallowing the art it’s meant to support.

Katz’s panels are each a classical painting: idealized bodies and full backgrounds, heavy in inks and exaggerated in posing, without ever losing anatomical rigour. Even the characters that break our perceptions of what is real, such as the dragons Darkenmoor regularly hunts or the gods of Helleas Voran, with their almost aquatic look, retains the consistency and solidity of the regular humans. There are many places where I would have preferred to lose the overwhelming prose, letting the art speak for itself, but, again, it tends to work more often than not.

Katz does have a problem with faces, in that there are only slight differences within each “class” of characters, if you will. It is more pronounced in his background or incidental characters. Take the designs of the male “gods” of Helleas Voran, Ogsoltaman and Aquare. There is enough to differentiate between the two using the spires on their heads, their height difference and skull shapes but when in close-up, without the caption and dialog, I’d be hard-pressed to tell you which was which. It’s not same-face syndrome but it is a result of being so slavish to anatomical consistency without diversifying the references enough.

Ogsoltaman looks wildly different from Dranok, who has a God from Michelangelo’s The Creation of Adam look going on, and both look wildly different from Darkenmoor, being almost 4 feet taller than his 6 feet, the unnatural tallness and lankiness selling their presence as imposing and fundamentally different from the people on the ground. It harms the readability of the comic if you’re trying to puzzle out by art alone but he makes up for it by never having an understated pose or facial expression. That is where the characterization and differentiation lies.

This all begs the question: who, then, is this book for? The things that make it different from other Sword and Sorcery comics of its era — the heady philosophical musings, the high levels of nudity and sex, a complicated, far-reaching plot told over multiple, over-sized installments — aren’t as special anymore and the book itself is bogged down by its aged approach to storytelling and reliance on played out tropes. Moreover, there is woefully little diversity of any manner throughout, the closest we get to a female main character showing up in the next volume.

The art is still something to behold, and for me was worth the price of admission, and the commentary on cycles of violence remain relevant today, but one has to slog through all the rest to get there. Moreover, the series’ strongest moments have yet to happen and for those who want to see “The First Kingdom” at its finest, have to get beyond his early struggles in this volume, even as many of the problems remain. That’s a tough sell.

If you’re looking for a book that perfectly captures the intersection of indie-underground black & white comics and traditional Sword and Sorcery, this book is a must read. If you’re looking to read an under-recognized classic, important for historical value yet perhaps not as relevant or enjoyable to a modern audience, give this a look. If you’re looking to stare at near naked men and women passionately hunting, fighting, kissing and debating whether or not we’re pre-programmed and cannot escape our innate programming, you’re in the right place.

Everyone else can probably give this series a pass.