At this point it’s no secret IDW has been exploring nearly every aspect of the Hasbro Universe that they can think to cover. After the Transformers, M.A.S.K., Rom, Micronauts and G.I. Joe properties united in the “Revolution” crossover from last year, IDW is combing all the series for yet another comic book crossover event in “First Strike”. By the time each aspect of the conflict was introduced in the pages of “Revolution”, the story lost focus and the aspects about what made each franchise great.

IDW’s more stripped back “Rom Vs. Transformers” story showed potential a few weeks ago and made a great case for the shared Universe. Since readers are slightly more familiar with the characters and how they work together does “First Strike” have a chance at greatness? Will this be the storyline which finally balances over four disparate toy properties in one unique and engaging narrative? 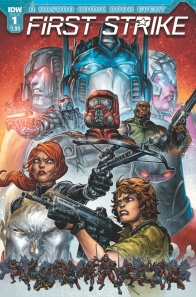 A Hasbro comic book event! A new era of peace is dawning as Earth formally joins the Cybertronian Council of Worlds. That is… until Baron Ironblood joins Destro, Storm Shadow and other nefarious villains in a terrorist attack on Iacon! As chaos takes hold on Cybertron, it will be left to Scarlett and the rest of G.I. Joe on Earth to discover the true purpose behind the attack before both worlds descend into all-out-war!

Ever since “Transformers” #50, IDW has been dedicated to exploring Optimus Prime’s quest to protect the Earth. The Transformers have finished their huge Civil War and the new status quo has been Prime’s new directive. Placing the Transformers on Earth has caused them to mingle with more G.I. Joe and Hasbro heroes in a more natural manner. Digging deeper into some of these aspects is definitely a good idea, but with the last year of “Optimus Prime,” I do wish that the core plot surrounding this new development would start to change at a more rapid pace. “First Strike” makes a couple of teases towards those new aspects but only features the Transformers as window dressing in this debut installment.

Dunbar’s art feels very green in the debut chapter of “First Strike”. The figure work in the lead story is all over the place but Dunbar’s faces are the most disappointing addition to the comic. The faces alter from panel-to-panel and make the title feel like a rush job. The more exaggerated style employed by Dunbar is much too simplistic during the scenes with G.I. Joe’s. The backgrounds are extremely sparse and the minimal detail towards the end of the book is extremely disheartening. The inconsistency in the illustrations carries over to the Transformers who look incredibly during some scenes and lack detail in others. As with the human cast mentioned above, Dunbar’s facial work with the characters is inconsistent and disappointing.

The G.I. Joe heroes featured in the title have an extremely thin characterization from Mairghread Scott and David A. Rodriguez. The personality of each Joe starts blending in with the others after just a few pages. Since the bulk of the narrative is spent with these characters, this is a major flaw in the writing which deeply holds “First Strike” #1 back from being something special. However, when the team begins the big exploration into the fight between the Transformers and Baron Ironblood, even their role of the narrative becomes slightly interesting.

The solicitations tease something interesting with Baron Ironblood and familiar Joe villains like Destro and Storm Shadow. If you only read the feature in the issue, their presence in the story would feel entirely underwhelming. However, the second story in the book adds a lot of depth to the villains. Writer John Barber introduces lots of new dynamics and political aspects of the rogues which is not present in the main story. Some bits of the dialogue between the baddies does come off as tongue-in-cheek but the story is written confidently enough to downplay the minor flaw. Penciller Netho Diaz’s more fully-featured pencils also make this part of the book the stronger narrative. His confident body language and consistent facial expressions makes this story very entertaining.

Getting to know more about the different allegiances and motivations of these supporting cast members added a lot more depth to the story and I wish the main comic had the same level of intrigue. While there is a small fraction of the political aspects about the Transformers annexing Earth that is explored, this happens only at the surface level. The Joe’s also make reference to being scared of living in an Earth where the Transformers are a major presence because of the violence surrounding the Cybertronians. I hope Scott and Rodriguez find a better way to mash all these characters together in future issue while following up on some of the groundwork established by Barber in Diaz in the back-up–“First Strike” still has a lot of potential.