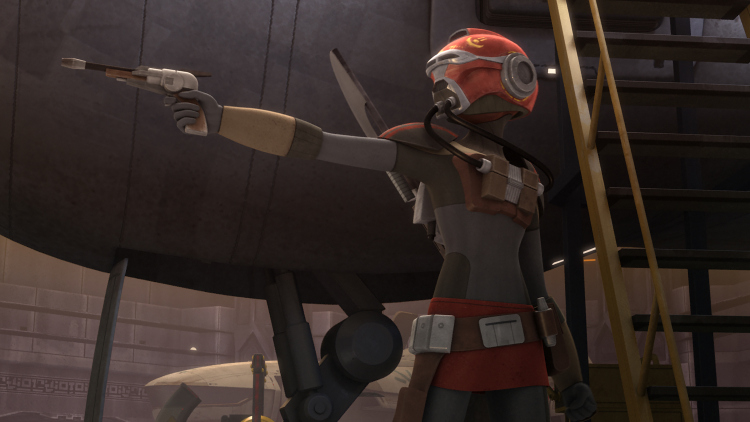 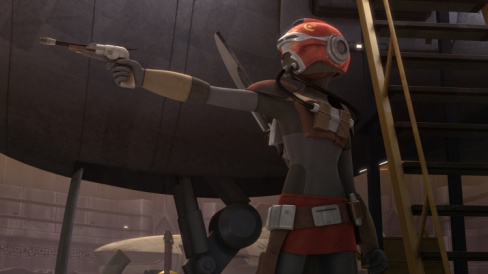 Much like last week’s episode focusing on Hera, things are slowing down to take a look at the past of the mysterious Sabine Wren as a figure from her past emerges and tries to foil a Rebel mission.

Let’s get to the thoughts for this week’s episode, shall we? Also spoiler alert, just in case.

Let’s get this out of the way: this was a really fun, really interesting standalone episode, much like last week’s, and the reason for that is that it’s finally an episode that focuses on a member of the Ghost crew that’s most been in the background before now. While last week focused on Hera, this week focuses on Sabine. Now, Sabine’s always been the most mysterious of the Ghost crew. Even with Kanan’s whole Jedi backstory, we know so much more about him and the rest of the crew than we do Sabine. This episode kind of gets into her backstory a little bit thanks to the introduction of Ketsu Onyo, a figure from her past.

We already knew that Sabine was part of the Imperial Academy on Mandalore before she joined the Rebellion, but this episode reveals through Onyo that Sabine did some time as a bounty hunter in between there. I feel like this wasn’t much of a shock as the majority of Mandalorians that we know in canon (their name rhymes with jet) are also bounty hunters, but this does add an extra layer to the character and gives her a personal connection outside of the Ghost crew which I really appreciate and I hope is explored more down the line.

As soon as I clocked that Ketsu was voiced by Gina Torres, I knew I was going to love this character. Thankfully, she didn’t disappoint as throughout the episode she was a badass, hardcore bounty hunter who was determined and versatile, but who had a genuine emotional connection with Sabine. We saw her go from mysterious masked figure to an estranged friend to someone who could be reconsidering their path in life thanks to reconnecting with Sabine and I think the episode showed that transition in a very natural way that never felt rushed despite the half hour run time.

Something else I thought was cool was Dave Filoni revealing on Rebels Recon, which is an invaluable resource for this column, that Ketsu’s design was originally for a character in The Force Awakens that he grabbed when no one else was going to use it. I’m pretty convinced that her helmet was probably an option they were considering for Kylo Ren, but I’m definitely glad it found it’s way her as it feels a lot more bounty hunter-ish and even reminds me of Leia’s Boussh outfit from Return Of The Jedi.

From the showdown in the hangar between Sabine and Ketsu to the threeway battle between Sabine and Ezra, Ketsu and the Stormtroopers to the conflict between Ketsu’s ship and the stolen shuttle, this episode was really action heavy and I definitely appreciated that. This series has gotten a lot better at showing dynamic action and fight scenes with some clever directing and choreography to capture that Indiana Jones-esque pulp-y feeling that was a part of The Clone Wars.

I feel like the success of the first season has allowed this season to experiment a little more and as I noted last week with some of the shot choices being pretty new, I really appreciated the extreme close-ups of Sabine and Ketsu’s helmets when they first encountered each other. It’s the kind of shot that’s rare in this style of animation and the fact that this show is experimenting with camera angles outside of flat mid-shots is something that just adds that extra layer of enjoyability to the show.

Confession: I hated Chopper in the first season. His whole character of being R2-D2 if R2-D2 was an asshole grated on me really quickly and felt like an easy route to some forced conflict if the writers needed to pad out a scene a little longer. This episode, thankfully, utilised him much more like the Galaxy’s Greatest Astromech and had him actually contribute to the episode, have some humorous banter with the Gonk droid in the episode and, for once, not spend an entire scene being chased by Ezra around the Ghost.

If this season can actually go about making me like Chopper as a character, that just proves that Dave Filoni is a miracle worker.

Speaking of the Galaxy’s Greatest Astromech, R2-D2 showed up for a scene! Yeah, that’s pretty much all I’ve got for this thought, but I do like the recurring reminders that R2 and C-3PO are working for Bail Organa during this time and will, at some point, end up on the Tantive IV. It’s the kind of cameo that reminds of just how this series links to the overall narrative of Star Wars in that weird kind of way of seeing the patchwork of this giant, space-faring quilt come together. It’s a reminder that this show isn’t just a self-contained narrative, but that the actions of these characters ripple throughout the galaxy and affect the lives of those we see in the films.