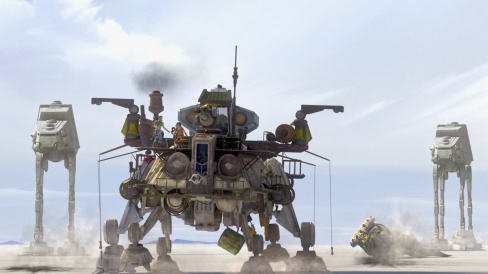 Welcome back to Star Wars: Rebels! This week is the second half of a two-parter that started with last week’s “The Lost Commanders” episode. If you haven’t already, go watch that and read my thoughts on that episode before diving into this episode’s thoughts because here be spoilers.

Last week, we saw the Ghost crew come across some old favourite characters from The Clone Wars. Well, one favourite character, Rex, and two others that I had to look up on Wookieepedia because I had forgotten about them. I mean, can you blame me? Gregor was only in one episode. But, regardless, it was really cool to see the clones again and see them in an all new light as they hid out in their old age in an RV that they used to go fishing.

This episode, we got to see the clones back to their old tricks as they take on the might of the Imperial walkers. This was especially cool as it was pretty much a case of the Prequel Trilogy versus the Original Trilogy as the clones, in the AT-TE, fought off three prototype AT-ATs. Not only was this cool to see, but it was staged and directed amazingly as it kept the clones and the rebels on the back foot against overwhelming Imperial numbers and forced them to think tactically in order to overcome the odds. That’s pretty much Star Wars 101 right there.

Not to mention, the whole sandstorm sequence being an extended homage to the climax of Wrath Of Khan had me straight up giddy and centred the episode around an amazingly staged action setpiece.

Between his ongoing comic series and these past two episodes, Kanan Jarrus is getting way more depth than that goatee/ponytail combination deserves. Have I made that joke before? I feel like I’ve made that joke before. Nevermind, the point is that after last week’s episode focusing on Kanan’s animosity with the clones after his experience with Order 66, this week we get to see him somewhat reluctantly leading the clones into battle.

It’s interesting to see this dynamic develop as it’s a far cry from the Kanan we were first introduced to, who would have done anything to hide his past as a Jedi. The trauma he experienced as a boy because of Order 66 set him on a path where he had to fight, lie, cheat and steal in order to survive, but now we’re seeing him slip into not only the Jedi ways of old, but also the General status that his master had before Order 66. It’ll be interesting to see how this develops in the coming conflict against the new Inquisitors.

3. Give Hera Something To Do, Please

This thought could be changed to “Give Everyone Who Isn’t Kanan And Ezra Something To Do, Please,” but I figured at least Sabine and Zeb were on the planet with them in these episodes. Hera and Chopper were pretty much relegated to the Ghost for the past two episodes in order to do repairs. This episode, that meant we’d cut away from the action to find her mostly just standing in the cockpit, commenting on how the repairs weren’t finished yet and how the Star Destroyer means they might be in danger. Except that doesn’t come to pass because the Star Destroyer buggers off to tease the new Inquisitor for next week.

This was the only disappointment in these episodes as Hera is one of my favourites in the show and not having her be part of the action really sucks because it still feels like Rebels is falling into the trap of having everything be the “Kanan & Ezra Power Hour” while the rest of the Ghost crew mill around in the background. I hope this is something that improves as this season continues.

Remember how I said it was cool to see Kanan lead the clones into battle against the Imperial walkers? Well, the reason for that is that it reminded me a lot of why I loved The Clone Wars. The sense of using action as storytelling in such a short amount of time was one of the reasons that show was so superb as you had very little downtime and the writers had to be able to convey character and drama through action moreso than dialogue.

This episode did that superbly with Kanan, Ezra and the clones all getting their moments to shine throughout the episode while never having a lull in the action. It gave me something of a Mad Max vibe and not just because this episode was based around vehicle combat in a sandstorm. Plus, having this show continue character and plot threads from The Clone Wars feels like it’s continuing to bridge the gap between the Original Trilogy and the Prequel Trilogy in order to make the saga feel like a whole story and not two stories that are marginally connected.

I’m not going to lie to you, I did get emotional at that last scene between Ahsoka and Rex. This is a perfect example of what I was saying about how great it is to see this season continuing threads from The Clone Wars. It makes this show feel connected to the world of Star Wars that came before and allows loose threads to be tied up. That, and it allows characters who I thought would never see each other again reunite in a beautiful and poignant moment. It’s moments like these that make me love Star Wars and this episode of Rebels ended on a perfect high note.