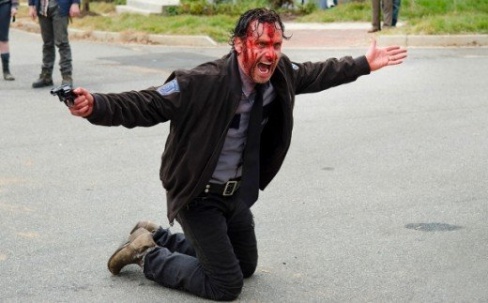 Only one episode remains in the season after this week, and the question is, will we get an episode that’s the calm before the storm or a tornado before the hurricane? There’s only one way to find out, isn’t there? Let’s take a look at this week’s episode, titled “Try”.

As per usual, spoilers will be discussed at great length. Don’t read unless you have seen the episode.

I had originally written a chronologically ordered open to this, but let’s be honest: this episode gets a whoa. There’s a legitimate chance that was the best episode of the series and it was certainly one of the most intense, if not the most intense. Everything was building, building and building to where it ended, and that was with Rick on the ground losing his mind and threatening to take over Alexandria. It makes sense, and it was something that was a long time coming. After all, he never really had that breakdown in the prison that he had in the comic, so just think of this but on delay.

But man, that was Mount Rick going full volcanic eruption. Covered in blood, flashing a gun at a crowd and saying how they need to change the rules now? That’s some serious shit. The fact it all ended with Michonne cold cocking Rick because he was losing his mind and needed to be taken down like a rabid dog was out of control. That whole thing was out of control, but it all made sense given how it was building, from Rick’s us versus them talk with Glenn, Rick and Deanna’s rather tense talk about what to do with Pete, and even Michonne’s story arc within the episode.

As I watch the show, though, I write notes. In this episode, I probably wrote more notes than I ever have, and every single one of them was complimentary (besides the stuff about the Rick/Jessie business being kind of icky). It wasn’t just the ending – which was exemplary – but other things like the whole Sasha vision quest, Glenn’s discussion with Nicholas, and damn near everything else. So yeah, this episode gets a whoa. A big damn whoa.

For quite some time, it seemed like the only thing “The Walking Dead” did well was cold opens. Everything that followed the credits may be a steaming pike of garbage, but the open? Almost always brilliant. However, the second half of this season has been mostly good (well, 4 out of 6) despite the fact its cold opens were somewhere between unnecessary feeling or genuinely lame. It’s been a weird run for the show in that regard.

Thankfully, last night’s was more of a return to form, which makes sense considering the show had a lot to build off of from last week. This week, it kicked off with Aiden’s family in mourning, as Deanna looked at a CD of Aiden’s titled “Run Mix”. She puts it in and on kicks Nine Inch Nails, and they sit in silence and take it in. That song is cross cut over most of the cold open, with this driving rock song hilariously juxtaposed over Carol making a casserole for Deanna and her family, Sasha being on watch, and Deanna rejecting said casserole (by leaving it on the porch) like an ice cold gangster. It was awesome in both a real way and an unintentionally hilarious way. Clearly the weight of the events from last episode – both the death of her son and Gabriel’s no good turncoat revelations about Team Rick – is burning Deanna, who literally burns the card Carol leaves with the casserole, and it does a remarkable job of setting the tone for the episode. A+ cold open, and that’s without even factoring in Daryl and Aaron finding a light in the woods when they’re off on a recruitment drive. BONUS!

3. Nicholas and, by proxy, Alexandria can go to hell

The first scene post credits was Deanna viewing the tape of her interviewing Nicholas on camera crosscut with Glenn recapping what happened in the last episode to Rick. It was exceptionally handled, as Nicholas’s fabricated version of the story intercut with Glenn’s reality check led to a really cool, high tension version of what was effectively a recap of the previous episode. That was really stellar, but it led to a scene that might have been even better.

I really, really loved it when Glenn confronted Nicholas. He doesn’t even know that the guy lied. He just knows that by his very nature, Nicholas is dangerous, both to himself and those around him. I particularly liked this bit:

Nicholas: “Are you threatening me?”

Naturally, because he’s an idiot, Nicholas’s response was to get a gun he stashed in the woods, but Glenn is exactly right. Hell, Rick is actually right in theory. In execution? Mayyyyybe not so much. He’s going a little batshit crazy. But it’s hard not to watch this section of the show and wonder how these people are still alive. Deanna can’t sniff out a liar to save her life. Nicholas and Aiden were in leadership positions and they’re a dead and alive idiot respectively. Their surgeon beats his wife and is apparently drunk all the time, and Deanna is cool with that because he’s the only surgeon they have (seriously, how good of a surgeon can he be when he’s drunk at all times? And isn’t everyone a little too cool with him beating Jessie, including Jessie?). I may not go all “Magneto was right” and wear a t-shirt saying that like Quentin Quire, but Rick’s point is strong. To survive, they need Rick and the rest of Team Rick. Even if they can’t admit it.

4. Something wicked this way comes

While it seems like we’re on course for the Rick versus Deanna (and anyone who disagrees) fight to play out in the finale, I have to imagine something bigger is coming, and that’s what Daryl and Aaron are off finding out. The mutilated bodies, the woman left to be eviscerated by zombies, and the letters carved into zombies (or previously alive people’s) heads all indicate that someone with a rather nasty disposition is operating in the nearby vicinity of Alexandria. Could it be Negan? I’m not sure. But I don’t think the showrunners would have two MVP’s like Daryl and Aaron off on an away team mission if it weren’t something that was going to pay off and pay off soon, especially with a 90 minute season finale coming our way.

5. Carl and Enid sitting in a tree

Not a big element, but can I just say I appreciate Carl and Enid getting some time together for something that wasn’t horrific in the midst of this episode? It both worked because it gave Carl something to do for once and the pair had pretty good chemistry, especially when they got in the hollow of the tree together. It was super awkward but in an adorable fashion, and I liked Enid pointing out that he’s scared of her just like she’s scared of him.

Even better, they gave her a dynamite line to play with, as she told Carl “it’s their world now, we’re just living in it” as a pack of zombies walked by. She’s exactly right, just like Rick is right for the same reasons. It’s a new world. To quote Andy Dufresne, get busy living or get busy dying. We’ll find out what they do next week.