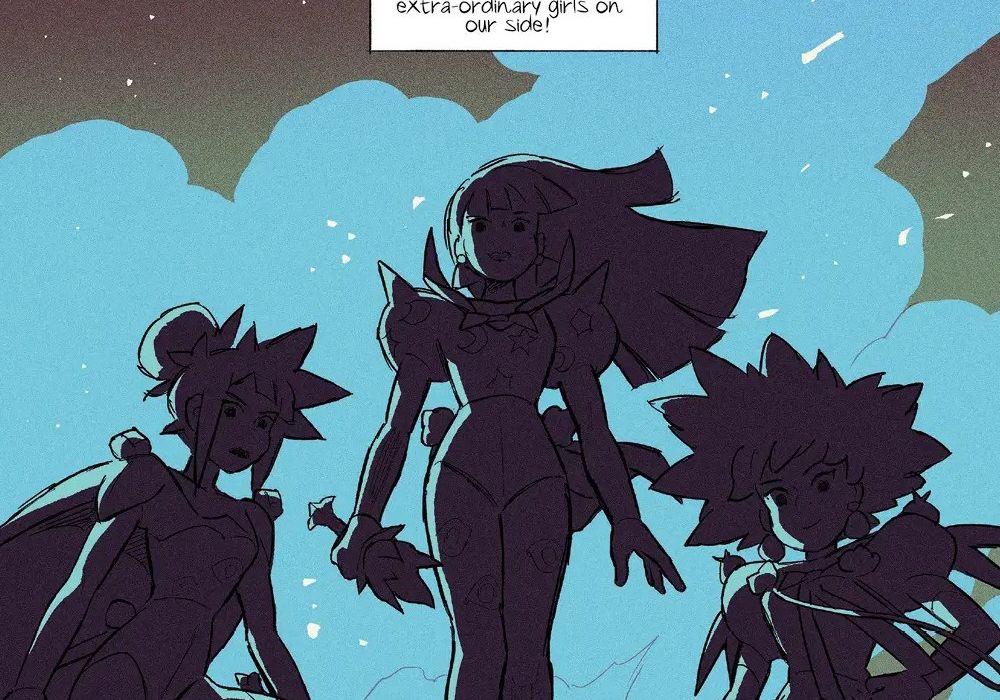 It’s been twelve years since the massive ship of an alien race known as the Agartha came into Earth space. Things have never been the same since. 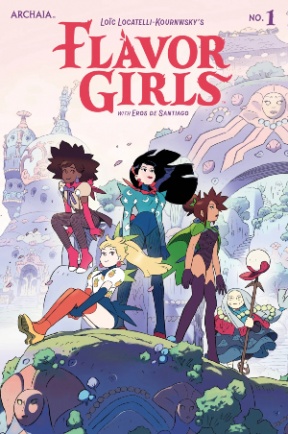 In this massive debut issue, a super powered trio known as The Flavor Girls, protects the Earth after the alien race, the Agartha arrived in their humanoid head-shaped starship causing the deaths of the welcome party and unleashing violent attacks over the years.

Right off the bat, readers will sense that this is a comic that has a lot of information to unload and is going to use as much space as possible to dole it out. We are dropped into the middle of the story, let’s call it the near future, and then are immediately given a look back at twelve years prior. An absolutely enormous starship arrives in Earth’s orbit. A mostly round structure with a human looking face at the front hovers over the planet. A team comprised of linguists and anthropologists sets off in a small ship to intercept the alien craft and welcome them to Earth. It feels mysterious yet wholesome and wondrous at the same time, until the team enters the mouth of the ship. Then all hell breaks loose and give us a sequence of real terror, death, and shocking violence.

Leaping forward to the present day of the series, we meet a young woman named Sara in Paris, France. The story then continues to give us a look at various aspects of her life, the people in it, and so on. It’s a lot to take in as the issue attempts to cram in all of the backstory of the Agartha, the Flavor Girls, Sara and her life, and then it just continues to stack characters and plot as if it all needs to be a part of this debut, and it most definitely does not. This issue is a whopping 58 pages, with 50 of that dedicated to story; and it it way too much for a first issue. The backstory and the first appearance of the Flavor Girls are far and away the best things about this premiere. It feels like every fun YA anime adventure you have ever seen.

The action and sci-fi aspects are a lot of fun and the parallels to things like The Powerpuff Girls and Sailor Moon are funny, silly, and absolutely worth a chuckle or the crack of a smile. It is at the point where Sara both meets the Flavor Girls (a name they hate, which is a great bit) and finds out that she will is probably going to be one of them soon that the issue needed to end. However, there is a whole second chapter that feels tacked on. And even though the issue moves along well enough, this extra weight added on at a point that felt like the perfect place for a cliffhanger, it just slams everything to a halt and my interest began to wane drastically.

Giving readers a wealth of knowledge can be great; I love a lot of lore for world building, but to put out a premiere issue that blatantly feels like you’ve just smashed the first two issues together it feels to be just that. Especially when this next chapter is very much a different part of the story and is the next jumping off point for Sara and the Flavor Girls. They should have held off on giving us this until the second issue. It is way too much all at once. The dialogue does move. It feels like any whiz-bang animated series and it starts off really strongly until it attempts to do too much. It will have its fans, but it gets lost half way through.

Locatelli-Kournwsky’s art style is that of classic pop manga or anime. Being a French creator living in Japan, his varied inspirations and cultural touch points are evident throughout and make for a unique experience. The work is very cute and fun so when more adult content is shown it is a bit shocking. Throughout the issue, his style changes every so slightly depending on the mood or scenario and it’s interesting shift and blend to see. It gets cartoonish like a kid’s anime or YA manga, and it hits some more mature and serious looks like a Miyazaki film, and then morphs to other vibes altogether. Along with the illustration changes, the color work morphs as well and you can see where his and De Santiago’s colors take over, in a great way. It is like two filmmakers working in tandem and it’s a great touch.

Final Verdict: 6.0, A fun, bubblegum teen superhero manga adventure that is unfortunately far too over-stuffed for its own good.