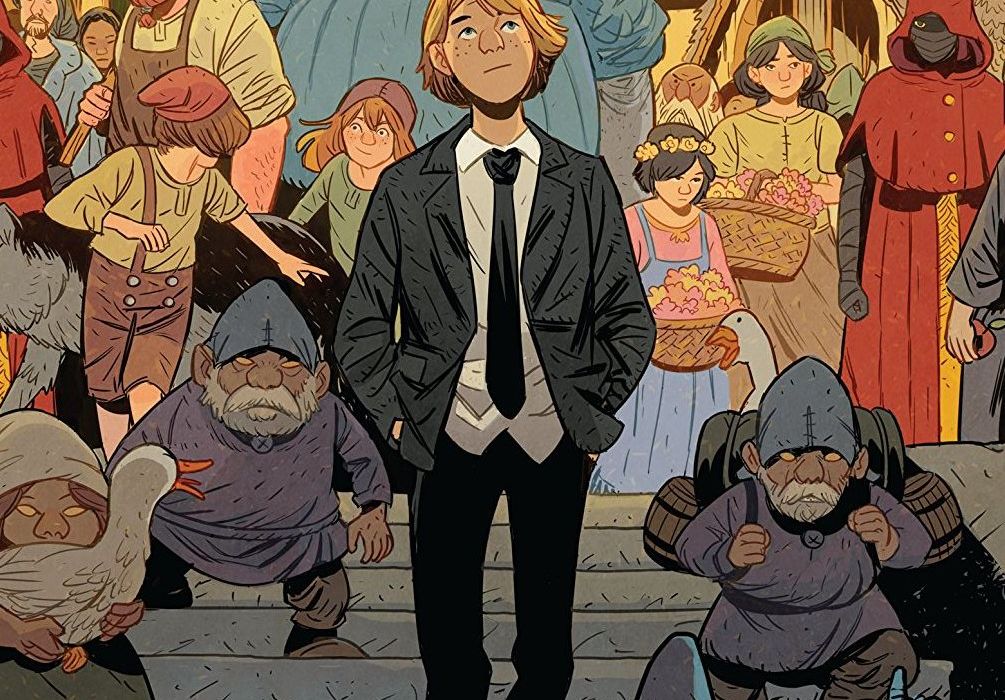 “Folklords” is a fun spin on the parallels between our world and the world of magic and fairy tales. Spoilers Ahead! 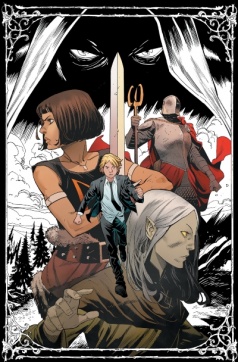 In the long history of fantasy and adventure stories we see a hero, like Luke Skywalker or Harry Potter, leave a mundane life to become a hero in a world they never knew existed or understood. In “Folklords” #1, our hero Ansel lives in a place filled with magic and fantastical creatures, but he dreams of our world, literally. At night he sees modern technology, skyscrapers, and people hurrying about their lives – and wants to be a part of it.

Ansel lives in a fantasy world. He sees wizards and forest trolls on a daily basis, but this is all he knows. His future is based not only how he does in school, but on a quest that all young adults most go on. This quest can be one of countless options, but each student must declare their desired quest and why they have chosen that particular adventure. While some students look to find magical artifacts or battle unknown creatures, Ansel seeks out the Folklords. A myth that even those closest to him believe to be nothing more than a story. Ansel is determined and believes these mystical beings will lead him to this other world he dreams of every night.

Writer Matt Kindt (“Mind MGMT,” “Suicide Squad”) gives us a great character to follow with Ansel. He is more or less a typical fantasy hero archetype, but with that slight twist of already living in a magical realm. Kindt subverts our expectations right after the first page. We see a teenage boy getting ready for school, moving about his room and the rest of the house, talking to his mother, and heading out the door with his book bag. We get a few small details that seem only slightly odd—a wooden wristwatch, and an odd looking radio device, but it comes off as nothing more than rustic hipster possessions. Not until he steps out into the street do we realize that he is a resident of an otherworldly village. It’s a nice little surprise right at the opening of the story.

Ansel’s watch, tie, jacket, etc. keep him on the outside of his village. Most of the villagers look at him like he is crazy and have absolutely no way of understanding why he is the way he is. This doesn’t stop him from being somewhat popular in school and being part of a nice group of close friends. When Ansel tells his classmates that he plans for his quest to be a search for the Folklords they either laugh it off or show concern for their friend. It seems as though this is a forbidden subject and even talking about it can be a punishable offense.

We get small glimpses some world building and Ansel’s various relationships with friends, classmates and the other beings that live in the area, but Kindt isn’t ready to give us everything just yet. This first issue is a nice introduction this this land and some of the plot devices that will come to play in the coming chapters. While we have yet to get a really good look at the greater world at play, the characters and relationships feel real. Kindt writes a nicely paced script that gives plenty of story without ever getting long-winded or self important. “Folklords” #1 is a nice breezy read that is good for fantasy readers of almost any age.

Helping with the creation of this world is Matt Smith (“Barbarian Lord”). His soft edged character designs keep things looking friendly and fun. It is a style that feels both familiar and wonderfully inviting, even when the story veers closer to its darker aspects. Even though Smith’s style lends itself to a more animated look that comes off as quick and minimalist, at closer inspection his detailing is nicely specific and expertly done. It’s work like this that reminds us that simplistic and simple are not the same thing. Colorist Chris O’Halloran (“X-23,” “Ice Cream Man”) lends his masterful hand to this series, elevating the work as a whole. His eye for adjusting the entire color scheme based on the tone of each part of the book is wonderful. He truly makes this world feel like a living, breathing place where lives have gone on for centuries.

Jim Campbell (“The Amazing Spider-Man”) does some wonderful lettering on this book. Juxtaposing a standard typeface for the speech bubbles with a handwritten style for text boxes, it all captures the fairy tale vibe while still including a modern graphic storytelling style. You can’t do much better than having Campbell letter your comic.

The components of this story are familiar, but the way the pieces are laid out is refreshing and quite different from most of what is out there. The entire package was a pleasant surprise. There are more than a few fantasy miniseries that come out each year and without a top notch creative team they can easily get lost in the shuffle. This is an impressively strong premiere that has a little bit of something for any comic book reader. Readers looking to pick up a quick and immensely enjoyable read can’t do much better than this. And those looking for a short term commitment will be pleased to know this will be a five-issue run.