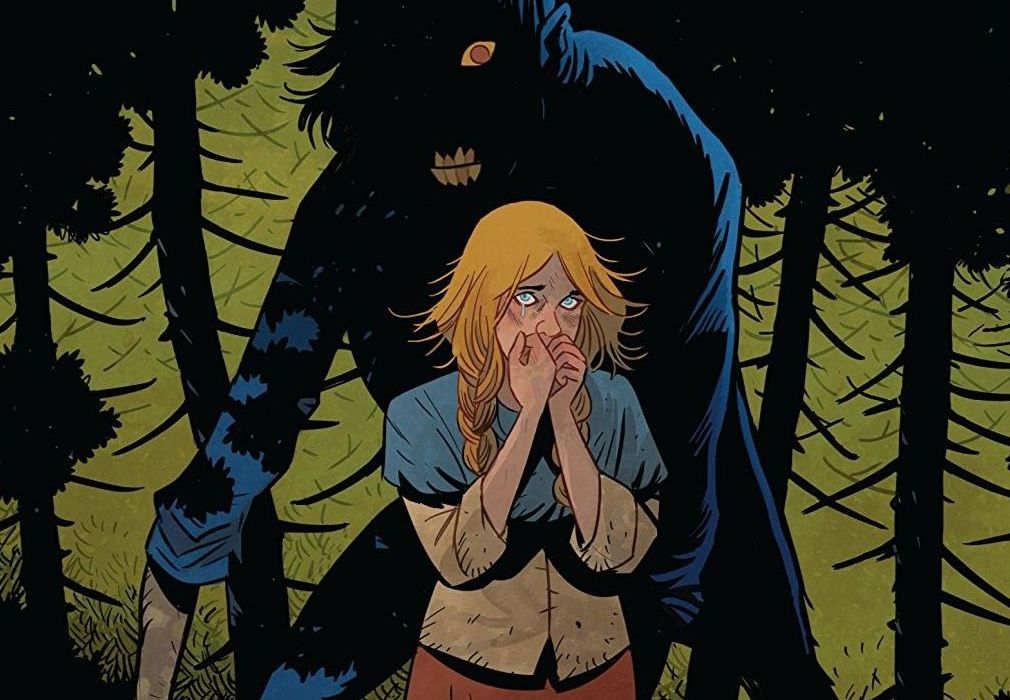 Folk tales are stories that usually had morals. “Don’t go into the woods.” “Don’t talk to strangers.” “Listen to your parents.” In most of these tales, children would break the rule and then be tormented by the monsters they were warned about. “Folklords” #3 begins with the promise that the narrator is “not the voice that’s going to hold your hand through this,” that they are “just as in the dark as you are.” With this promise, it’s clear that Matt Kindt wants to take our preconceived notions of folk stories and turn them on their heads. While this is not necessarily an original idea, (in fact, you can watch a trailer at this very moment for another “dark” version of Hansel and Gretel) here it works better. It has largely to do with the execution. 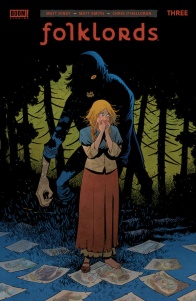 Cover by Matt Smith
Written by Matt Kindt
Illustrated by Matt Smith
Colored by Chris O’Halloran
Lettered by Jim Campbell
Outside of the village, life is no fairy tale—and Ansel has learned this the hard way. Betrayed by one of his traveling companions, Ansel finds himself at the mercy of Hanz and Greta. He needs to escape before the worst happens, but the siblings have a story for him, and the truth is more gruesome than he could have imagined.

The issue presents the reader with three “monsters” and plays with the audience’s expectation of what makes a monster. The thing is that the creative team really takes advantage of the comic book medium to play with your expectations. The combination of art, script, and lettering help to paint three distinct pictures of what it means to be a “monster” in the “Folklords” world. Hanz is the most obviously monstrous. His body has been warped by the tainted candy of the librarian in the candy cabin designed to remove the threat of runaway children from the library. He is large and hulking, his face grotesque. He also revels in the torture of their victims. Yet, the combination of the script and lettering betray an almost childlike innocence. He refers to torture implements as toys. Does this atone for the horrible things that he does? No, but it’s clear that he is the muscle, not the brains.

Next is Ugly. Ugly is the character that the world of “Folklords” #3 treats most like a monster. She has been pushed to the edges of society, even to the point of calling herself the name that people have given her, “Ugly.” Ugly is drawn as large and brooding, yet not exactly monstrous in the same way that Hanz is. The narrator tries to convince her she shouldn’t let others define who she is, but Ugly brushes off this notion as naivety. The world has made her a monster, and that’s how she sees herself. The trick is that while prickly, Ugly has a soft heart. Ugly’s lettering is presented in such a way that suggests a deeper rumble when she speaks, a kind of gruffness. Unlike Hanz’s lettering, though, it is very controlled. Jim Campbell’s lettering makes you look at these two characters who probably would sound similar in an audio medium, and gives them distinct personalities. That’s not an easy feat!

The final monster is Greta, who on the surface is the least monstrous of all. Matt Smith’s design on Greta invokes classic illustrations of childlike innocence. She sits calmly, her head tilted in curiosity, quietly working on her drawings. Her dialogue, too, is presented in very straightforward and matter-of-fact lettering. She’s describing horrific acts like torture and cannibalism but with all the enthusiasm of cooking dinner. But while she looks and sounds innocent, her illustrations of her victims show how disturbed she truly is. Her illustrations are monstrous, with elongated and haunted features. They help to sell the monster she has become, hidden behind mundane features. The exploration of being a monster in “Folklords” #3 is interesting, the problem is that it took a few passes before realizing how the issue balanced the art, script, and lettering to sell the idea.

The book has other strengths. There is a really interesting mystery element in “Folklords” #3. Ansel is having visions of the world of the folklords, visions that give him access to technology that doesn’t match the world they live in. It appears that this isn’t the first time that people have access to this knowledge. Hanz and Greta were put into their current situation because they attempted to escape the library, a library that seems to have access to more books of forbidden knowledge from the world of the folklords. The interactions between the narrator and Ugly were also a lot of fun. There’s power in an odd couple and these two seem like the perfect pair for high adventure and banter. Matt Kindt writes both the characters in such a way that you want to see them go on further adventures.

I’ve already talked about how the character designs help to tell the story about who is and isn’t a monster, but the rest of the art is also really good. Chris O’Halloran’s color work really helps to enhance the shadows and thus increase the menace of the situation the narrator finds himself in. The shadows create a sense of dread, unknown just how big the dungeon is or what other torture devices are being hidden from him. The woods as well feel like they are worthy of being in a Brothers Grimm story. They are dense and looming, something you wouldn’t want to get lost in, hiding the monsters of the forest. Knowing that our traveling pair is going in there makes them that much more daunting.

On my first read, I thought “Folklords” #3 was interesting, but I couldn’t put my finger on why. The more I thought about it, though, I realized the story worked because it used the comics medium to help tell the story he wanted to tell, that not all monsters looked or acted the same. By achieving this through character design, coloring, and lettering, it shows what comics can do.

Final Verdict: 7.3 “Folklords” #3 is a book that uses every aspect of the medium to tell a story about the true nature of a folk tale monster. While impressive, it does take some time to realize just what the creative team is up to.