The Frankenstein creature discovers a whole other world underground this issue… 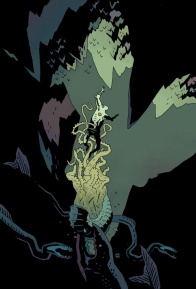 Chased by his tormentors into the center of the earth, Frankenstein’s monster becomes prey for a different kind of creature.

First up, “Frakenstein’s creature,” while the correct name for this story’s protagonist, is a little long. Henceforth I shall refer to him as Frank. It should make writing this easier.

Secondly, how nice is it to have Mike Mignola doing covers for this series? With so many Mignolaverse titles coming out now, and with Mignola so busy writing various books and drawing Hellboy in Hell, he’s not even doing all the trade covers anymore. The covers are in good hands, of course, but a Mignola cover now has a sense of occasion. If you’ve been keeping up to date with solicitations, then you’ve already seen all five covers (six if you count the ECCC exclusive), and they just get better as this miniseries gets closer to its conclusion. (Issue 5, wow!) There’s plenty of visual cues in them indicating the depths that this story will plunge into the history of the Hellboy Universe. This book will definitely go interesting places.

That said, this issue is much lighter on those elements. It’s not about the grand mythology, but rather about discovering a dangerous and exciting new world. It’s about turning a corner and seeing some crazy-looking beast, never realising that another one is behind you… The message is clear: this is a part of the Hollow Earth we’ve never seen before, and it’s not to be messed with. It’s less civilised than the glimpses in B.P.R.D.. This world is wild and full of of monsters.

Ben Stenbeck appears to be having a lot of fun here. After drawing Baltimore for several years, a series that spent a lot of its time in villages, towns, and castles, he gets to draw caves and underground pools, and obviously a lot of monsters. I think that sums up the spirit of this issue too. This isn’t a deep and thoughtful issue (though it has its moments), but rather an issue focused on its world and the protagonist’s relationship to it. I haven’t read Edgar Rice Burroughs’s Pellucidar books (which Mignola cited as one of his inspirations for this title), but I’ve read his Mars books and a couple of Tarzan books, and Mignola’s definitely channeling Burroughs here.

Frankenstein Underground feels very classical to me. Maybe it’s the Burroughs factor, maybe it’s Frank beating up monsters in typical Hellboy style, but I think a lot of it comes down to Ben Stenbeck. He’s a fantastic artist to have on Mignola’s books, because he seems to have this uncanny ability to summon up elements previously drawn by other artists without feeling different. Stenbeck’s Marquis Adoet de Fabre feels like Guy Davis’s de Fabre in B.P.R.D.: The Universal Machine. He doesn’t just get the physical appearance right, he gets the mood right, the body language. He channels the performance of Guy Davis’s de Fabre, and he does it exceptionally well. Stenbeck’s de Fabre feels authentic. Look at the way Guy Davis draws de Fabre when he’s in control versus when he is angry. Now look at Stenbeck’s de Fabre. He’s respected the choices made by the artist before him and built on it.

He’s been on his own book for a while now with Baltimore, so it’s one of Stenbeck’s abilities we haven’t seen in a while, not since B.P.R.D.: The Ectoplasmic Man in 2008 and Witchfinder: In the Service of Angels in 2009. Since then, his drawing has become much more expressive, and his attention to performance has become even more impressive. The demons, Iblifika and Marchosias, were captured perfectly. There was a panel in there where I could see the same soul staring out of Marchosias’s eyes. It was very nicely done indeed.

OK, getting into spoilery territory now…

Stenbeck also seems very comfortable with Mignola-esque storytelling moments. The flashback sequence in the latter half of the comic, with the statue of Mary watching a scene of violence unfold before her, is one such moment. Either Mignola thumbnailed that sequence, or Stenbeck just understood exactly what was needed and captured it perfectly. Mignola and Stenbeck seem to synchronise very harmoniously.

Frank doesn’t go to Hell in this story, but this issue certainly plays up the similarity between Hellboy entering Hell and Frank entering the Hollow Earth (especially the bit with the tentacles glowing in the dark). It makes sense too. Frank carries the weight of the violent life he’s lived, defending himself against people that had hurt him just for how he looks. This underground world is interpreted through his guilt as his damnation. It certainly fits with what he’s read about Hell being underground and full of suffering.

His reaction to being condemned is interesting. Yes, he fights against it, but there’s also a certain amount of resignation in him. Part of him believes he deserves whatever punishment awaits him in the bowels of the Earth. I hope this aspect of the character is something we’ll see explored more in future issues. At the moment, I’ve no idea how close to the creature in Mary Shelley’s novel is to Mignola’s Frank. In Shelley’s novel, the creature did some pretty horrific things, killing innocent people to lash out at his creator. Frank is certainly capable of murder. He’s killed before in Hellboy: The Midnight Circus, and if he didn’t kill the man in the church during this issue’s flashback sequence, then he certainly left him horribly beaten. There’s an anger he lets out in these moments that Frank seems deeply ashamed of. I’ll be very interested to see how Mignola reconciles the novel’s creature with his Frank.

Oh, and then there’s the mystery of who these red-eyed, underground people are. They certainly aren’t the Hyperborean slave race we’ve seen before, but they don’t appear to be human either. I don’t know… Maybe they’re some ruined off-shoot of the Hyperboreans? One thing’s for sure, that city on the last page is Hyperborean. I guess I’ll just have to patiently wait for the next issue to find out…

This issue flew by. It’s mostly action, so it seems a little short, but it’s beautifully handled. Ben Stenbeck is doing his best work on this series. I can’t wait to see where it goes…